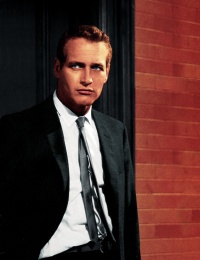 Paul Newman (January 26, 1925 – September 26, 2008) was an American actor, film director, producer, IndyCar driver, entrepreneur, activist, and philanthropist. He won and was nominated for numerous awards, winning an Academy Award for his performance as "Fast Eddie" Felson in the 1986 film The Color of Money, a role he originated in 1961's The Hustler. Newman's other roles include the title character in Cool Hand Luke (1967), as well as two collaborations with actor Robert Redford: Butch Cassidy and the Sundance Kid (1969) and The Sting (1973) as well as the 1982 court drama The Verdict. He was 83 at the time of his death.