Butch Cassidy and the Sundance Kid

Butch Cassidy and the Sundance Kid is the classic 1969 Western that marked the first onscreen pairing of Paul Newman and Robert Redford, who portray the title characters. The film was directed by George Roy Hill, who would later reunite with the duo for the Academy Award-winning 1973 film The Sting. William Goldman (Marathon Man, A Bridge Too Far, All the President's Men), wrote the screenplay. The cast included Katharine Ross, Jeff Corey, and Ted Cassidy. A prequel, Butch and Sundance: The Early Days was released in 1979.

The following weapons were used in the film Butch Cassidy and the Sundance Kid: 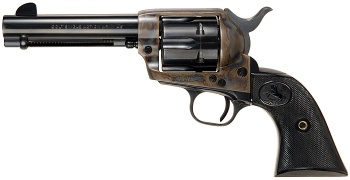 The Sundance Kid (Robert Redford) holds a Single Action Army as he reacts to shooting a snake in the canyon.

Butch's SAA sits in his holster.

Sundance aims for the posse surrounding them.

Sundance cleans his SAA as Butch and Etta practice their Spanish.

Butch Cassidy (Paul Newman) lines a group of Bolivians against a wall during their first bank robbery.

Sundance holds his SAA on a bank manager.

The Bolivian bandits drop their SAAs as Butch and Sundance shoot them.

Butch shows Sundance his lack of ammunition when the two are holed up in San Vincente.

Sundance dual-wields his and Butch's SAA revolvers during the shootout with the Bolivian police.

Sundance looks for his next targets.

Butch and Sundance load their guns for the last time.

Butch and Sundance run out shooting in the infamous "blaze of glory".

When confronting the Bolivian bandits, Butch's Single Action Army appears to have been replaced in some shots with a double-action, modern Colt Police Positive revolver modified to resemble the SAA. This kind of prop was frequently used in Westerns (see the Police Positive below), when a Single Action Army was required to be discharged with the speed required by the script. 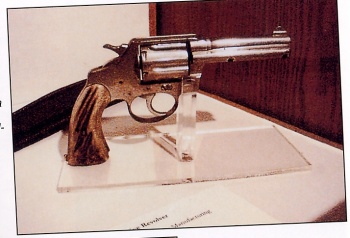 Colt Police Positive, modified to look like a Colt SAA

Butch and Sundance shooting at the Bolivians. The revolver used by Butch (Paul Newman) appears to be a double-action, modern Colt Police Positive revolver modified to resemble the SAA.

Another shot of Butch with the revolver.

Butch fires the revolver despite that he appears to miss fanning the hammer.

A guard watching over Hole in the Wall carries a Winchester Model 1892. Some of the Bolivian soldiers in the film's climax carry them as well.

A Hole-in-the-Wall guard holds the Winchester as he watches as Butch and Sundance approach.

Bolivian soldiers line up to shoot Butch and Sundance.

Some of the Bolivian soldiers in the film's climax carry Remington Rolling Block rifles. Some of them seem to be sportized versions, converted from full-size military rifles (note the rude look of the forearms).

Bolivian soldiers line up to shoot Butch and Sundance.