Man of Steel is the 2013 feature film adaptation of the DC Comics superhero. The film was directed by Zack Snyder (Watchmen) and produced by Christopher Nolan (The Dark Knight trilogy). The film, which is a reboot, stars Henry Cavill as Superman, Russell Crowe as Jor-El, Kevin Costner as Jonathan Kent, and Michael Shannon as General Zod. The film marked the beginning of what is now known as the DC Extended Universe, which includes Batman v Superman: Dawn of Justice, Suicide Squad, Wonder Woman, Justice League, Aquaman, and Shazam!.

The following weapons were used in the film Man of Steel:

Beretta 92FSs are carried by various US troops in holsters. Colonel Nathan Hardy (Christopher Meloni) uses one during the battle in Smallville. A pilot aboard a C-17 Globemaster also uses a Beretta.

Lieutenant General Swanwick (Harry Lennix) has a holstered Beretta 92FS on his right hip during his first encounter with Faora-Ul (Antje Traue).

A USAF pilot fires his Beretta 92FS at Faora-Ul before receiving a swift snap to the neck.

A Heckler & Koch MP5K is taken from a dead pilot and used by Col. Nathan Hardy (Christopher Meloni) during the battle in Smallville, Kansas.

A US soldier aims his M4A1 at Superman.

US soldiers and airmen who confront Superman are armed with M4A1s.

Faora-Ul faces a US Army Ranger armed with an M4A1 Carbine.

US Army Rangers aim their M4A1 Carbines as they approach a vehicle wreckage.

While escorting Superman (Henry Cavill), a USAF Pararescueman is seen with a suppressed Mk 18 Mod 0.

The PJ on the left holds the suppressed Mk 18.

Several US soldiers and USAF airmen can be seen with M16A2 rifles when Superman (Henry Cavill) approaches a US Air Force base for his detainment.

On the left, a USAF airman takes aim at Superman with an M16A2.

US troops can be seen with M249 SAW machine guns.

A USAF airman is armed with an M249 machine gun.

A USAF parajumper fires an M249 machine gun at a Kryptonian soldier.

The Browning M2HB heavy machine gun is mounted on an M1 Abrams tank.

The Browning M2HB heavy machine gun is mounted on an M1 Abrams tank.

An M1 Abrams crewman mans a Browning M2HB during Superman's arrival at an Air Force military base.

The M240D machine gun is mounted on M1 Abrams tanks.

An M240D machine gun is mounted on the right side on M1 Abrams tank turret.

One of the US Army Rangers is armed with an M4A1 Carbine fitted with an M203A1 Grenade Launcher.

One of the soldiers is armed with an M4A1 Carbine fitted with an M203A1 grenade launcher.

A Special Forces soldier fires a Milkor Mark 14 grenade launcher during the final battle in Metropolis.

A US Special Forces soldier fires a Milkor Mark 14 at Faora-Ul. Firing such a weapon aboard a jet aircraft doesn't seem like a particularly smart move.

One of the Rangers carries an M26 MASS shotgun attached to an M4A1 Carbine.

One of the Rangers carries an M26 MASS shotgun attached to an M4A1 Carbine.

An M2 Bradley armed with an M242 Bushmaster chaingun is also seen in the film.

The M2 Bradley armed with an M242 Bushmaster chaingun.

On the left, an M2 Bradley armed with an M242 Bushmaster chaingun confronts Superman. 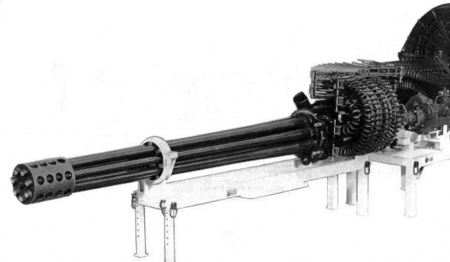 The A-10 is also armed with AGM-65 Maverick air-to-surface missiles and AIM-9 Sidewinder air-to-air missiles.

An A-10 about to make a strafing run with its GAU-8/A Avenger.

A forward facing view of the Avenger making a strafing run on a town street.

Pylon-mounted GE M134D Miniguns alongside 2.75 rockets are seen as the armament of the AH-6 "Little Bird" helicopters during the battle in Smallville.

An AH-6 "Little Bird" armed with the GE M134D Minigun as it approaches Smallville.

An AH-6 "Little Bird" firing its GE M134D Minigun at Superman, Faora-Ul, and a Kryptonian soldier.

The F-35 Lightning IIs are armed with General Dynamics GAU-22/As during the final battle in Metropolis.

F-35 Lightning IIs in formation as they approach Metropolis.

An F-35 Lightning II is suddenly pushed downwards by the immense gravitational force of the Kryptonians' "world engine".

An M136 AT4 rocket launcher is carried by a US Army Ranger during the battle of Smallville.

An M136 AT4 can be seen on the back of the US Army Ranger on the left.

In addition to the Bushmaster chaingun, the M2 Bradley IFVs are armed with twin-tube BGM-71 TOW launchers mounted on the side of the turret. 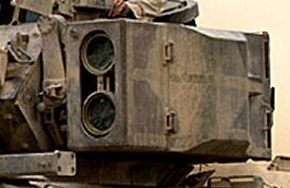 An M2 Bradley with the twin-tube TOW launcher in firing position on the left side of the turret.
Retrieved from "https://www.imfdb.org/index.php?title=Man_of_Steel&oldid=1530421"
Categories: