Jurassic World: Fallen Kingdom is the 2018 science-fiction adventure sequel to 2015's Jurassic World and is the fifth installment in the Jurassic Park feature film series. Three years after the Jurassic World incident, Claire Dearing (Bryce Dallas Howard) has become the head of an organization called the Dinosaur Protection Group, and is campaigning to allow the DPG to rescue Isla Nublar's dinosaurs and relocate them, as Nublar's once dormant volcano is increasing in activity with an eruption imminent. After the US government resolves to not intervene in saving the dinosaurs, Claire enlists the help of former Velociraptor trainer Owen Grady (Chris Pratt) to assist the rescue expedition, which is funded by Benjamin Lockwood (James Cromwell), John Hammond's former partner. However, a conspiracy is brought to light that reveals the expedition's true goals. The film, which was directed by J.A. Bayona, also stars B.D. Wong and Jeff Goldblum, reprising their roles as Doctors Henry Wu and Ian Malcolm, respectively. Co-starring are Justice Smith, Daniella Pineda, Rafe Spall, Ted Levine, Toby Jones, Isabella Sermon, and Geraldine Chaplin.

The following weapons were used in the film Jurassic World: Fallen Kingdom:

While on Isla Nublar, Ken Wheatley's (Ted Levine) mercenaries are primarily armed with the FN SCAR-L. Most of them are fitted with EOTech EXPS2 holographic sights.

A group of mercenaries all armed with the FN SCAR-L.

A group of mercenaries gaze at a Brachiosaurus roaming the ruins of Jurassic World's Main Street.

Three of the mercenaries riding inside a BAE Systems Land & Armament Caiman, carrying their FN SCARs.

A mercenary pulls the charging handle on his FN SCAR. Note that this shot is reversed, as can be seen from the lettering of the Ikaros flare.

A mercenary (Paul Sockett) holds up the FN SCAR-L.

The majority of the mercenary guards at the Lockwood estate primarily carry the SIG SG 552. Owen Grady (Chris Pratt) and Claire Dearing (Bryce Dallas Howard) are also seen with the SIG SG 552. The SIG SG 552 also makes a prominent appearance when demonstrating the abilities of the Indoraptor.

Closeup of the SIG SG 552 laying next to Dan.

One of the mercenaries is seen brandishing a Benelli Supernova when confronting Owen and Claire.

The mercenary on the far right, armed with a Benelli Supernova.

A Mossberg 500 Cruiser is seen used by one of Wheatley's mercenaries when Owen and Claire are discovered.

The mercenary on the far left is aiming a Mossberg 500 Cruiser.

The pistol can be seen in the mercenaries' thigh holsters.

A mercenary (Jeremy Gilbert) pulls his P226R on "Blue".

The mercenary fires the P226R. 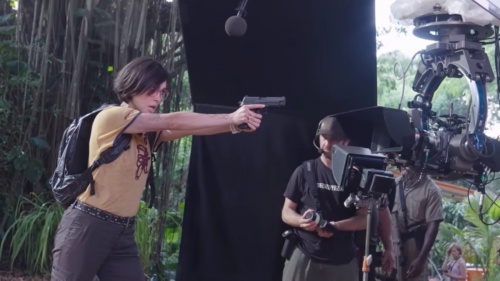 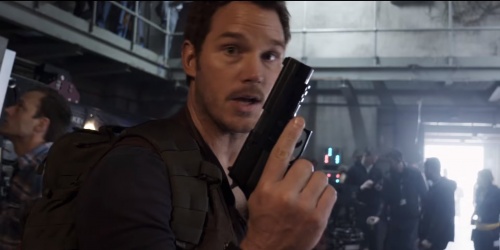 Owen Grady (Chris Pratt) with a P226R in behind-the-scenes footage.

Ken Wheatley (Ted Levine) carries what appears to be a 4" Smith & Wesson Model 500 revolver as his sidearm. 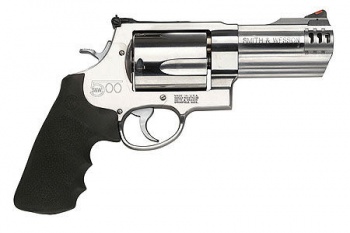 A nice view of the grips on the revolver. Interestingly the leather pouches on Wheatley's bandolier are actually magazine pouches for the MAS-49 rifle

Owen is threatened with the 4" Smith & Wesson Model 500 revolver.

Some of Wheatley's mercenaries can be seen with the FN 40GL mounted on their FN SCAR-Ls.

Two mercenaries can be seen with the FN 40GL mounted on their FN SCARs.

The mercenary to Zia's right has an FN 40GL mounted on his FN SCAR.

Ken Wheatley (Ted Levine) is seen using a customized tranquilizer rifle throughout the film. The mercenary that is tackled by Blue also wields the rifle. While purely fictional in design, the rifle appears to take design cues from a Heckler & Koch G36, notably the inconspicuous magazine well and also the Dan Inject Model JM, as for the green aluminium body, carry handle, CO2 cartridge and muzzle. The prop also seems to feature an airsoft crane stock.