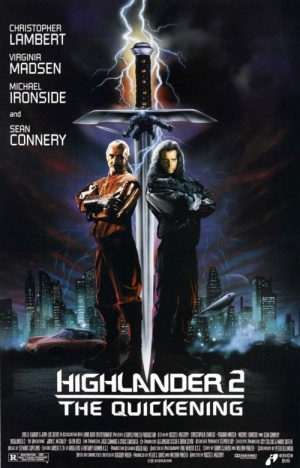 Highlander II: The Quickening is the 1991 follow-up to 1986's Highlander. Russell Mulcahy returned as director and Christopher Lambert and Sean Connery reprised their roles. Virginia Madsen and Michael Ironside joined the cast for this installment. The film was heavily criticized for its incongruities with the previous film and several recut versions were released in the years following its original theatrical run.

The following weapons were used in the film Highlander II: The Quickening:

General Katana's men with a Muzzlelite Mz14 bullpup on the right.

One of General Katana's men is seen buttstrokeing a rebel with a Franchi SPAS-12 Shotgun. it is a short barreled model with the stock removed.

General Katana's men hitting a Rebel with a SPAS 12.

Several fighters on the alien planet are seen with some form of blaster rifle.

General Katana's men with a Blaster rifle on the left.

Members of an anti-corporate enviromentalist group use FMK-3 submachinguns when infiltraiting the Shield control center.

Guards at the Shield control center are armed with FN FAL 50.63 rifles.

Corda (Pete Antico) holds what appears to be a Smith & Wesson Model 19 on Katana (Michael Ironside). 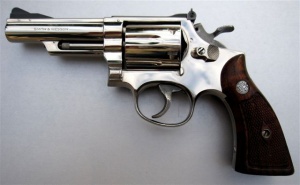 The soldiers of Shield Corporation are armed with Heckler & Koch HK94 submachine guns.

MacLeod fire on guards on the gallery, ...

... then passes the weapon to Louise.