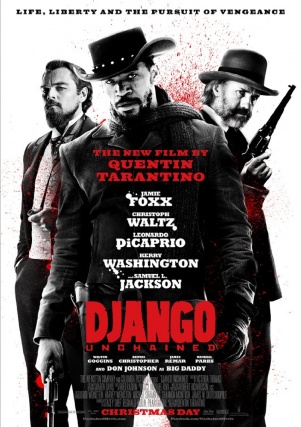 Django Unchained is a 2012 "Southern" (as the film has elements of the Western, but takes place primarily in the southern United States of 1858) that was written and directed by Quentin Tarantino. The film stars Jamie Foxx as Django Freeman, a slave who is liberated by a bounty hunter named Dr. King Shultz (Christoph Waltz) in order to track down and eliminate the notorious Bittle Brothers of whom Shultz has no knowledge of appearance. If the brothers are brought to justice, Shultz promises to aid Django in his quest to find the man who has enslaved his wife and rescue her from his clutches. The cast includes Leonardo DiCaprio, Don Johnson, Walton Goggins, and Samuel L. Jackson. The film's name is a homage to the 1966 Italian Western Django that starred Franco Nero (who also has a role in this film). According to IMDb.com, the armorers for the film are Tony Didio, Jr. and gunsmith Larry Zanoff.

The following weapons were used in the film Django Unchained:

Dr. King Schultz (Christoph Waltz) and Django (Jamie Foxx) use Cobra "Big Bore" Derringers as their secondary weapons. They are attached to drawer slides that allow for quick pistol drawing. They are both polished steel with pearl grips which means they are duplicates or in fact the same pistol. Since the film takes place in 1858, the use of a double barrel Derringer would be anachronistic (Remington introduced this style in 1866 after the Civil War). The Cobra "Big Bore" Derringer seen in the film is a modern version of the Remington derringer. 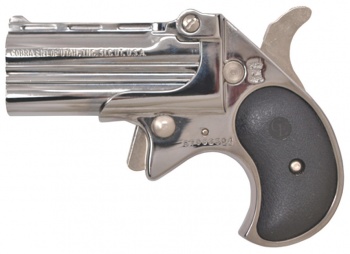 A close up shot of the pistol. The ventilated rib identifies it as a modern Cobra replica. 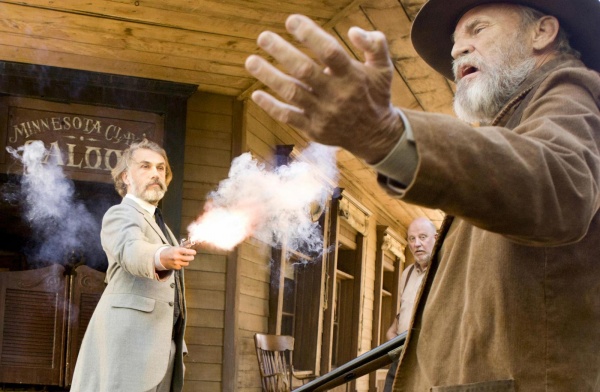 Django fires the Remington during the mansion shootout. 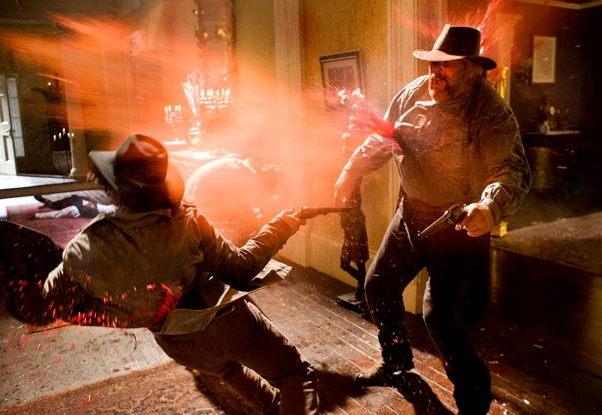 Candyland Cowboy (Tom Proctor) is shot, while holding the Remington. The gunman at the left holds the Colt Navy.

In a deleted scene from the trailer, Django (Jamie Foxx) spins a Remington 1858 New Army in his right hand and a Colt 1851 Navy in his left hand. On the left, the color of the blood spatter was darkened in order to pass MPAA standards for "Green Band" trailers.

In a deleted scene from the trailer, Django (Jamie Foxx) with a Remington 1858 New Army in his right hand and a Colt 1851 Navy in his left hand.

Django fires the revolver with a brass frame.

The Sheriff's model of the Remington 1858 appears to be the revolver carried by Django throughout much of the film. A nickel (or stainless repro) version is carried by Billy Crash (Walton Goggins).

Closeup of the revolver fired by Django. 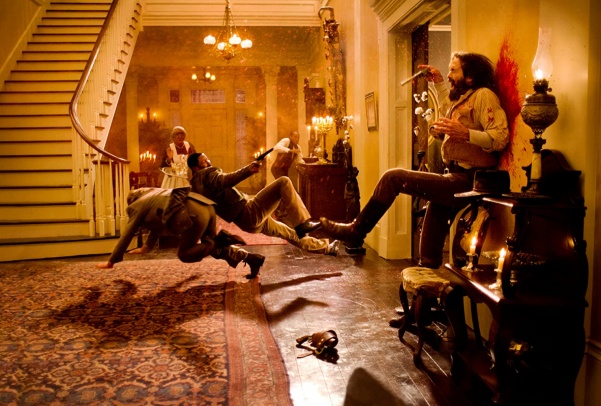 Gilles (Craig Stark) drops his Colt, while being shot by Django.. 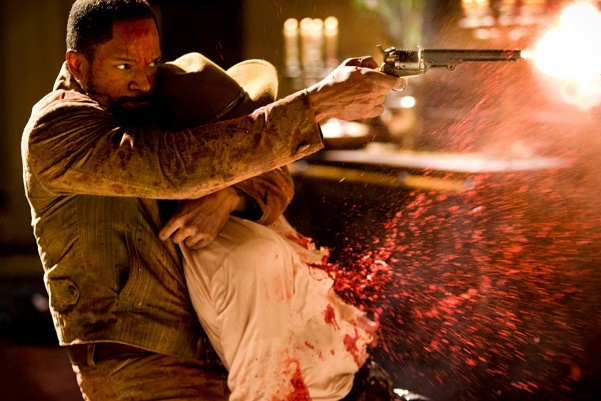 In a deleted scene, Django (Jamie Foxx) spins both a Colt 1851 Navy in his left hand and a Remington 1858 New Army in his right.

Another The LeQuint Dickey Mining Co. Employee (Quentin Tarantino) has the revolver holstered.

Lil' Raj Brittle (Cooper Huckabee) fumbles with a third model Colt Dragoon during a confrontation with Django. Django himself then takes it from him and is seen using it.

A double barrelled percussion shotgun is first seen in the hands of Ace Speck (James Remar).

A double barrelled percussion shotgun is in the hands of Dicky Speck (James Russo).

A double barrelled percussion shotgun is in the hands of Sheriff Bill Sharp (Don Stroud).

A Sharps 1874 Buffalo appears to be the rifle used by both Schultz and Django. The Sharps Buffalo wasn't introduced until twenty years after the film's time period.

Closeup of Django with the Sharps.

A steel framed Henry 1860 rifle can be seen being used by henchmen, Django (Jamie Foxx) and Dr. King Schultz (Christoph Waltz). This weapon is anachronistic due to the movie taking place in 1858, although they could be intended to be stand-ins for the Volcanic Repeater rifles which were the immediate predecessor to the Henry rifle.

A steel framed Henry 1860 rifle can be seen being used by Dr. King Schultz (Christoph Waltz).

The henchman on the far right carries the Henry rifle.

The Spencer 1860 Carbine also appears to be carried by some of the men employed by Spencer 'Big Daddy' Bennett (Don Johnson). The Spencer wasn't introduced until two years after the film's time period.

The henchman on the near left carries the Enfield Carbine.

Django takes a Remington 1858 New Army "Cattleman's Carbine" after a standoff with Mining company men. He is seen carrying the rifle while on horseback. At the film ending, this gun briefly can be seen in the hands of Broomhilda von Shaft (Kerry Washington).

Django rides with a Remington 1858 New Army "Cattleman's Carbine" after a standoff with Mining company men.

Django with the Remington 1858 "Cattleman's Carbine".