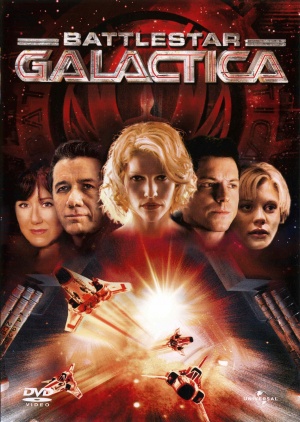 Battlestar Galactica: The Miniseries is the 2003 "reboot" of the 1978 ABC Sci-Fi television series of the same name. Originally airing as a four hour miniseries in 2003 on the Sci-Fi Channel, Galactica significantly deviated from several elements of the original series, namely changing the gender of several of the characters as well as adding Cylon characters that were very human-looking in appearance in contrast to the Cylon machines of before. In keeping with the "real-world" aesthetic of the reboot, the miniseries utilized actual firearms housed in futuristic shells or were based on real designs. Unlike the original series, these weapons fired projectiles rather than the standard laser bolts of previous sci-fi series. With the popularity of the miniseries, Battlestar Galactica would be picked up as a weekly series by the cable channel and aired for four seasons, premiering in 2004.

The following weapons were used in the miniseries Battlestar Galactica: The Miniseries (2003):

A heavily modified Smith & Wesson Model 686 L-Frame revolver is portrayed as the standard Colonial sidearm in the Battlestar Galactica mini-series. Among other features the weapon has an under barrel explosive launcher (like the old LeMat "grapeshot" barrel). The Miniseries version had hardly any real functionality and would subsequently be redesigned almost from scratch for Season 1 when scripts required more specific actions with the guns.

The gun appears to have been intentionally designed to resemble the gun used by Rick Deckard in Blade Runner (probably to emphasize the realistic tone of this series, as opposed to a "future show with laser-guns"). It also notable that series star Edward James Olmos also played the mysterious police officer Gaff in Blade Runner. 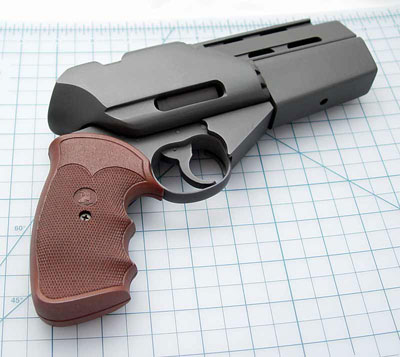 Colonial Handgun as used in the mini-series. This is a replica manufactured by Matsuo which incorrectly uses a Colt Python frame rather than the correct S&W one. 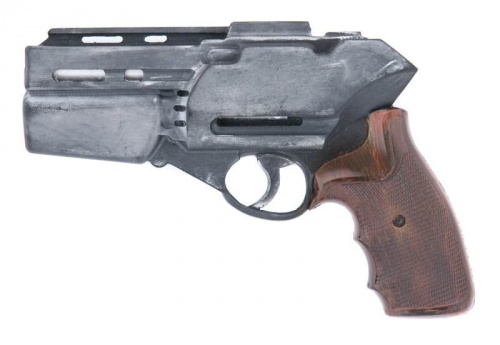 TV Series used Hard Rubber stunt casting of the firing Smith & Wesson 686 model. Screw holes were filled in and a sprue connects the trigger guard to the trigger for durability. 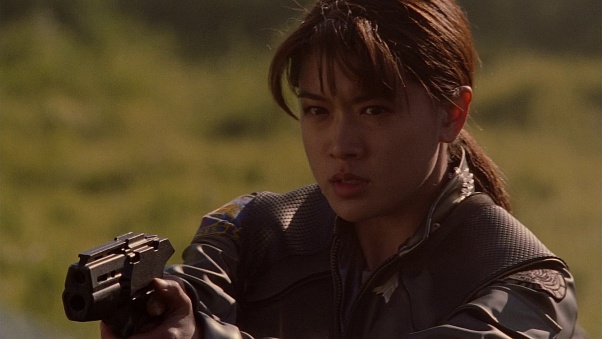 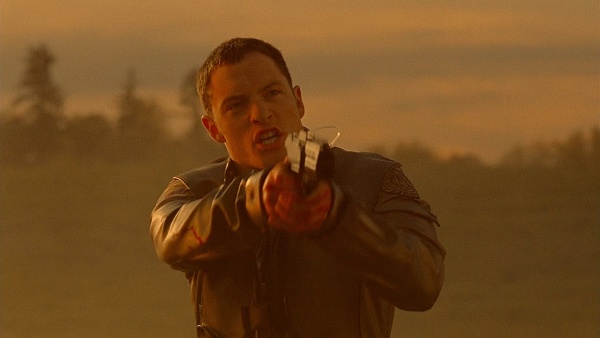 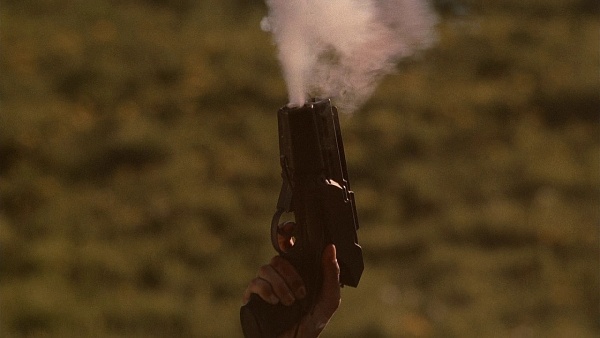 Closeup of the launcher used. 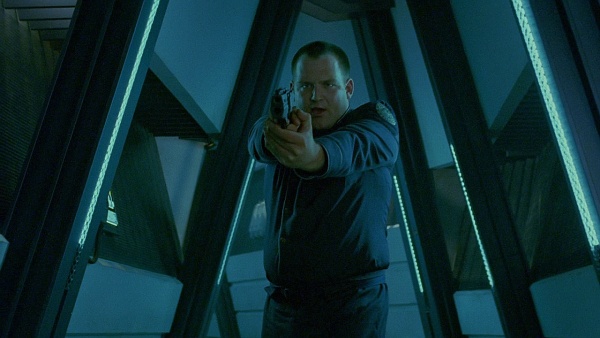 In the Miniseries, the Colonial security personnel on Galactica are armed with this bullpup assault rifle. It bears a resemblance to a short-barreled FAMAS with a Picatinny rail mount. This rifle was actually designed by Masamune Shirow for the Dominion manga series, and is known as the Seburo MN-23. No known working model of this gun has been seen, so odds are during the mini-series they were the airsoft props with added flashlights. Obviously since this weapon doesn't fire or technical crew changed their minds to the Cx4, this weapon along with the Raisen only appeared briefly during the mini-series. This rifle appears to be a standard weapon for the non-military security personnel onboard Galactica. 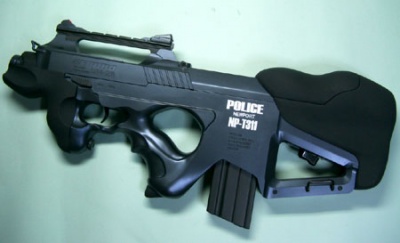 Airsoft replica of Seburo MN-23 seen in the Dominion manga series. This is a conversion kit for the Tokyo Marui FA-MAS airsoft gun by Dai-Nihon Giken Poseidon. 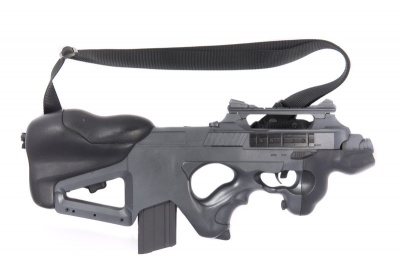 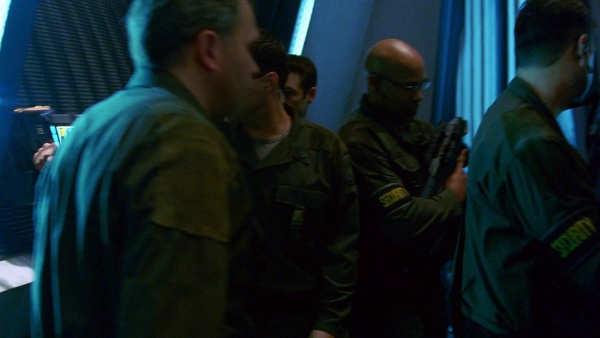 Galactica security team prepares to board the Ragnar Station armed with Seburo rifles. 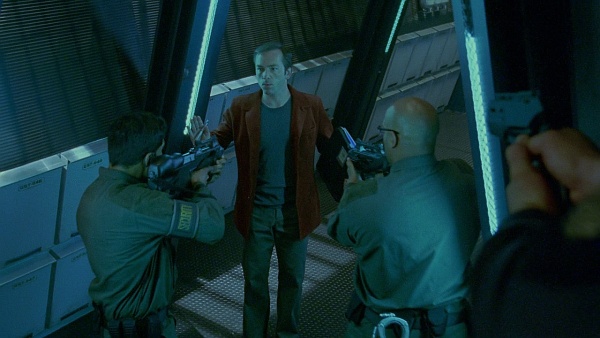 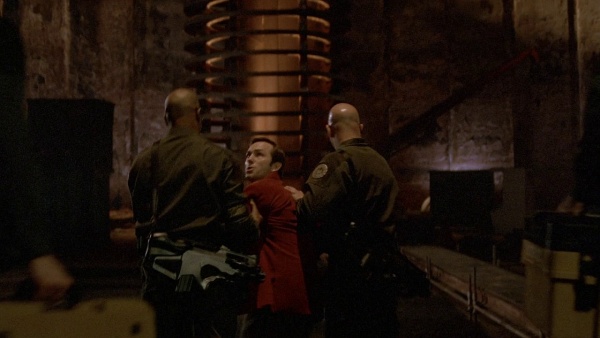 Aaron Doral being left behind on the Ragnar station by Galactica security armed with Seburo rifles.

The weapon possessed by Leoben Conoy (Callum Keith Rennie) at Ragnar Station is a fictional variant of the AR-15, known as the Close Quarters Battle Weapon Type Zero, aka the "Raisen". It is an airsoft conversion kit designed by Poseidon Industries of Japan, a company that also makes "defictionalized" Seburo airsoft guns like the Seburo MN-23 above. In the Mini-series, Leoben's Raisen had a flashlight, sling and sight attachment to it. It is most likely a non-firing prop since no known working model of the Raisen has even been seen to my knowledge. Obviously since this weapon doesn't fire or technical crew changed their minds to the Cx4, this weapon along with the MN-23 only appeared briefly during this scene on the Ragnar station during the mini-series. 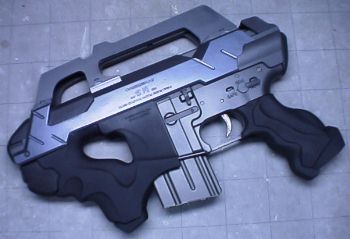 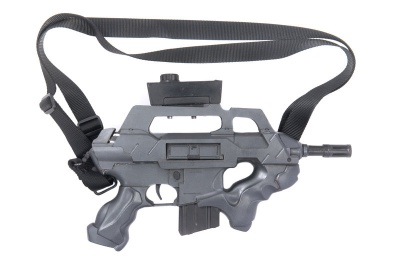 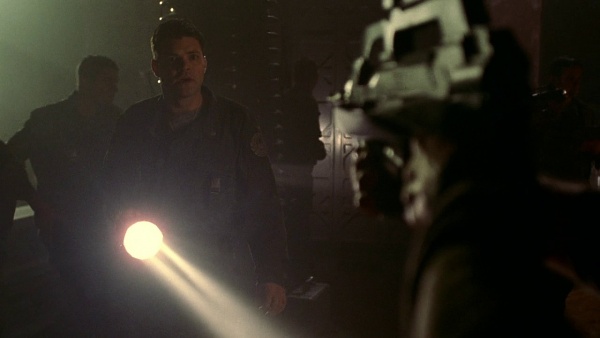 Tyrol is threatened with the "Raisen" rifle. 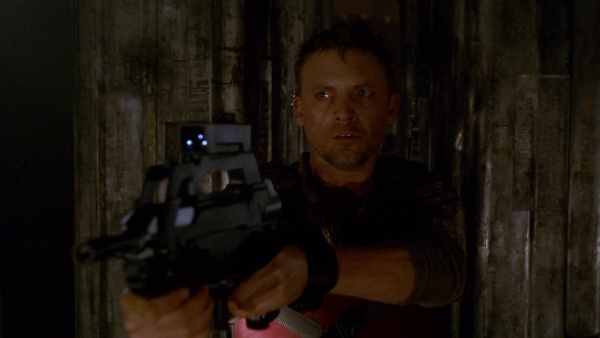 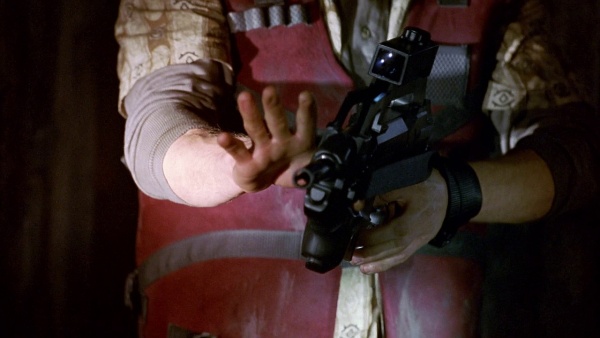 Closeup of the rifle.