I don't think the stock is removed, it is just folded to the side in the first picture. I don't know if there is a movie equivalent shot, but this promo images shows it more clearly: 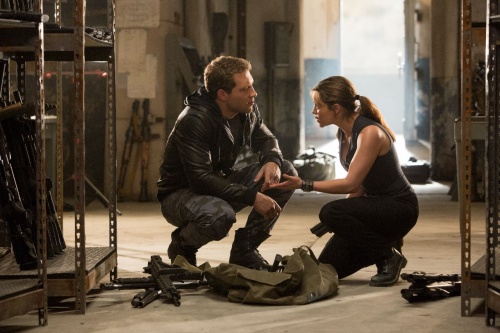 In the trailer there is what appears to be a cobbled together version of the time machine, so best guess is that they jump forward from the 80s to present day like in the Sarah Conner Chronicles. You also see that version of the Terminator with longer grey hair in the trailer, which is either from him in the present day (assuming that just Sarah and Kyle make the jump), or it is actually an old human that the template is based on but I am more inclined to think the former. I think therefore there are four different time periods: 60s where the Terminator rescues young SC, 80s from the original film, present(ish) day after the time jump, and the future. Speaking of the scene from the 60's where the Terminator is carrying the child SC, he is carrying what appears to be a Carl Gustav Recoilless Rifle. --commando552 (talk) 19:18, 5 December 2014 (EST)

Apparently the EARLIER time jumps completely changed the world as we knew it. This is an alternate timeline. Thus anything could have happened. Now that they changed history all the way from the 1960s, many weapons which were just design ideas at the time, could have been instituted earlier. Time travel and history 'changing' is probably the ONLY time anachronisms can still be explained and fit in to the story. ;) But then this is just conjecture on my part and should be regarded as such. MoviePropMaster2008 (talk) 17:24, 15 February 2015 (EST)

IMHO all this talk about anachronisms is no longer relevant, since the movie explains that the timeline was changed back when Sarah was a little girl. The entire timeline was changed in (1969) (not sure of the year or at least early 1970s) when more terminators were sent even EARLIER to kill her and her family. When this happened, ALL of human history was changed. Every one of those weapons advancements just happened earlier in their alternate time line :D MoviePropMaster2008 (talk) 17:16, 12 July 2015 (EDT)

Couldn't fit the justification in the edit box so will put it here: That launcher is not a Redeye but rather the later Stinger (or a convincing mock-up) for the following reasons:

From some promo images that have been release, it appears that the future weapons are actually modified real guns: 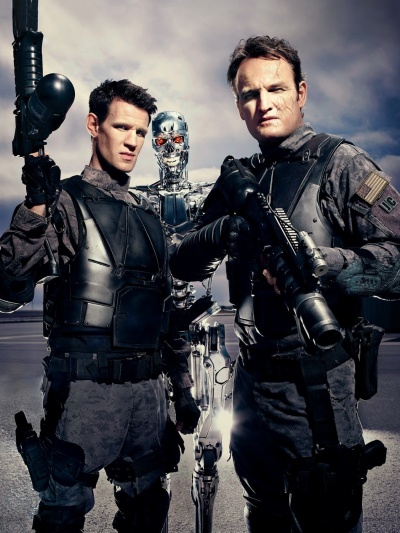 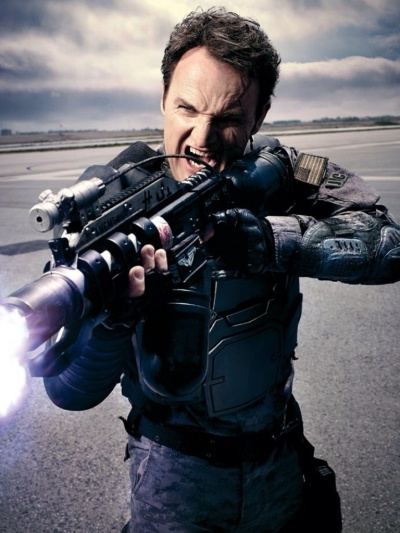 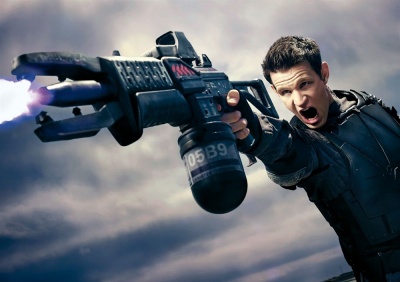 Both of them are AK type guns, Jason Clarke's appears to be an AKS-74U type (based on the mag well dimple and the top of the AKS-74U/AKMSU style front sight being visible, whilst Matt Smith's looks like a Galil MAR based on the distinctive rear sight. --commando552 (talk) 19:52, 5 December 2014 (EST)

Seen in the Movie

I just saw the movie and here are some of the weapons that I could make out.

Keltec KSG with a C-More Sight

Here's a couple of videos of people going to ISS to check out some of the weapons from the movie; there's shots of the plasma weapons that would make for good "Special" photos: [1], [2].

Here's the first video on Facebook since the article's gone for some reason: [3]

If you compare the two, both have the can-shaped thingy below the main tube, and a rectangular protrusion on the side. The Stinger has a box-like structure beneath the main tube. (Please excuse the super technical jargon.) --Funkychinaman (talk) 16:08, 12 November 2015 (EST)

I think it's two different guns. For one, the Remington 1100 is snapped over the terminator's face during their fight and the screenshots that follow are a different gun, possibly a Benelli M3. You can check IMDB for official screenshots.--Thomas (talk) 00:06, 7 December 2016 (EST)