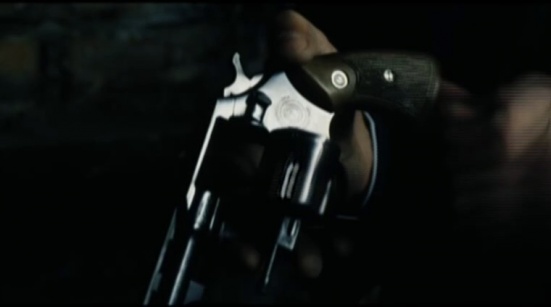 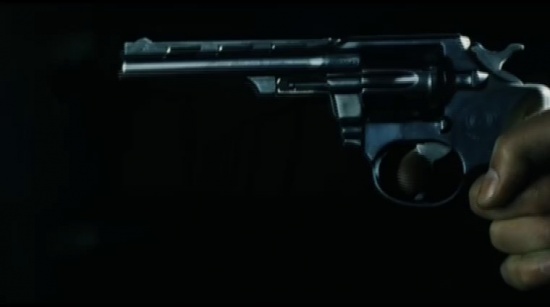 The revolver looks a lot like a Colt Trooper MK V, in that it has the Colt style cylinder release, ribbed and vented barrel, and a half length ejector shroud. However it has fixed sights, the spacing on the vented rib looks a bit off and the frame markings are wrong. I think it may be a blank fire replica or a copy of some sort, but can't find a match. Anyone have any ideas? --commando552 (talk) 18:18, 9 June 2013 (EDT)

That logo was what made me discount a Colt as to me it looks nothing like one. The normal Colt logo is a horse rearing up, and the Mk V Troopers have the same superimposed over a "V". The unidentified gun has a circular logo with a number of concentric rings or something, with no sign of the trademark Colt horse. It actually looks more like a S&W logo to me, but it definitely isn't one of them. --commando552 (talk) 20:06, 9 June 2013 (EDT)

From what I could find on the Internet, Heym revolvers never had circular logo beneath the cylinder latch. Logo on Wolf's revolver looks more like Czech ZKR-590 Grand revolver, however these guns never had ventilated rib. --Chris22lr (talk) 10:17, 10 August 2013 (EDT)

There's some pretty nasty interlacing on these screenshots, what were you using to take them? While it doesn't look perfect, I can fix the caps you have here in photoshop if you like, here's how it looks that way: 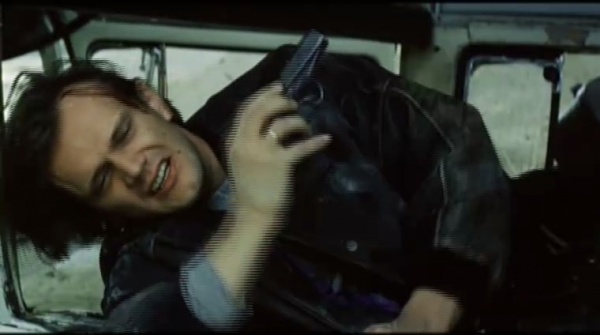 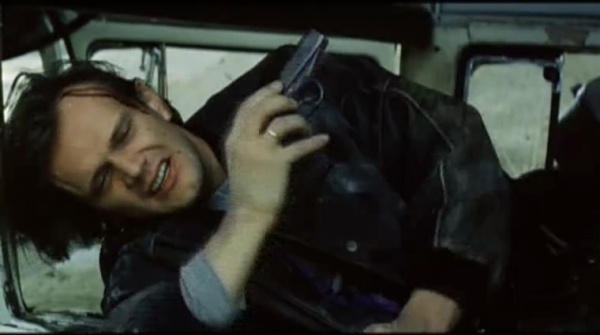 Linda fired in the film simultaneously from two guns. One is Beretta of unidentified type. And the second is?--Pandolfini (talk) 02:26, 10 June 2013 (EDT) 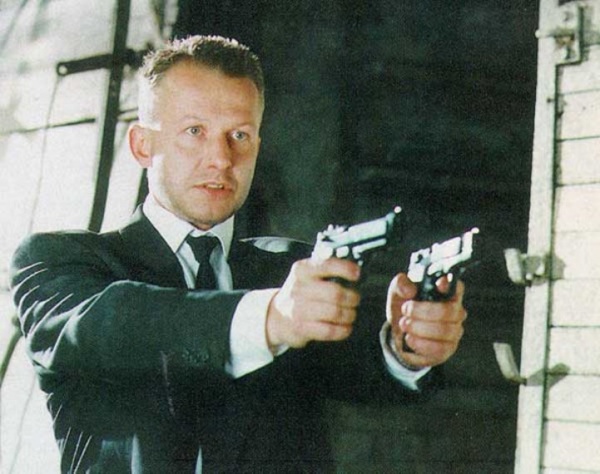 Agree about the trigger guard but think it is probably more specifically a Walther P88 Compact, as in the cap on the main page you can see that the frame goes all the way to the end of the slide. Also, in this cap you can see the slide safety/decocker. --commando552 (talk) 11:47, 10 June 2013 (EDT)

I don't think they made both at the same time, it isn't the typical compact/fullsize relationship. The P88 was too large so they made a product improved version which was smaller, and introduced a number of other features like a CZ-75 style safety/decocker in place of the slightly awkwardly placed combined slide release and decocker on the original. --commando552 (talk) 15:20, 10 June 2013 (EDT)

You're quite right. I checked one of my reference books about German handguns where it says "The P88 Compact appeared in 1992 and completely replaced the P88. It is generally of the same design, but smaller and lighter, and with a change in safety devices." I will adjust the P88 page somewhere later this week to reflect the two different versions, P88 and P88 Compact, PeeWee055 (talk) 14:51, 11 June 2013 (EDT)