Detective Sonny Crockett (Colin Farrell) can also be fleetingly seen in the extras DVD, carrying an ASP 2000 custom combat 9mm in an Fobus ankle holster. Colin Farrell is also seen placing the ASP in a Fobus paddle holster in a couple of training videos released online in early 2006. 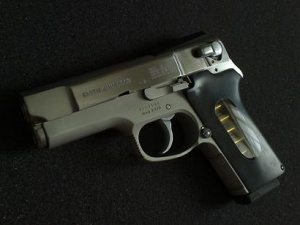 Steyr TMP (based on the fixed stock shape), one of the henchmen under the Micro Galil section has another stocked TMP, you can clearly see the foregrip.

Just looks like the exact same Rocky Mountain Arms Patriot used by one of Yero's henchmen.

I couldn't even tell you, it looks like a nickel-plated Bergmann MP-28 but it has what looks like a foregrip integrated into the wood stock.

The man on the left has what looks like a Mossberg 500 "Cruiser" but the pistol grip looks wierd. I can't tell what the guy on the right has but it looks parkerized with wood furniture, the stock is sawn-off to a pistol grip. I'm saying Remington 870. Czar

Why is a picture of the S&W Sigma listed under the S&W 99?

A S&W Sigma is not the S&W 99 and does not even appear in the movie.

The picture on the left is an OA93 while the picture on the right is someone who is most likely using a K23. The biggest noticeable difference is that the K23 has a buffer tube on the end, in the OA93, the charging handle and recoil buffer are both integrated into a flat top upper receiver eliminating the need for a buttstock or a buffer tube

It's not a K23; otherwise, it would have a regular triangular AR front sight, which it clearly doesn't in this movie. If you read our OA-93 page, MoviePropMaster explains that many of the OA-93s seen in Hollywood films have had buffer tubes installed by the armorers because it's necessary in order to make them function reliably with blanks. -MT2008 18:30, 3 December 2008 (UTC)

First of all, I don't like your tone. There is no need for such hostility, and furthermore, the evidence you cited originally to prove it's a K23 was vague enough that I felt compelled to point out something you might not have known. Second, every K23 I have seen - either the LEO full-auto carbine or the more recent civilian pistol versions - had a regular AR front sight post. The gun in this movie does not, so unless it was specially modified, I just don't see how it's a a K23. You are right that it does have a regular AR charging handle, which the OA-93 doesn't have. Third, looking closely, I realize I failed to notice that the receiver of the gun seems to have no forward assist or brass deflector - characteristic of both the OA-93 and K23. I now suspect it may be a Rocky Mountain Arms Patriot Pistol instead.

After watching the whole finale shoot out at least seven times in HD, and looking at as many pictures of the RMA patriot as i could. i am almost certain that it is a patriot that has been fitted with a collapsable stock, and a C - More red dot sight. what perplexed me was the raised rail on the upper reciever. i did not know too much about the patriot pistol. but if someone who knows more about the patriot wants to watch the shoot out, i think they will find that it is a patriot. and the the "ruger mini 14" does not look to be a shotgun, but a rifle based on the width of the mag.

Just to add come conjecture to this- I don't think what is listed as an OA-93 in the page is actually an OA-93. It has the raised top rail caracteristic of the OA-93, However is lacking the main element that makes an OA-93- the recoil spring mounted above the barrel. Also missing is the Charging handle unique to the OA-93, mounted above the receiver in-between the rail and receiver. As someone has mentioned above, I believe it is a Rocky mountain arms patriot pistol, fitted with a full stock tube and a carbine stock. And the c-more tactical sight ofc. I have some Hires screencaps from a Blu-ray of the movie and some pics of the Rocky patriot, if no-one minds me updating the article? Also, I belive that an OA-93 does actually appear in the movie, but in the hands of one of Tubbs and crockets team in the final shootout- the dude who gets shot in the leg while moving between cover.

The weapons in question are Rocky Mountain Arms Patriot Pistols. These are the same pistols that were used on 3000 Miles to Graceland as the same armory supplied weapons to both shows. -Phoenixent 16:27, 3 July 2009 (UTC)

Yeah, definitely. The 'high-rise' rail on the upper is the giveaway. Zito carries a (visually) unmodified OA-93 (only seen clearly in a few frames), so it seems odd that some guns would be modified for function (in this movie) but not others (perhaps they figured out how to run them).

Just sitting here watching Miami Vice being repeated on TV (ION) and got a little humour out of the fact that all of the automatic weapons being fired on both sides, and Tubbs (Jamie Foxx) is getting the best hit ratio with his Benelli M-4, one per customer except for Yero's Bodyguard who recieves three shots.

What went wrong with this movie?

One of the rumours I heard was that Jamie Foxx turned into an ego-maniac after winning the Oscar for best actor in Ray and made a load of demands, changing the script etc. Then he walked off the set whilst they were on location and flew back to America saying he was done shooting outside of the US, so a radical re-write was required. The final shootout was supposed to take place in South America somewhere. --cool-breeze 00:53, 29 November 2010 (UTC)

I thought the shoot out in the end was worth watching the whole movie. -Bravejoker

Can anyone put up some pics of Justin Theroux? Didn't he carry a SIG in one scene?- Bravejoker

Well, Zito's OA-93 needs to go back on the main page listed as such, as it IS an OA-93. The gas tube over the handguard is the dead giveaway, it also looks as though his weapon is fitted with a Bushnell HOLO Sight in addition to a carbine stock. Secondly, I think I may have finally solved the mystery of the two shotguns in the bottom image. I think they are both Mossberg shotguns. The one on the left may have an odd pistol grip, but the rest of the gun looks all Mossberg. The silver one on the right is a little bit more tricky. What gave it away for me is the safety, unique to the Mossberg, that appears to be visible on top rear of the receiver. There looks to be the telltale little black safety lever in the image. Also there's the fact that it looks to be a 20" barrel, and the mag tube runs all the way to the end of the barrel before the "ring" (for lack of a better term) secures the barrel to the mag tube. Now that in itself may not be indicative of a Mossberg, as the Winchester 1300 and Ithaca 37 have similar configurations. But that combined with what looks like the top mounted safety spells Mossberg to me. And finally, for me anyway, the chrome and wood rifle above the shotguns on this page is a bolt action rifle, not an assault rifle. Look at the back of the receiver, you can see the straight bolt handle protrude out from the gun. All three of these weapons look to be the personal weapons of their users. All three have features and accessories that are not standard, and I'm guessing they are real LEO's that agreed to be a part of the film. Those are my observations. GLOCK10mm (talk) 15:13, 20 July 2013 (EDT)