Hi, just browsing through and noticed this page for Bioshock is very lacking in a lot of weapons and info about them. Since I got some spare time right now, my Circadian rhythm is in complete disarray and can't sleep - I'm gonna try and write this page. I think the original author might have probably been very early in the game, or only seen trailers, so since I've almost completed the game - I think some of the info about the weapons I have might be more accurate. I'll be watching this section, so please feel free to discuss or raise any issues you have, and I'll try and get back as soon as possible. TC, Tec-9 08:33, 31 July 2009 (UTC)

I'm still on the process of re-writing this section - I did three weapons, and will hopefully do the rest soon. I didn't comment on each weapon's performance like on bioshock.wikia.com/wiki/Weapons because I'm not really sure if we're allowed to write that kind of walkthrough stuff on this wiki - so I tried just leaving it as commenting on the availability of the weapons and what each type of ammo is designed for ingame. If it is ok to comment on each weapon's ingame performance, anyone please feel free to add it in. Also if anyone wants to do the other weapons in a similar style - to keep the section consistent - please also feel free to do so, and discuss any issues, questions or comments here please. Thanks :) Tec-9 09:38, 31 July 2009 (UTC)

I seem to remember that there's 2 pistol variants, the standard one and a bigger one that you find in the cradle at the start. Is that one the same model of Webley?

But the player model in-game still looks just like a VI not a IV, but it uses .38 caliber rounds like the IV. You know that's not unusual in video games, I've seen a pistol that was obviously a single-stacked 1911 .45 use 9mm rounds from a 17 magazine! So lets say it's a Mk. VI chambered for .38 special.

I remember in some screenshots when Bioshock was first announced seeing a werid add-on for the Pistol. I WISH i could find the picture again but what I can remember is that it looked like a huge cylinder and it was screwed on to it.User:SeanWolf

http://xbox360media.ign.com/xbox360/image/article/705/705251/bioshock-20060505102000676.jpg Is this the add-on you mean? I can only assume it's the original appearance of the damage upgrade, as it clearly still has the increased capacity upgrade. Also note the bizzare weapons the Bouncer Big Daddy used to use.

Is the Shotgun Really a Remington 870

Actually, if anything it's really close to a Spencer 1882, but none of the guns in the game are very accurate renderings of real guns. - Nyles

Is the Grenade Launcher lever-action?

Judging from the picture of it, and the animation between shots, it appears lever-action. If this is not the case i can only think of it being double-action. Anyone can tell?--Z008MJ 05:42, 24 April 2012 (CDT)

I don't know, the trigger could be hidden behind the box. But what else are those movements when a new grenade is loaded: http://www.youtube.com/watch?v=s-XxNXltaCI It reminds me of handling a lever-action gun.--Z008MJ 05:40, 24 April 2012 (CDT)

If you look at the actual movement of the breech and how the gun twists, the breech actually opens to the side while a normal lever-action would open vertically. Judging from the movement of the sight compared to the electric ignition mechanism (the orange thing), it's almost like he's twisting the rear half of the gun to the left. Chitoryu12 06:59, 24 April 2012 (CDT)

I think you are right, it's not semi-auto, or loaded by bolt, pump, crank, or manual insertion. I never even thought of looking at the actual movement of the rear half. Should we assume BioShock apparently inventead a new firearm action? Is it theoretically possible to re-chamber a weapon like that?--Z008MJ 08:17, 24 April 2012 (CDT)

Well, you could have a geared bolt or lever action which rotated the action like that. But since he seems to replace everything aft of the chamber when reloading, it seems more likely that he's just twisting the back of the gun relative to the front to chamber new rounds. Given there seems to be nothing guiding the rounds into the chamber, the reason this hasn't been tried is because they'd probably just fall out the top of the hopper when you moved around. In fact since there's no stop and the hole at the top of the hopper is big enough for a whole grenade to fit though, I can't see why the follower doesn't just eject the contents of the magazine onto the floor. Evil Tim 08:25, 24 April 2012 (CDT)

Of course though, according to video game logic, if there is a chance in a million it will work perfectly, then it will work perfectly every single time (like with how in most video games guns never jam). But i assume you could just put them back in the magazine through the hole if they fell out. A dangerous design, as risking to drop a High Explosive Grenade/RPG on your feets every time you re-chamber isn't exactly safe.--Z008MJ 08:51, 24 April 2012 (CDT)

Now it seems to me that Thompson - it's actually M1A1; only altered under adoption drum magazines, and further established Cutts compensator and vertical grip. Like how it was done with the M1A1 in Fallout: New Vegas.

Now I myself confused. Rear - as of M1A1, with side handle; but it has rudement a channel for a vertical-grip shutter, which seems to be brewed! (?) Barrel - obviously from the M1927. To be honest, it's more like some kind of homemade machine gun, collected from different parts of the Thompson (since they are replaceable in return) and some Metal scrap? Slon95

Game designers sometimes create curious combinations of various firearms as they doesn't need to make live versions of their creation, unlike movie prop masters. So let's call this SMG a generic Tommy Gun rather than an exact copy of some real model. Greg-Z (talk) 09:33, 6 January 2015 (EST)

Well, it's already listed as just "Thompson Submachine Gun," the reference image is just to illustrate the version it's closest to visually. It's basically an M1A1 receiver with an M1921 / M1927 barrel and grip and the non-military model's ability to accept drum magazines. Evil Tim (talk) 09:43, 6 January 2015 (EST)

At the same time it is not clear why splicers use machine guns without butts and handles. Besides their machine guns very different from the machine gun of player. Slon95

Well, the fact that they're all insane does go some way to explaining that. But then it's more a question of how they've managed to keep them working if they don't care about breaking them. Evil Tim (talk) 14:25, 6 January 2015 (EST)

And I want to add more. Drum magazine in the Bioshock accommodates 40 rounds, so it's an explanation of what it is small (unlike real drum magazines for 50 rounds). Slon95 (talk) 26 January 2015 (EST)

Just for the lols 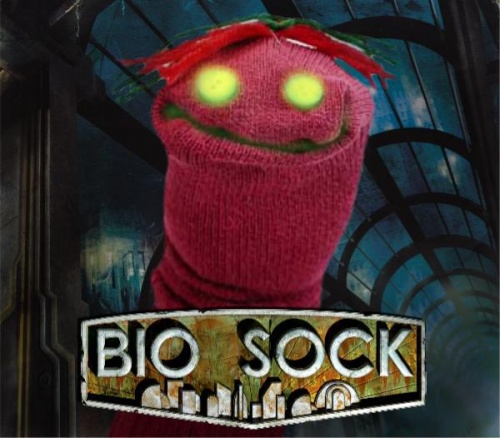 well it made me laugh, anyway
Retrieved from "https://www.imfdb.org/index.php?title=Talk:Bioshock&oldid=1275140"