ZB 39 Light Machine Gun, the last version of ZB-26 that incorporates some features of Bren. 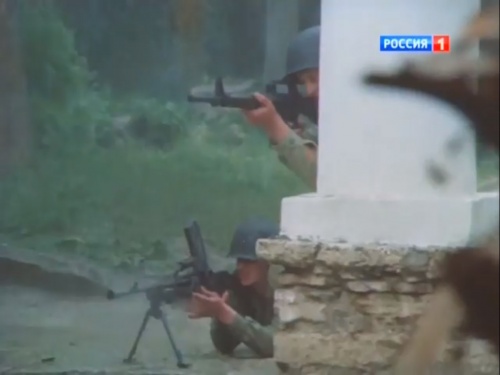 Thanks. There's actually a lot more other interesting weapons (in particular, what appears to be an H&K G3s, and one of versions of the Bazooka), but good screencaps impossible to do. --Slon95 (talk) 17:05, 1 March 2016 (EST)

Thanks to you for an interesting page. I slightly remember this movie from late 1980s, but of course I couldn't guess in that time that the original AR-10 appears there. I really wonder where this Armalite and all these rare (for Soviet movies) guns came from. At first I guessed that AR-10 is from Cuba, but then I found out that Cuban AR-10s were of Transitional model. And the origin of Hotchkiss SMG is even more mysterious. Greg-Z (talk) 09:26, 2 March 2016 (EST)

They could be from Angola, as the Eastern Bloc and Cuba backed the MPLA during the Angolan Civil War, so it would make sense that some British style weapons like the L1A1 and the Sterling would be there, courtesy of Rhodesia and South Africa. The Hotchkiss could be a left over from French colonial fighting or some weapon drop. The AR-10's are Sudanese models so they might be from the various Communist parties and takeovers in Sudan. --PaperCake 12:57, 2 March 2016 (EST)

While it's also possible to be a Guatemalan AR-10, there's not that much of a difference between Sudanese and Guatemalan models and given the other oddball NATO weaponry, I'll say it's a Sudanese model. The only weapon that's incredibly out there besides the Hotchkiss is the MP5K. It's not a copy or anything, it's a 100% authentic MP5K in a Soviet production. --PaperCake 22:53, 2 March 2016 (EST)