The following weapons appear in the video game Syphon Filter 2:

The M16A1 is a common sight in the game, used by a variety of US forces. Like in the previous game, its capable of both burst when the fire button is pressed, and full-auto when held down, despite the gun not capable of firing in bursts with a single trigger-pull.

This is a bit anachronistic since the game takes place during 1999, which by then US military personnel would be armed with M16A2s at this point.

The game rather bizarrely classifies the Heckler & Koch G11 as a sniper rifle rather than an assault rifle, despite the weapon still featuring fully-automatic fire. The weapon is modelled as a G11K2, but incorrectly uses a 50-round magazine: this was only used on the K1 and earlier models, with the K2 using a 45-rounder. The fixed-magnification optic mounted on the weapon is usable.

The weapon is frequently used by Agency spooks in higher levels.

What appears to be the AK-102, judging from the name and locale it is used, appears in the game. Strangely, the gun appears to be depicted in art with the barrel fully exposed, lacking a something resembling a handguard.

The weapon is used by Russian forces featured in the game, which is a strange choice since the AK-102 wasn't particularly wide-spread with Russian forces. The AK-74 or AKM would have been a more fitting choice.

As was the case in the first game, this is a fictional weapon which is apparently some kind of one-handed AK pistol without a handguard, but is still classified as a rifle. Also like Syphon Filter, its description repeats the media myth of the "teflon-coated bullet": while heavy AP rounds do have Teflon coatings to reduce barrel wear, the coating is mostly removed through contact with the weapon's rifling and has no effect on its penetration. Despite its armour-piercing performance in-game, it does not stop Gabe from recovering completely intact armour pickups. 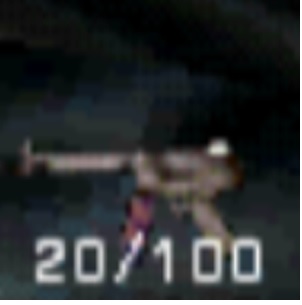 The "HK5" is now a Heckler & Koch MP5SD rather than an MP5K as it was in the first game. It is used by both the player and enemies, including Emergency Defense personnel sent into the Agency Bio-labs to stop Gabe from escaping, as well as Jason Chance, an undercover operative apparently working for the Chemical Biological and Defense Command (but in fact employed by the Agency), when he shoots Teresa Lipan before the last mission.

Despite being a full-sized submachine gun, the weapon is still fired one-handed. 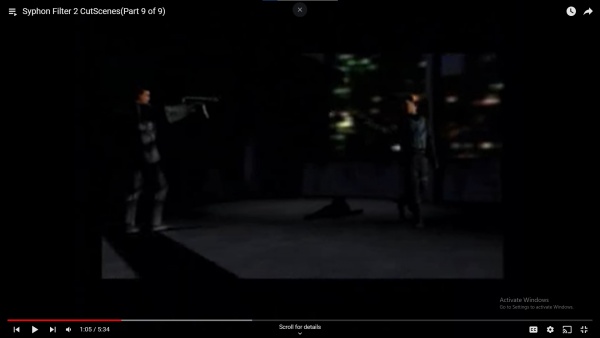 "I told them where she was and secured the test subject for transport. Just doing my job, Logan. That's all my job!"

The Izhmash PP-19 Bizon can be used in game. As was the case in the first instalment, it features an incorrect 66-round capacity.

Despite being a full-sized submachine gun, the weapon is still fired one-handed.

A single-shot weapon that is devastating up close.

For reasons which are not entirely clear, the weapon is treated as if it is belt-fed and is thus loaded with every round Gabe or Lian currently has.

The USAS-12CQ can be used; this marks the first time the Syphon Filter series contains the weapon. It would be used in all the next games. The weapon is notable for being required to defeat Jason Chance, the last boss, without accidentally destroying the helicopter. The scenario is that Chance is wearing a high-tech bulletproof armored suit that fully covers his body that renders him immune to all forms of gunfire, but the shotgun's sheer power still knocks him back a few feet per shot. So, you must now use the shotgun to push him back into one of the helicopter's rotor blades, which is the only way to kill him (never mind that even if someone were wearing a bulletproof armor that resistant; being shot by a gun with enough force to send a heavily armored human target flying would turn their innards into bloody puree with repeated hits).

Coincidentally, Chance himself wields the same firearm despite being armed with an MP5 in the cutscene immediately before this mission.

Despite clearly having a detachable magazine, the USAS-12 uses the same odd mechanics as the standard 12 gauge, and can apparently only hold 12 rounds in a 20-round drum.

A SIG SG 550 SR sniper rifle may be used in the game. Like in the previous game, it still uses an unrealistically high-tech sniper scope. Unlike the first game, enemies are now also armed with sniper rifles, and are particularly dangerous as they can instantly kill the player if they stand around in the snipers' view for too long with a headshot.

The SVD Dragunov is functionally almost exactly the same as the standard sniper rifle, but has a night vision scope. Due to technical limitations at the time, the scope functions less as an NVS and more of a thermal scope with a green tint, since enemies are brightly highlighted when viewed through the scope.

Note there is no such thing as an "SVDN2" night vision scope: this name is applied to rifles which are modified to use the NSPUM (1PN58) night vision scope. The model is shown with a standard PSO-1 scope, and also lacks the suppressor it is claimed to have in the description.

The M1911 returns from the previous game, still retaining it's high damage stat. It is held by a variety of enemies throughout the game, most strangely Russian mobsters and prison guards.

Apparently in this universe the year 1911 came after the year 1914. Note also the incorrect assertion that the classic M1911 design is double-action.

The Glock 17 continues to appear in game in the hands of the player and enemies, although no longer strictly a starter weapon. This is also the first time the game the gun is used by the player without a silencer.

The Glock 18 also appears in the second game, albeit more frequently as the "G18". The gun is one of the preferred weapons of Agency spooks and is a commonly-found weapon in levels featuring them as enemies.

Note the bizarre assertion that firing at 1,200 RPM makes this this most lethal "machine pistol" ever made. Since, in this game, this category includes full-size SMGs, this is severely incorrect: the first magazine-fed Thompson Submachine Gun prototype, "Annihilator I," fired more powerful .45 ACP rounds at 1,500 RPM, and this is not even getting into whether lethality is best defined by fire rate.

A DefTech 37mm launcher firing CS gas grenades can be used. Oddly, the maximum number of rounds that can be carried is 5, meaning Gabe (or Lian) cannot even fully load the 6-round cylinder.

The weapon is used by Russian police forces as is needed to take them down non-lethally, an odd choice since the RG-6 would have been a more fitting choice.

The weapon called the "M79" in-game is actually a Tru Flite 37mm Super Long Range Gas Gun incorrectly shown as able to launch high-explosive grenades. The weapon is now a bit more wide-spread as more enemies are brandishing it now, which is bad news for you due to the gun's absurdly wide insta-kill explosion radius.

C4 charges can be found in the game. Some missions require the player to diffuse the explosives while others provide players with the device.

Note the incorrect statement that C4 uses a friction igniter: C4 cannot be detonated by a spark from such a system, being so highly insensitive that it can be set on fire without exploding, and requires an electrical detonator.

A grenade containing Soman nerve gas (a chemical similar to but more toxic than Sarin, also known as GD) can be found in stealth missions. It appears to essentially be a truncated M7 CS gas grenade. It is integral to taking enemies down without sounding the alarm.

In a nod to the fight with Anton Girdeaux in the first game, Gabe is able to procure a flamethrower during the search for the data discs. 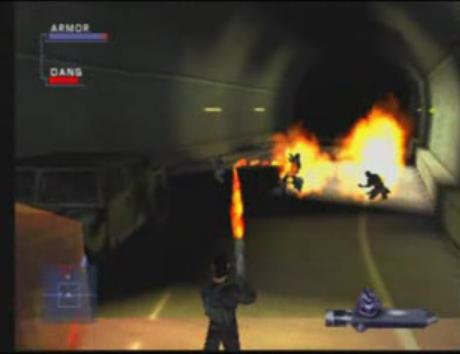 A hand-crossbow appears in the starter inventory during some stealth-only mission. The weapon is classified as non-lethal as it's bolts are apparently coated in a special drug that puts people to sleep and will instantly do so with a direct hit on an enemy. Like the pump-action shotgun, the crossbow draws from a bottomless magazine (even if it can only hold 1 bolt at a time), and will continue to shoot so long as there is rounds left in the ammo pool without the need to reload. Although, since the weapon is never held by enemies, there is now way to replenish the ammo pool, making marksmanship very crucial.

For obvious reasons, shooting enemies in the head will result in a fatality.

A general-purpose, non-descript taser is a starting weapon in every mission. The signature weapon of the series, it was possible to set enemies alight if sustained stunning was used. This convention carried over to most games in the franchise, but it was not possible to cause targets to be set aflame in certain circumstances. In the PS2 and Vita versions of Syphon Filter: Dark Mirror, you can't burn enemies with the Taser but in the PSP version, you can. In Syphon Filter: Logan's Shadow, you can't burn enemies with it.

This is a variant of the series' signature taser which can only be used in close quarters. It is impossible to set enemies aflame with this particular device, but a single hit from this is capable of instantly incapacitating an enemy, unlike the ranged taser which takes a few seconds.

A double-edge combat knife is usable in most missions: the first time a Syphon Filter game contained a combat knife. The knife is unique that it bypasses armor and will result in an instant-kill if the player can land a successful attack on an enemy, although as you need to be right beside an enemy to perform this; its a high risk-and-reward weapon. It also has a unique throat-slit animation if an unsuspecting target is attacked with the knife from behind. The developers seem to have confused it with the K-BAR.

The weapon is particularly infamous in multiplayer games, as it normally results in some less gun-inclined players to simply run around the map and chase their target with a knife like a deranged serial killer. Due to armor being higher in MP and the knife being able to bypass armor; running around slashing wildly at enemies became an unconventional but effective strategy.