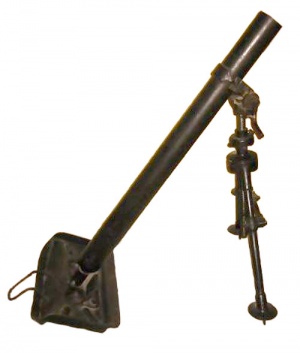 The Stokes Trench Mortar was developed by an Englishman, Sir Wilfred Scott-Stokes who was the managing director of Ransome & Rapier of Ipswich, England a mechanical engineering firm. Although Stokes did not have a military background, he quickly grasped the need for a "portable gun" who could keep up with the German Minenwerfer soon after war started in Europe. Stokes correctly reasoned that such a weapon would be valuable for reducing the deadly machine gun nests that were beginning to wreak much havoc on the Western Front. Stokes had a working prototype of his trench mortar ready for testing in December of 1914, barely four months after the war started.

The Stokes Trench Mortar and variants can be seen in the following films, television series, video games, and anime used by the following actors: