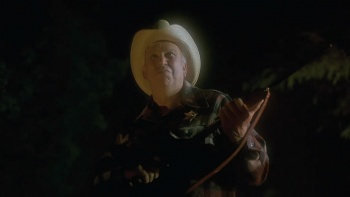 Slim Pickens (born Louis Burton Lindley Jr.) was a former rodeo rider and rodeo clown turned actor. He specialized in playing cowboys in comedic roles, although his breakout performance was that of bomb-riding USAF pilot Major "King" Kong in Stanley Kubrick's Dr. Strangelove or: How I Learned to Stop Worrying and Love the Bomb. He was inducted into both the Western Performers Hall of Fame and Pro Rodeo Cowboy Hall of Fame.