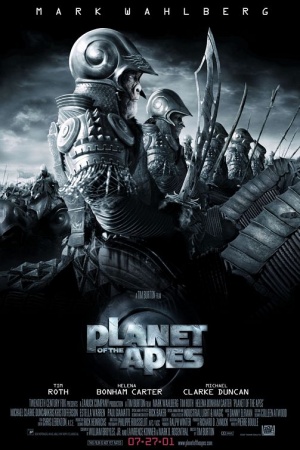 Planet of the Apes is the 2001 "reimagining" of the classic 1968 science fiction film of the same name. The film was directed by Tim Burton and Mark Wahlberg stars in the film as an astronaut that follows one of his chimps into a wormhole and finds himself on a planet where intelligent apes rule over subservient humans. The film, while a financial success, received mixed reviews and interest waned on continuing the storyline with a sequel. The series would not return to the big screen until 2011's Rise of the Planet of the Apes.

The following weapons were used in the film Planet of the Apes (2001):

Both of the spaceships that land on the planet have a pack that has supplies and a Goncz GA that has been modified to look futuristic. It is used by Capt. Leo Davidson (Mark Wahlberg) when they escape from the apes until it is destroyed by Krull (Cary-Hiroyuki Tagawa) and Gen. Thade (Tim Roth) uses the second one when he is trapped in the ship. 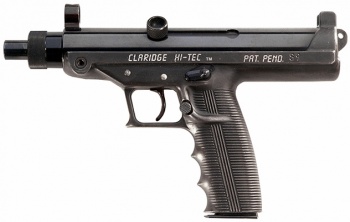 The pistol is found in a broken vase.

Thade (Tim Roth) with one of the pistols on the ship.

The Apes Police draws Beretta 92FS Pistols at Leo Davidson (Mark Wahlberg) when he crash lands in what appears to be an alternate version of Washington D.C.

Ape officers with their Berettas drawn

In a continuity error, the Gonza held by Gen. Thade (Tim Roth) becomes what appears to be the Non Gun version of the Beretta 92FS Inox. 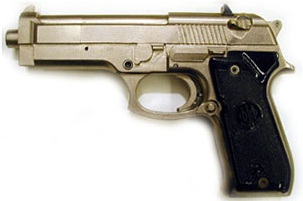