Piraty XX veka (Pirates of the XXth Century) is a 1979 Soviet film directed by Boris Durov about modern piracy. A Soviet cargo ship carrying a load of medicinal opium is attacked by a group of vicious pirates, who sink the ship and leave its crew for dead. The surviving crew members decide to take revenge by attacking the pirates, who have hidden their ship at a small Pacific island. This film was the highest grossing Soviet movie of 1980.

The following weapons were used in the film Pirates of the XXth Century (Piraty XX veka):

Colt M1911A1 pistols are carried by some pirates who seize control of the Soviet cargo ship, including their captain (Rein Aren) and his second-in-command Salekh (Talgat Nigmatulin). Chief engineer Sergey Sergeevich (Nikolai Yeryomenko, Jr.) uses Salekh's M1911A1 when he attacks the pirate ship in the finale scene.

During the night attack on pirates' ship doctor (Pavel Remezov) fires the captured M1911. Note that the pistol jams and the slide stops, not reaching the place.

Sergey Sergeevich holds Salekh at gunpoint with his own pistol.

Sergey Sergeevich prepares to attack the remaining pirates with his M1911A1.

Sergey Sergeevich with his M1911A1 on board of the crashed pirate ship in the final scene.

The Luger P08 was taken by Soviet sailors from a captured pirate. It is carried by Captain Ivan Ilyich (Pyotr Velyaminov) during the attack on the pirate ship.

A pirate at the left (Vladimir Episkoposyan) carries the P08 in holster.

A pirate at the right (Yahyo Fayzullayev) carries P08, tucked at his belt.

The chrome plated Walther P38 is used by Captain Ivan Ilyich (Pyotr Velyaminov) after the pirate ship is seized. 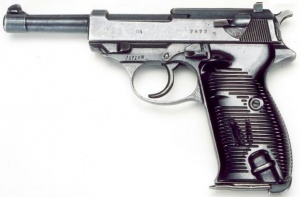 The captain examines the pirates' earnings while holding his P38. A M1928 Thompson submachine gun lies on the table.

Sten Mk II submachine guns are carried by the Indian police officers who escort the cargo of opium during the introduction of the movie, and later by many of the pirates who board the ship to steal its cargo, notably by the chief of the boarding team Schweigert (Igor Klass).

Police officers armed with Sten Mk IIs watch as the cargo of opium is loaded aboard the Soviet ship.

A pirate (stunt performer Bimbolat Kumbolatov) kicks Captain Ivan Ilyich in the chest as he boards the cargo ship.

The same pirate with Sten during the brawl on the desk.

Another pirate (Gennadi Chetverikov) fires his Sten at the crew.

Salekh with Thompson M1928A1 and Schweigert with Sten watch the burning Soviet ship.

A Sten-wielding pirate is shot when the Soviet sailors board the pirates ship.

Soviet boatswain (Tadeush Kasyanov) measures the depth of the water on board the pirate ship with a captured Sten Mk II next to him.

Several of the pirates, including Salekh (Talgat Nigmatulin), are armed with M1928A1 Thompson submachine guns when they capture the Soviet ship. The weapons appear in various configurations, with different handguards and some lacking buttstocks.

A close view of the muzzle of a Thompson.

Klyuev (Georgiy Martirosyan) with Thompson is shot during the shootout on the pirates ship.

Sergey Sergeevich fires a captured Thompson at the pirates.

A pirate at the left (Laktemir Dztitiev) holds the Thompson.

Sergey Sergeevich reloads his Thompson. Note the odd magazine: this weapon has been adapted for 7.62mm blanks in MP40 magazine.

A modified StG 44 hangs to the left of the pirates, while a M1928 Thompson hangs on the right.

A pirate holding his Thompson with one hand. The non-standard magazine is seen clearly.

Not used directly in action, but the MAT-49 is seen in the hands of one mercenary on pirates' photo. 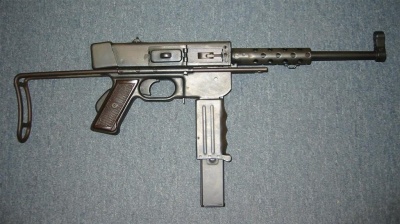 A mercenary on the background holds MAT-49. The shot is taken from documentary footage of some conflict in Africa.

One of the most common weapons used by both the pirates and later the Soviet crew members are Sturmgewehr 44 rifles, modified to resemble the AR-15 rifle. This is one of the first appearances of these rifles; for unknown reasons, they do not display the production M16s, but the early AR-15s, including a workable upper cocking handle ([1]).

A pirate (Vladimir Episkoposyan) fires a StG 44 during the hijacking of the cargo ship.

A pirate (Nartai Begalin) searching for a missing comrade with a StG 44.

During the shootout on the pirates ship Sergey Sergeevich's Thompson switches to StG 44 due to a continuity error.

Doctor (Pavel Remezov) fires at the floating naval mine.

A modified StG 44 is seen near Sergey Sergeevich.

A modified StG 44 hangs to the left of the pirates, while a M1928 Thompson hangs on the right.

A mercenary on one of the photos holds AKM with bakelite magazine.

Maadi ARM (Egyptian clone of AKM) - 7.62x39mm. The original AKM similar, but this photo shows the rifle with a bakelite plastic magazine.

The shot is taken from documentary footage of some conflict in Africa.

The FN FAL rifle seen on the same photo in the hands of one of the mercenaries.

The FN FAL is seen on the left. The shot is taken from documentary footage of some conflict in Africa.

Three of the pirates are armed with PK Machine Guns that have been visually modified with the addition of a different barrel and buttstock to resemble MG34 machine guns. These are used to gun down several crew members when the pirates attack the cargo ship. 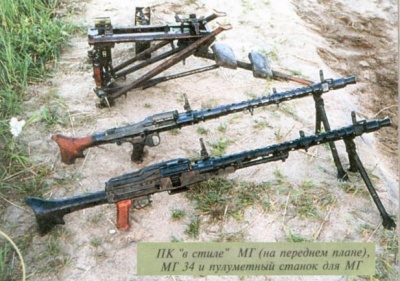 Another pirate fires the "MG34" from the hip.

A real MG34 machinegun is seen on the one photo.

The MG34 stands on the ground. The shot is taken from documentary footage of some conflict in Africa.

The FN MAG can be seen on one of the pirates' photos.

The shot is taken from documentary footage of some conflict in Africa.

Two SPSh Flare Pistols are used by the Soviet sailors when they attack the pirate ship. The weapon is fired at close quarters to subdue some of the pirates, allowing the sailors to capture their weapons.

Yura Mikosha (Viktor Gordeev) holds the SPSh at the left when the Soviet crewmembers prepare to board the pirates ship.

Pirates use naval mines to block the entrance of the bay. Accodring to the movie prop master, the mines are wooden mockups, based on old Russian M1908 or M1912 patterns.