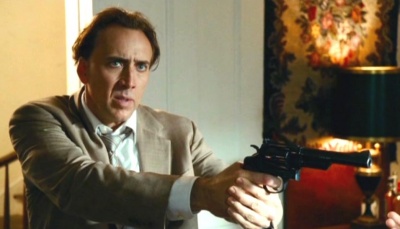 Nicolas Cage as Terence McDonagh is armed with a Smith & Wesson Model 29 in The Bad Lieutenant: Port of Call - New Orleans (2009).

Nicolas Cage is an American actor who is well known for his roles in such action films as The Rock, Face/Off, Gone in 60 Seconds and Con Air. He also has appeared in several dramatic films including World Trade Center and Leaving Las Vegas, a film role for which he received the Academy Award for Best Actor. Born Nicolas Coppola, Cage is the nephew of director Francis Ford Coppola and actress Talia Shire.