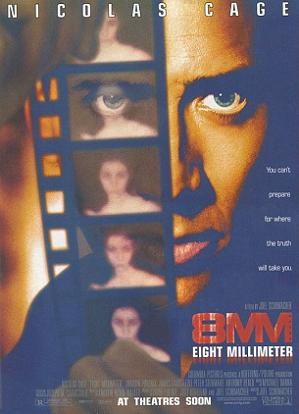 The following weapons were used in the film 8MM:

Tom Welles (Nicolas Cage) can be seen using a stainless steel SIG-Sauer P230 with threaded barrel as his weapon of choice, most notably when he confronts Eddie Poole (James Gandolfini), pistol-whipping him and threatening to shoot him, though is unable to bring himself to carry out the act. He uses it with an attached suppressor in one scene. 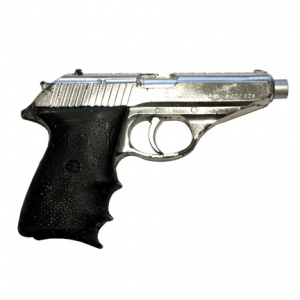 Prop SIG-Sauer used in the film 8MM, being sold by the Golden Closet

Welles takes the SIG out when Dino Velvet holds a crossbow on him.

Welles points the SIG at Eddie and Machine.

Welles holds the SIG on Eddie after ambushing him at his home.

Eddie, with the SIG held against his forehead, taunts Welles.

The bloodied SIG after Welles uses it to beat Eddie to death.

Eddie Poole uses a SIG-Sauer P226 at the meeting. This is the gun he tosses and fires at Tom. 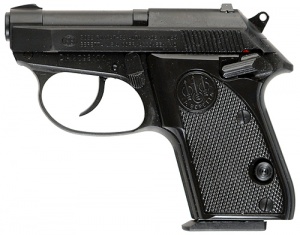 Another view of the Tomcat.

A pornographer early in the film carries a stainless or nickel Colt M1911 in a shoulder holster.