The Road Warrior (aka Mad Max 2 and Mad Max 2: The Road Warrior) is the 1981 sequel to Mad Max. The movie's initial US release did not announce it as a sequel, since the original film did not get a lot of exposure in the US market. The sequel had the advantage of a much higher budget and a deal with a major American distributor, ensuring that it would appear in many more theaters across the country. The film largely defined the "post-apocalyptic" genre and has influenced many subsequent works, such as the Fallout series of video games. The Road Warrior was a financial success and paved the way for the third film in the series, Mad Max Beyond Thunderdome, released in 1985, while a fourth film, Mad Max: Fury Road, was released in 2015 with Tom Hardy taking over the role of Max.

This article uses the original US release title; following the franchise's success, it was re-linked to the original movie, and modern editions are titled Mad Max 2 or Mad Max 2: The Road Warrior.

The following weapons were used in the film The Road Warrior, aka Mad Max 2:

"Mad" Max Rockatansky (Mel Gibson) uses a sawn-off double-barrel shotgun from his MFP days throughout the film. This shotgun differs from the sawn-off VG Bentley shotgun in Mad Max in that the foregrip is more triangular and the trigger guard is a different shape. 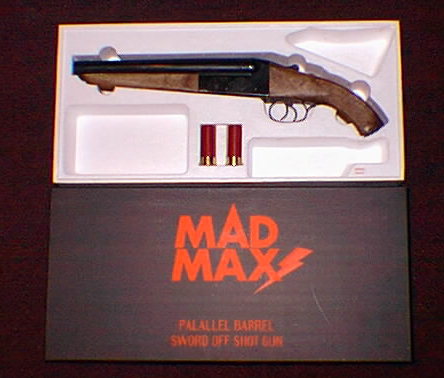 Airsoft version of the Road Warrior shotgun made by Hudson Industry Co. of Tokyo, modeled after the original prop. There are two versions of this replica, one with a real wood stock and the other with a cheaper plastic stock.

Max readies his shotgun after a short high speed chase. The shotgun is a bluff, as Max is out of shells at the time.

Max's shotgun, ready to be fired by a rather unusual operator.

After finding what he thinks is one good shell, Max fires it at Humungus, only to have it backfire in his face.

Max draws his shotgun and drills the driver of a pursuing car through the windshield.

Max fires his shotgun at one of the men on the roof of the semi.

Max swapping out the spent shells.

A Smith & Wesson Model 29 fitted with an optical scope is the personal weapon of Lord Humungus (Kjell Nilsson). He very rarely uses it, since the ammunition is rare and precious in the post-apocalyptic world of Mad Max.

As Max is approaching the compound in a semi truck, Lord Humungus draws his S&W Model 29 and loads one round.

Humungus fires a round into the semi's radiator.

Humungus loads up all his remaining rounds before the final chase with Max.

Humungus fires two shots at the semi, only to find the front end is now reinforced.

The survivors also have a makeshift flamethrower guarding their compound. Max also is seen using the flamethrower.