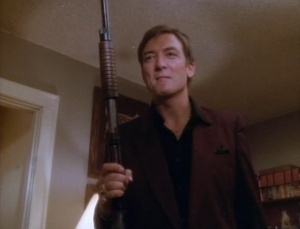 James Keach with a Smith & Wesson 3000 Shotgun as Sgt. Moran in The Cops are Robbers.

James Keach is a veteran actor/director/producer who has appeared in such films as The Long Riders and National Lampoon's Vacation in addition to numerous guest roles in various television series throughout his three decade career. He also has directed feature films and television episodes. He also has produced several feature films, including the Johnny Cash biographical film Walk the Line. He also is the brother of actor Stacy Keach and was once married to actress Jane Seymour.