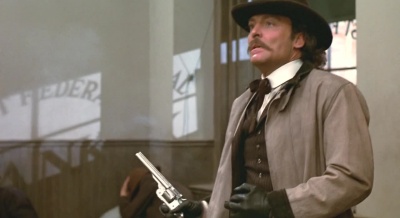 Stacy Keach as Frank James holds a S&W Schofield in The Long Riders.

Stacy Keach is a veteran American actor whose long acting career includes roles in such films as The Long Riders and Class of 1999. He also portrayed the literary private eye Mike Hammer in a television film and subsequent series. He also is the older brother of James Keach, with whom he co-starred in The Long Riders .