Hussar Ballad (Gusarskaya ballada) is a Soviet 1962 adventure comedy directed by Eldar Ryazanov. The story takes place in 1812, during Napoleon's invasion of Russia. Shura Azarova, a young girl from a noble family, dresses herself as a Hussar officer and joins the Russian Army to fight against the invaders.

The following weapons were used in the film Hussar Ballad (Gusarskaya ballada): 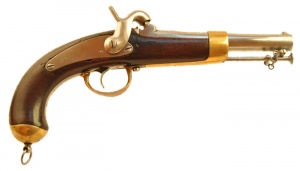 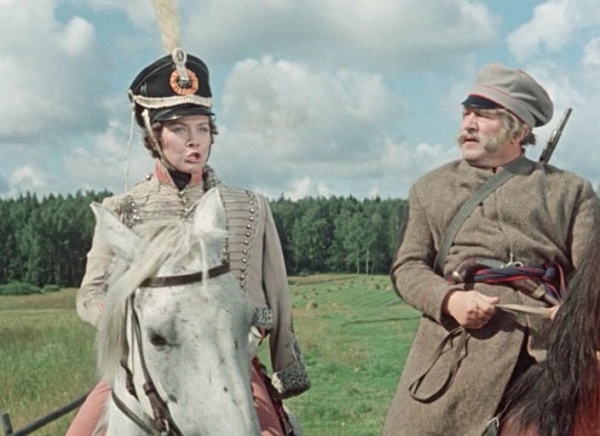 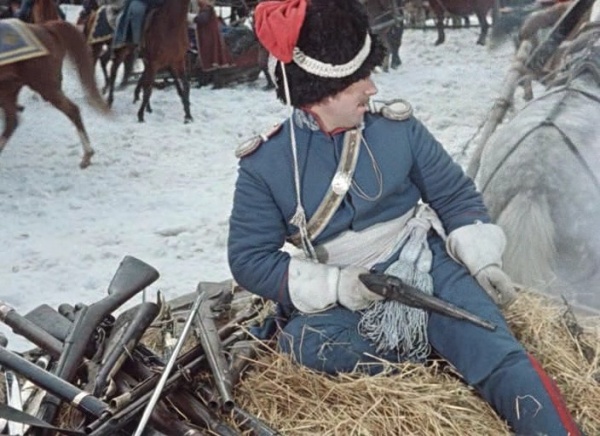 A Cossack officer (Yuri Belov) holds a percussion cap pistol during the skirmish. 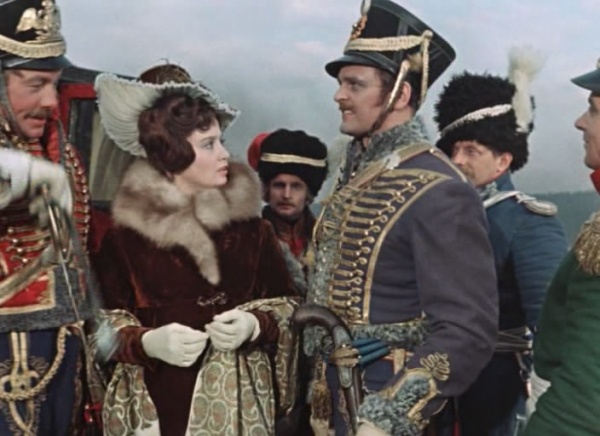 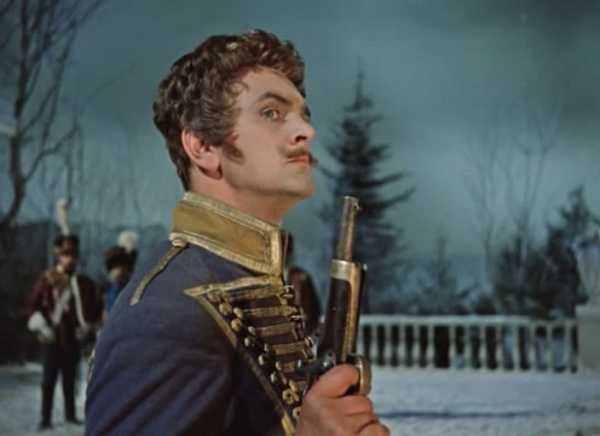 Rzhevsky readies to the duel. 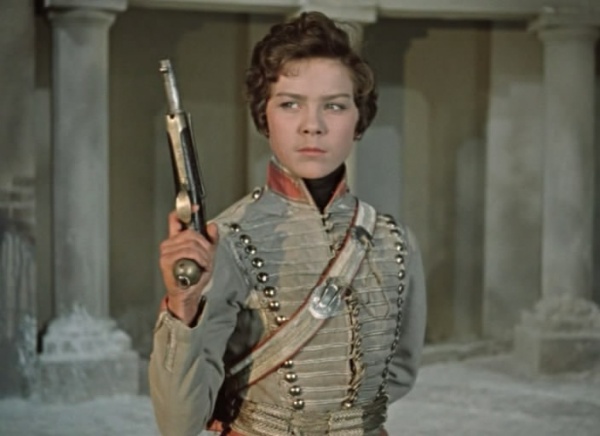 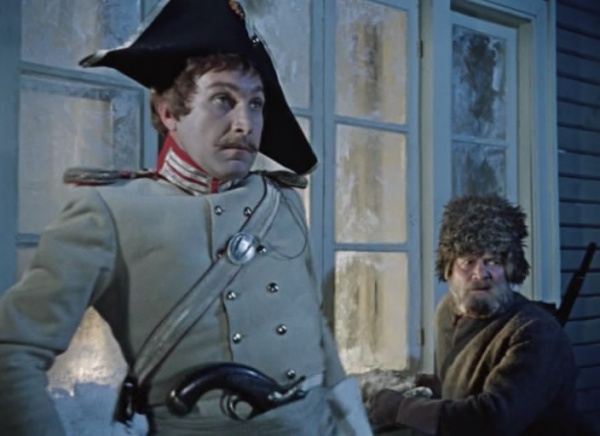 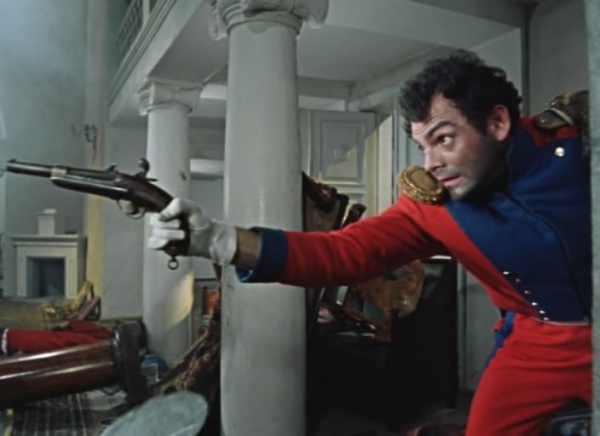 Flintlock Pistols are also seen though much less often. 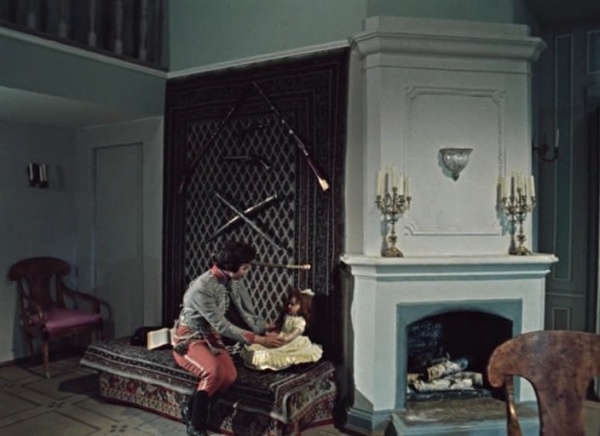 Two flintlock pistols are seen on the wall in Azarov's house together with other weapons. 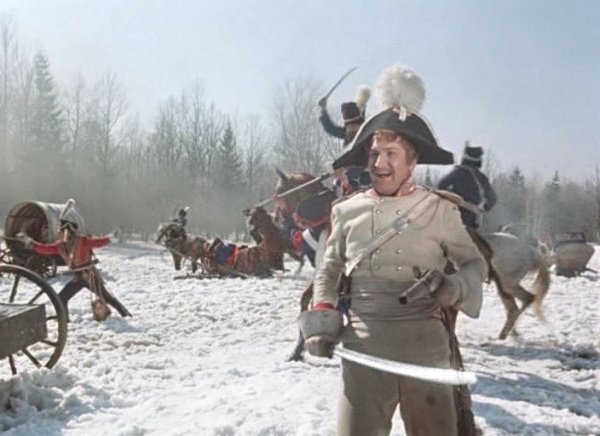 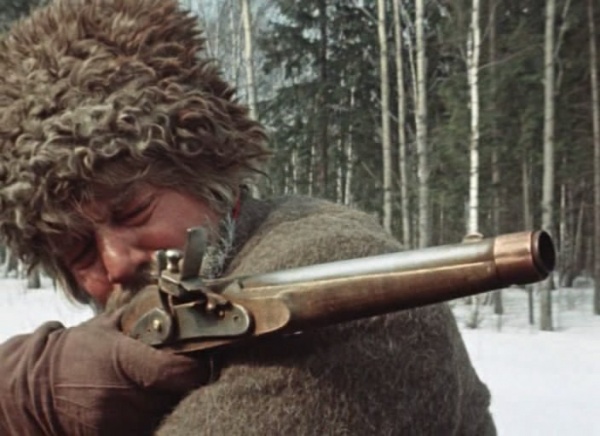 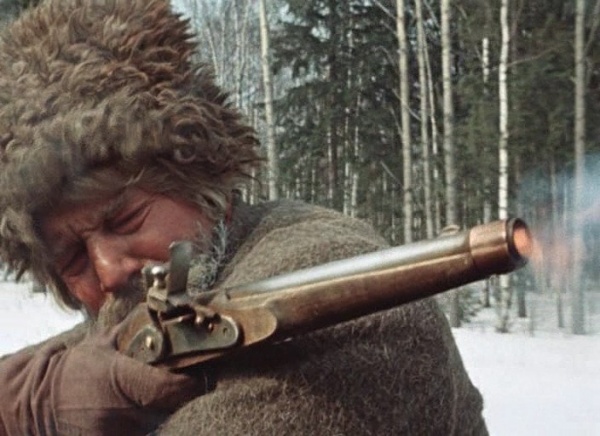 When Ivan fires, the flintlock doesn't move and the flame and smoke are produced by pyrotechnical charge in the muzzle. 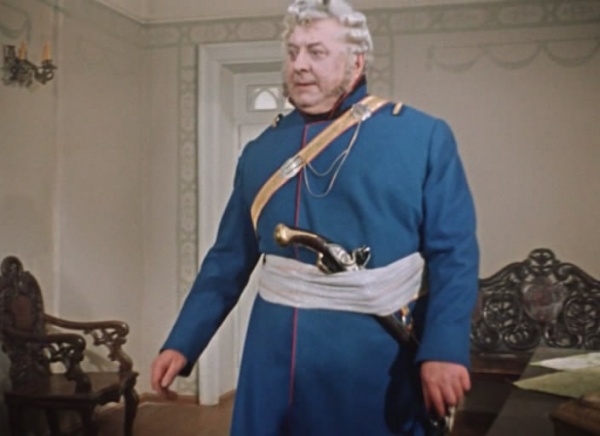 Russian and French soldiers are armed with fake flintlock muskets that appear to be Berdan No.2 rifles with removed bolt handles and sights. Some of these guns are fitted with fake flint locks, this props are seen close, while the guns at the background are less detailed. 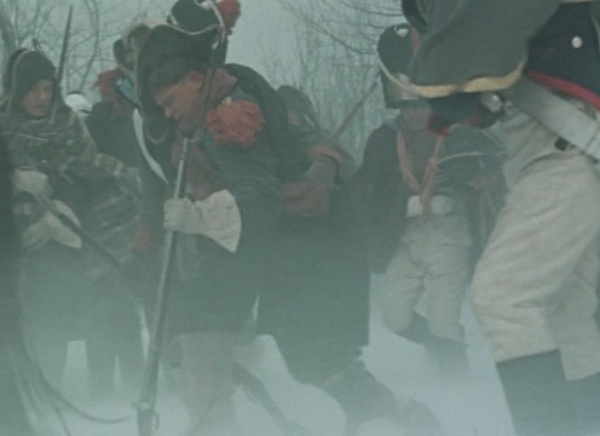 A French soldier carries a "musket" during the retreat of the Grande Armée through the Russian winter. 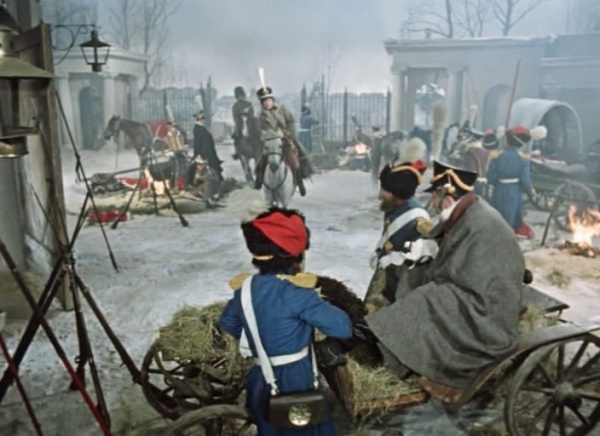 Several "muskets" are seen at the left. 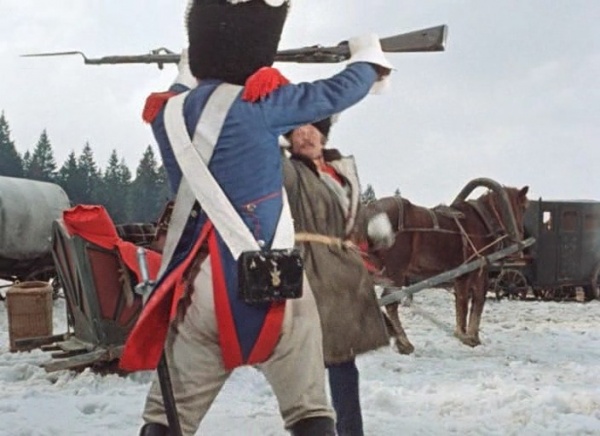 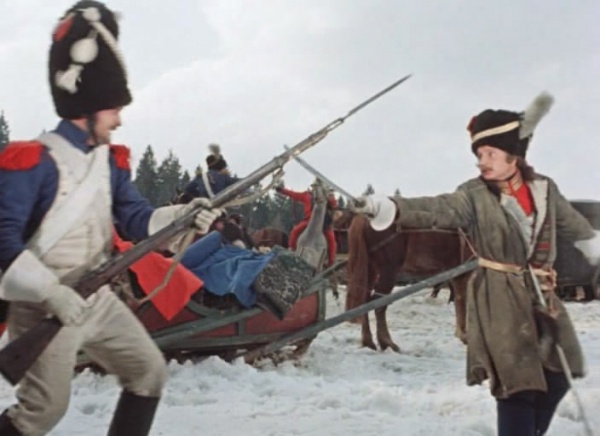 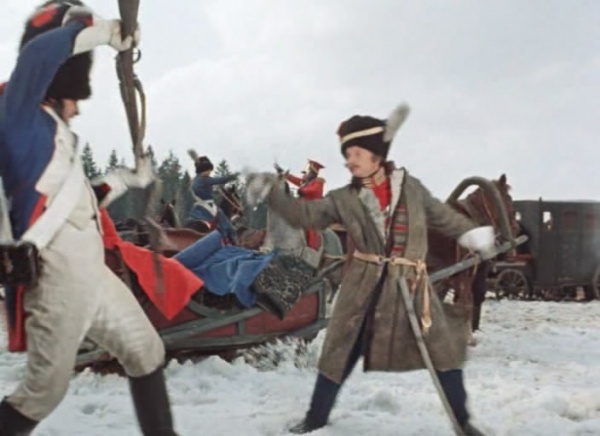 A French soldier with a "musket", fitted with a prop bayonet, fights against the Russian cavalry officer (Valentin Bryleev). 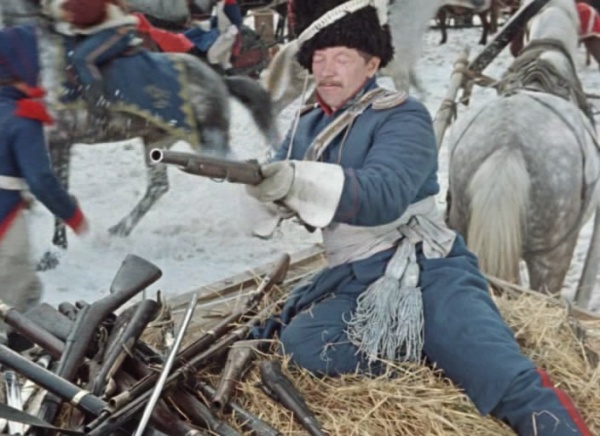 A "musket" is seen on top of a pile of guns. 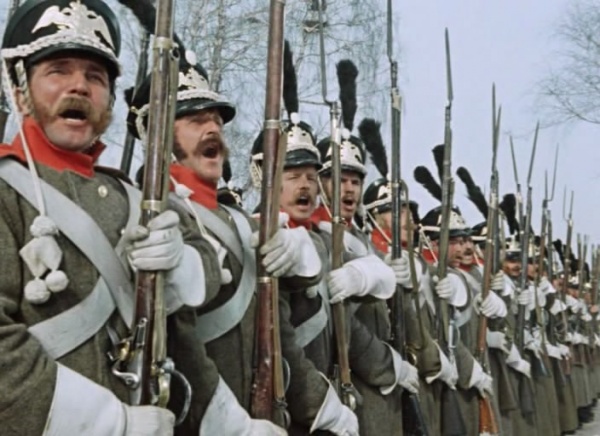 Russian soldiers with "muskets" greet Field-Marshal Kutuzov. The gun at the left is fitted with flint lock while the second from left lacks it.

Ivan (Nikolai Kryuchkov) carries a percussion cap carbine that is supposed to be Lorenz Dornstutzen M1854. Similar carbine is briefly seen in other scenes, possibly it's the same prop.

Ivan carries a carbine in the scene in Summer.

A Cossack officer (Yuri Belov) fires a carbine during the skirmish. A pile of muskets and pistols are seen next to him.

The carbine is seen on the sledge. The shape of the stock is the same that on Ivan's carbine. 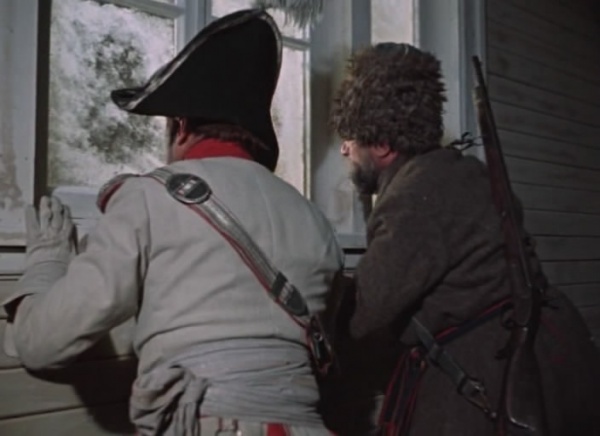 Ivan carries a carbine in the scene in Winter.

In some scenes Mosin Nagant M1891/30 rifles stand for muskets when seen briefly and on distance. 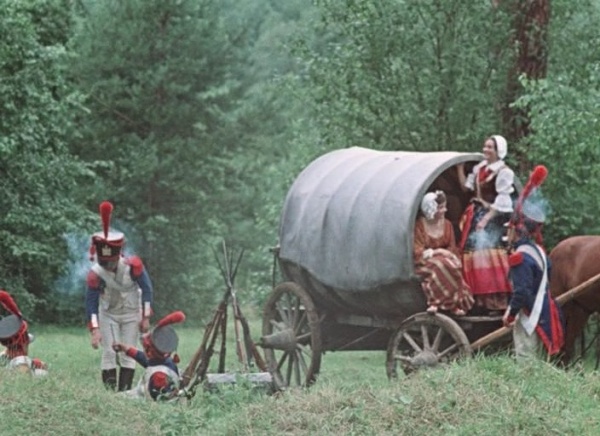 Two flintlock guns with typical Caucasian stocks are seen on the wall together with a pair of flintlock pistols and a pair of Oriental swords.

Russian and French troops use muzzleloading field cannons that appears to be modern replicas. 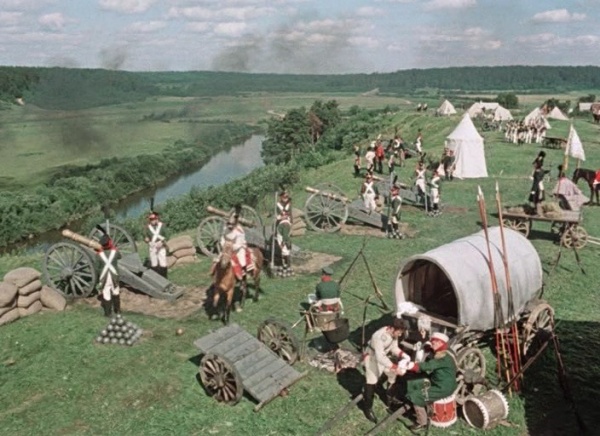 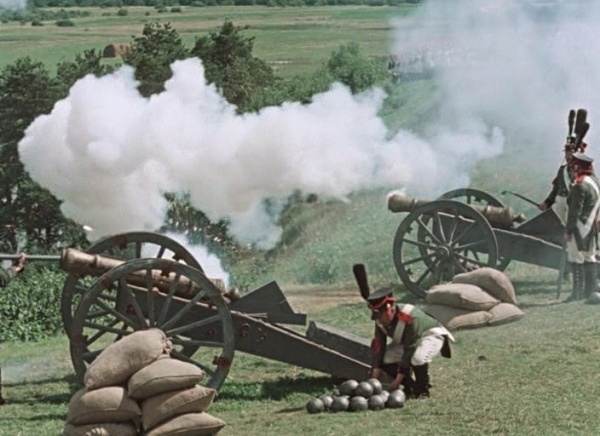 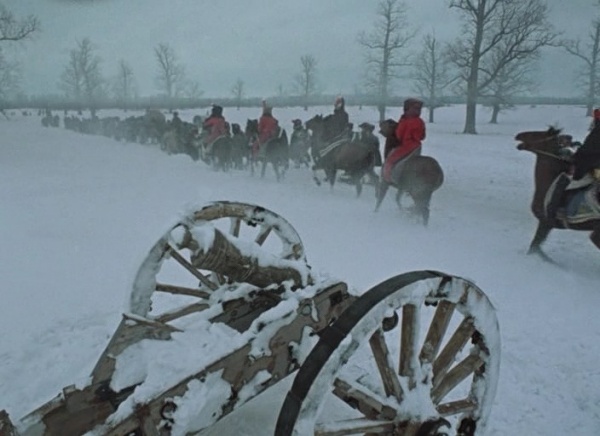 A French cannon is abandoned during the retreat from Moscow.
Retrieved from "https://www.imfdb.org/index.php?title=Hussar_Ballad_(Gusarskaya_ballada)&oldid=1459292"
Categories: