Hornblower is a series of television historical war films based on the novels written by C. S. Forester. Ioan Gruffudd stars as Horatio Hornblower, a fictional Royal Navy officer fighting during the French Revolutionary and Napoleonic Wars. The series consists of eight television films released from 1998 to 2003. The films are based on the novels Mr Midshipman Hornblower (first four), Lieutenant Hornblower (Mutiny, Retribution and partially Loyalty), and Hornblower and the Hotspur (Loyalty and partially Duty) the action of which covers the period from 1794 to 1804.

The following list the films in the Hornblower series:

It's worth noting that three more novels - The Happy Return, A Ship of the Line, and Flying Colours, which are actually the first of the Hornblower series of books - set in the following years (about 1807/08-1811/12), were adapted on screen in 1951 film Captain Horatio Hornblower, starring Gregory Peck. 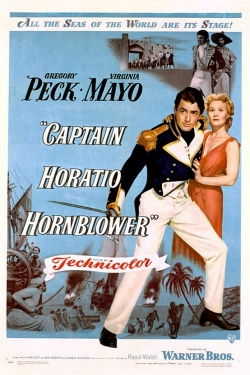