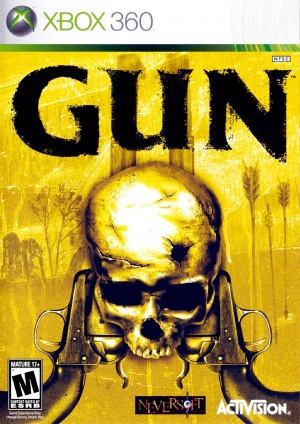 The following guns were used in the game Gun

Colton White (voiced by Thomas Jane) begins the game with a Colt 1851 Navy .36 caliber revolver. In cutscenes, this gun seems to replace the actual gun the player uses, with a few exceptions. 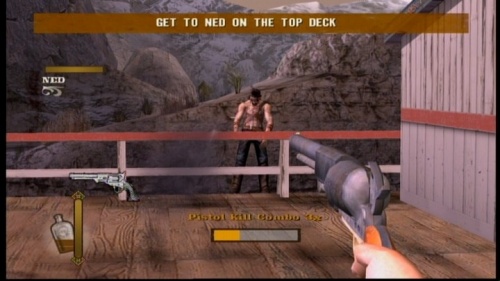 Firing the Colt Navy on the steamboat.

Strangely when used in the slow motion "bullet time" quick draw and in other scenes from the third person, the Colt 1851 turns to the later manufactured Colt 1861 Navy revolver, as the underside of the barrel looks nothing like the 1851 Colt revolver. 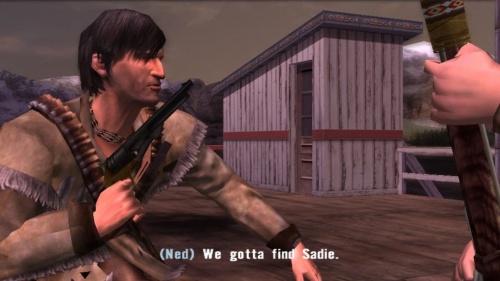 Colton White with his Colt Navy on the steamboat. 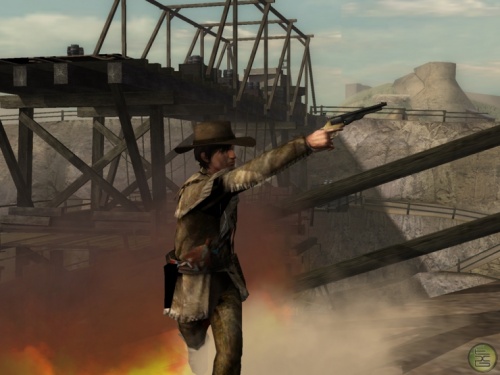 Colton White fires his Colt Navy while defending the bridge in Dodge City.

Jenny (voiced by Kath Soucie) gives Colton a nickel Smith & Wesson Schofield from Ned's trunk in the whore house. Its break open action helps make it faster to reload. However, in the item bag (accessed through the menu) and when used on screen, the revolver appears to be a nickel Remington 1875. 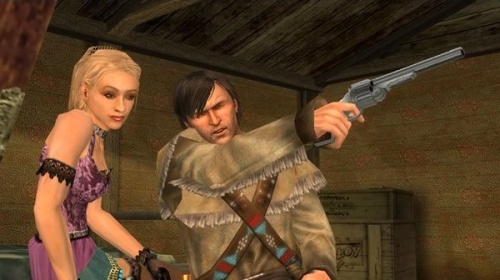 Colton White looks over the Schofield given to him by Jenny. 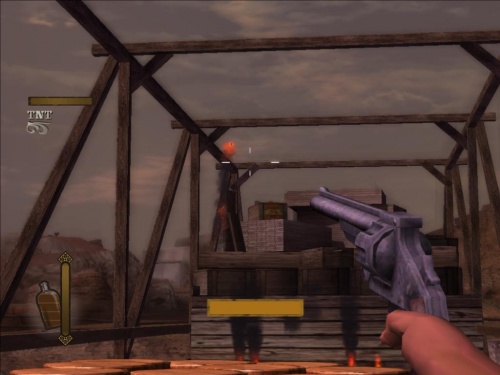 Colton White fires the Schofield during the battle on the bridge.

The Volcanic 10 lever-action repeating pistol is taken off of one of Hoodoo Brown's deputies. It is the pistol version of the unsuccessful Volcanic rifle, which was remodified into the famous Henry rifle. For some reason, this pistol is made out to function like a revolver instead of a repeating pistol. (I don't believe a single repeating lever gun ingame is depicted as one, for that matter.)

Twin Colt "Peacemakers" with golden engraving and ivory grips are used by Mayor Hoodoo Brown (voiced by Ron Perlman) and are later taken by Colton when he kills him. They are depicted as the fastest reloading guns in the game, yet anyone who's actually reloaded them will know that is anything but true. 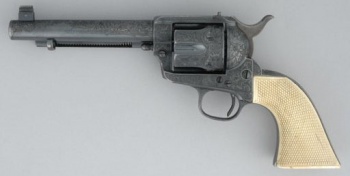 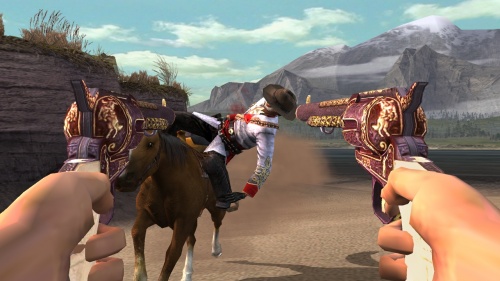 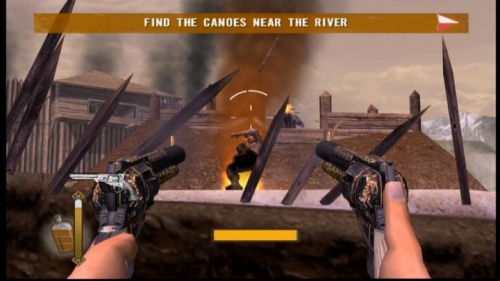 Colton dual-wields the SAAs during a gunfight.

Colton White starts the game off with a Winchester Model 1866 "Yellow Boy" repeating rifle. For some reason, he never works the lever when firing it, only when he reloads it. 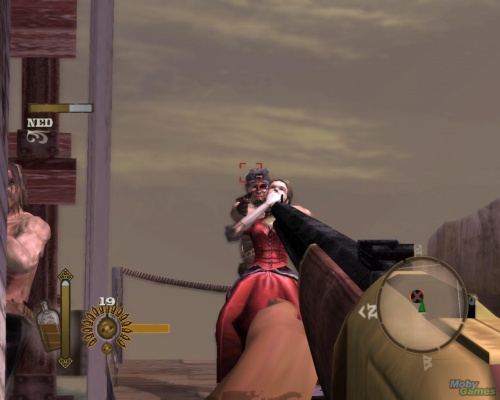 Colton aims the Yellow Boy during the steamboat gunfight.

Ned White's (voiced by Kris Kristofferson) gun of choice is the Ferguson Rifle, invented by British Major Patrick Ferguson. It is depicted as have the fastest rate of fire, which can be considered accurate as the Ferguson Rifle was one of the first breach loaded rifles in British service (and the world) and saw some very limited use in the American Revolutionary War. The rifle was a great improvement over the standard Brown Bess, being able to average 7 rounds a minute compared to the maximum of 4 rounds a minute of the Brown Bess in the hands of a skilled user. However the rifle was more complicated to manufacture, and was 4 times the price of the standard Enfield musket. Hollister takes this rifle for himself when Ned is killed. Colton takes it from Hollister when he is blown up with dynamite, using it to kill "Reverend" Josiah Reed (voiced by Brad Dourif). The Ferguson in the game appears to fire metallic cartridges, but in truth it was a black powder rifle. 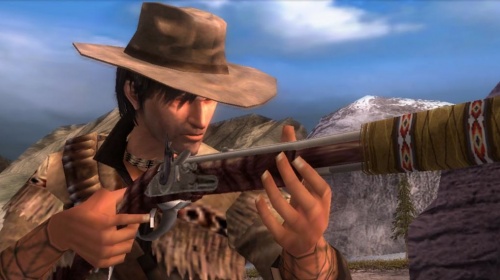 Clay (voiced by Tom Skerritt) gives Colton a Sharps 1874 sharpshooter rifle to fend off Magruder's men. The gun is shown to have the power to sever limbs, which is a little off from reality, but not by much considering that it was chambered for the .45-70 Government cartridge. (Then again, so is people being sent airborne by shotgun blasts, something shown in this game as well.)

Patrick Denton gives Colton a Winchester 1885 High Wall sharpshooter to shoot Soapy's rope before he is choked to death by the noose. The game identifies it as a Remington-Creedmore.

Colton gets a Winchester Model 1887 shotgun off Crude, the main man trying to burn down the whore house. It is inaccurately depicted as a single shot shotgun, instead of a lever action repeater.

One of Hoodoo's deputies uses a Remington 1878 side-by-side shotgun. Colton takes it when he kills him.

Thomas Magruder (voiced by Lance Henriksen) uses a prototype gun similar to the Nock Gun, a seven barreled flintlock rifle that fired all seven shots at once. This prototype is an 8 barreled shotgun that fires each shot one at a time. It is ungodly powerful.

This ridiculous 8 barrel portable cannon looks exactly the same as the Nock, except it fires cannon balls larger than the barrels themselves. It's a pretty far fetched design.

A Howitzer cannon is stolen from MacGruder's men by Colton and Clay's men. It is a stationary gun capable of rapid fire unlike a real cannon. 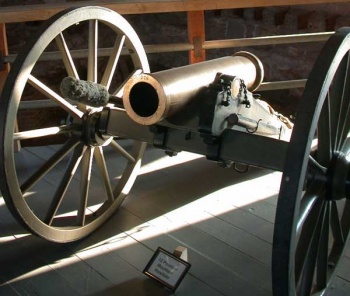 Seen several times in the game, a Colt Gatling Gun is used on several occasions by Colton and the bad guys. It's top-loading magazine is shrunk somewhat to detract away from a limited capacity, as the gun will fire forever. 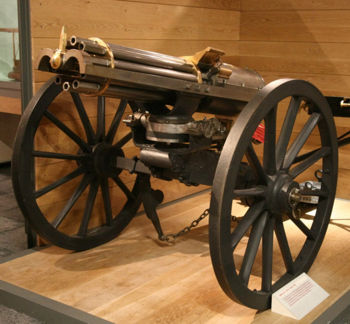