Eye See You (original title:D-Tox) is a 2002 mystery crime-thriller directed by Jim Gillespie (I Know What You Did Last Summer and Venom) and starring Sylvester Stallone as FBI Special Agent Jake Malloy, who is driven to alcoholism following an incident involving a serial killer who targets law enforcement officers. After being forced to go to a detox clinic for law enforcement in Wyoming by his superior, Malloy soon discovers that the serial killer is actually one of his fellow patients when the others are found murdered one-by-one. The ensemble cast includes Robert Patrick, Charles S. Dutton, Polly Walker, and Kris Kristofferson.

The following weapons were used in the film Eye See You: 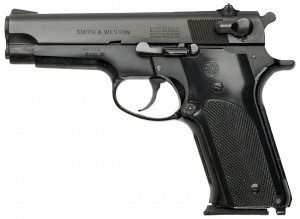 Doc puts Malloy's 59 in a safe among the rest of the patient's sidearms.

Jones hands Malloy his sidearm back, after they deem him trust-worthy again.

Malloy holds his sidearm outside of the clinic.

FBI Agent Chuck Hendricks (Charles S. Dutton) uses a Glock 17 as his sidearm. He offers it to Malloy at one point, to take his own life before forcing him to go to the detox clinic. Frank Slater (Christopher Fulford), Willie Jones (Courtney B. Vance), and Peter Noah (Robert Patrick) also use Glock 17s as their sidearms in the film.

Jake contemplates redecorating the wall behind him with brain-matter grey.

Noah reacts to a noise, his Glock 17 in hand.

Jaworski (Jeffrey Wright) uses a Smith & Wesson 5906 in the film.

Jaworski holds his Smith & Wesson 5906 after a heated argument. 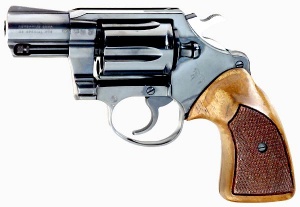 Malloy hands the Colt to Jenny.

The SWAT officer on the right has an MP5A2.

SWAT snipers wield M16A1 rifles fitted with M16A2 handguards in the beginning of the film.

M16A1 with A2 style handguards - 5.56x45mm. Putting the distinctive A2 handguards on the older rifle was a method used by Movie/TV armorers to simulate A2 rifles when M16A1s were the only ones available.

A SWAT sniper takes position with his M16 rifle.

A SWAT officer on the left with an M16 rifle.

Various rifles and shotguns are visible when Chuck Hendricks visits a hunting store.