Dogville is a 2003 co-production English language avant-garde drama film written and directed by Lars von Trier and starring Nicole Kidman as Grace Mulligan, a young woman on run from mobsters, who arrives in the small mountain town of Dogville, Colorado. Here she finds refuge in return for physical labor but soon the people, whom Grace perceived as kind and merciful, abuse their position of power and turn her into a slave.

The following weapons were used in the film Dogville: 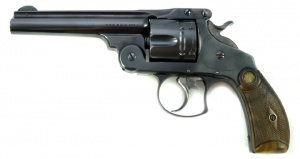 The sheriff (uncredited) carries a revolver in holster.

The grip of sheriff's revolver is seen in another scene.

A mobster fires a revolver at a townsman in the final scene.

One of the mobsters holds a pistol that is seen blurry and unclear. It may be an M1911 but it's only a guess.

A mobster fires a pistol at townspeople. This gun seems to be hammerless.

In the final scene several mobsters are armed with Thompson M1921AC submachine guns.

A mobster orders too eloquent Tom Edison to shut up under the threat of a gun.

A Thompson is seen in hands of a mobster at the left.

A mobster holds a Thompson at the foreground.

A mobster fires a Thompson.

A mobster with a Thompson.

A mobster is armed with a pump action shotgun of unclear model. The angular shape of the rear part of the receiver resembles Stevens Model 520 but it's hard to say for sure.

For reference: Stevens Model 520 with 28" Field Barrel - 12 gauge. While the barrel of the screen gun is shorter, the shape of the receiver with visible step on top best matches this particular model.

A shotgun is partially seen in hands of a mobster at the far right.

Another view of the same shotgun.

The mobster fires his shotgun at townspeople.

A mobster at the foreground holds a shotgun.
Retrieved from "https://www.imfdb.org/index.php?title=Dogville&oldid=1472782"
Categories: