Chasing Two Hares (Za dvumya zaytsami or Za dvoma zaytsyami in Ukrainian) is a 1961 Soviet Ukrainian cult classic comedy (with musical elements) directed by Viktor Ivanov. Based on the theater play by Mikhail Staritskiy, the movie follows misadventures of an 1910's barber shop owner and a con man Svirid Petrovich Golokhvosty (Oleg Borisov in his first famous role) who tries to marry both rich but ugly Pronya Prokopovna (unforgettable Margarita Krinitsyna) and a pretty peasant girl Galya (Natalya Naum), her cousin. Film was originally a B movie n Ukrainian language only relased in Ukrainian Republic of Soviet Union, but after immense success a new soundtrack was developed in "surzhik" a mix of Ukrainian and Russian languages and that's the variant most frequently seen, loved and quoted in the most of the Post-Soviet countries. Ukrainian sound was labeled as a lost variant until in 2013 it was suddenly found in cinematic archive of the Ukrainian city of Mariupol. This version was briefly re-released theatrically, though, limited. It was also remade as a musical (set in modern times; it was based on the same play, but with heavy influence from this film) in 2004. Among with the The Lost Letter (Propala hramota), this movie were the two most popular Soviet movie, filmed complitely in Ukrainian language.

At some point of the movie Golokhvosty takes Pronya Prokopovna to an early cinema theater mysteriously named "Vampire". Here they watch a film-within-the-film named "The Cruel Mathilda" which follows eponymous Mathilda (N. Lapshina), who, trying to resolve a situation with her many lovers turns into a serial killer. A segment is basically parodying clichés of silent era romantic dramas. In the first scene of the movie we can see a Russian Nagant M1895 which is obviously firing blanks ans sometimes just pretended to be fired, but it's still a part of parody so doesn't count as a continuity goof. The gun is used by one of the lovers (Vladimir Shiryaev) and Mathilda herself. 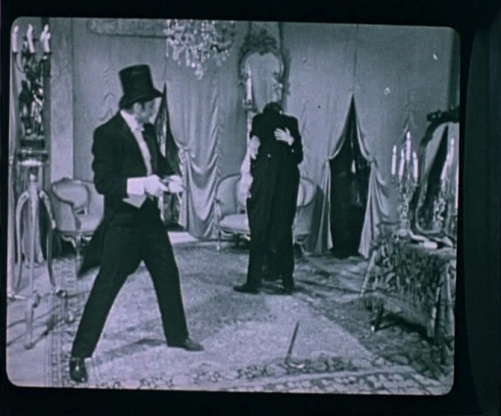 One of the lovers (Vladimir Shiryaev) readies his revolver, after seeing who he thinks to be Mathilda with another lover. 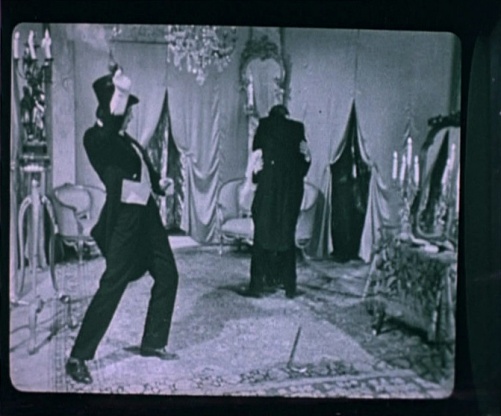 Then he shoots in the air to draw the attention (an obvious blank). 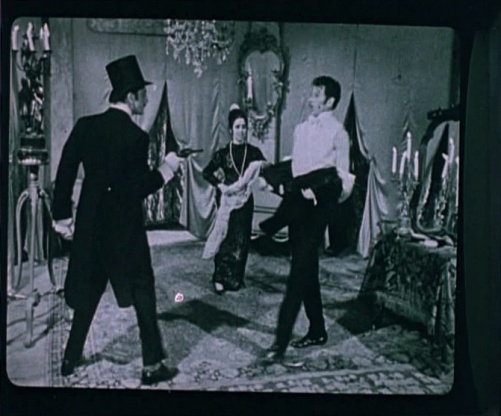 One of the lovers aims his revolver (the clearest shot of it which makes us sure that it's Russian Nagant M1895) on another, not noticing that the woman is not Mathilda, but another one (Fausta Ivanova). 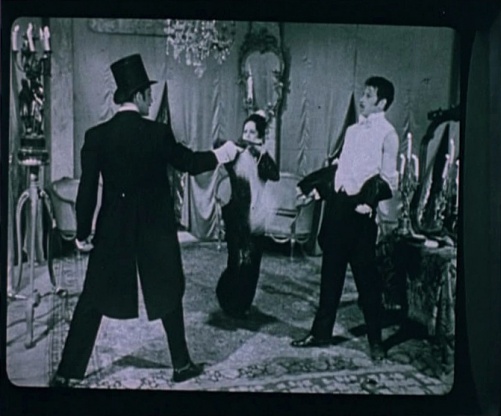 So woman tries to improve the situation. 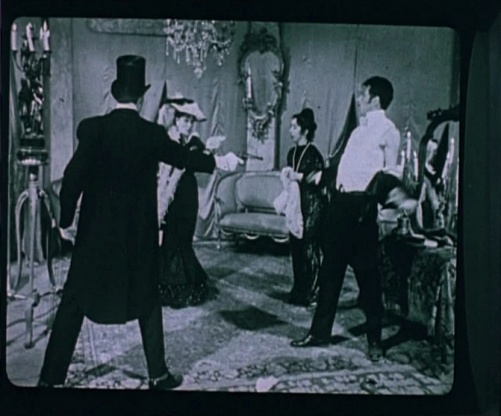 And only succeeds in this when Mathilda appeared. 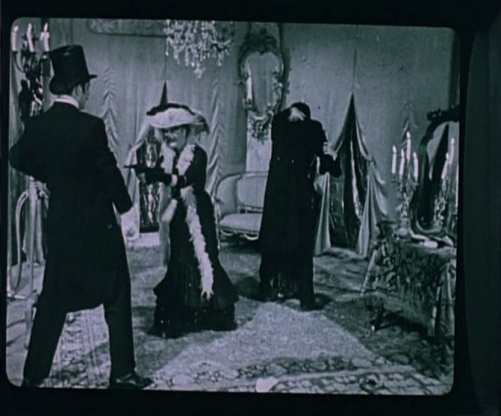 But suddenly, Mathilda, who, probably, planned the whole situation, shoots one of the lovers herself, taking his revolver... (when she shot him she just pretended that she shoots!) 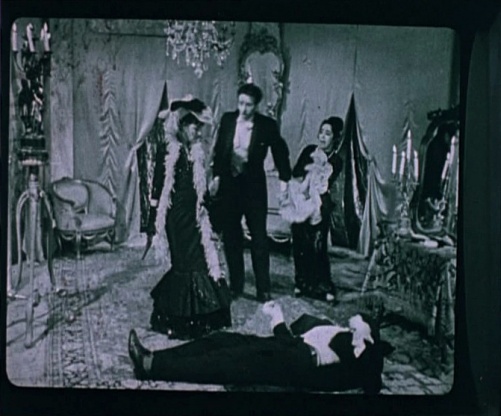 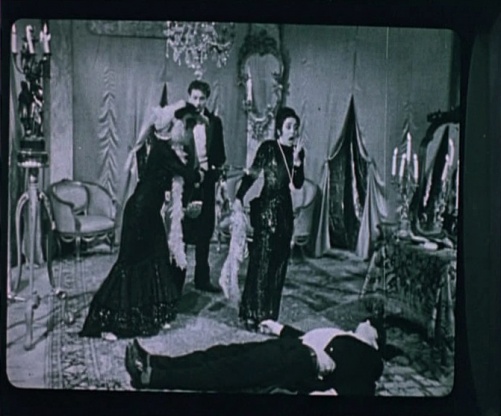 ...and then she shoots the other woman (again, an obvious blank and it doesn't even match the needed vector). 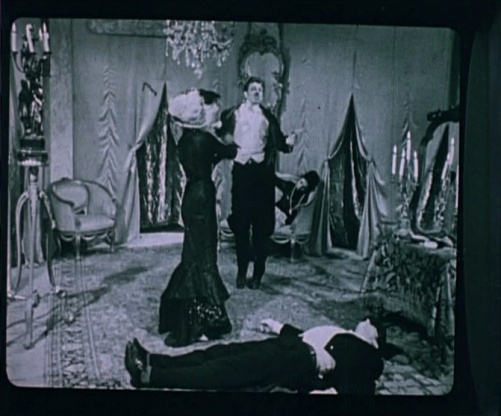 And then Mathilda finishes the other lover (a "muzzle flash" in the shot is the brief white cloud you can see on his jacket, on the left). In the second scene actors swap their roles as other lovers and the weapon used by one of them and Mathilda is a knife.

A marching squad of imperial Russian soldiers can be seen twice in the movie, both times facing awkward situations. They all (except for the officer) can be seen armed with assorted Mosin Nagant Rifles with full bayonets. Both Soviet and Imperial variants can be glimpsed, because Imperial were much more rare at the time of filming. 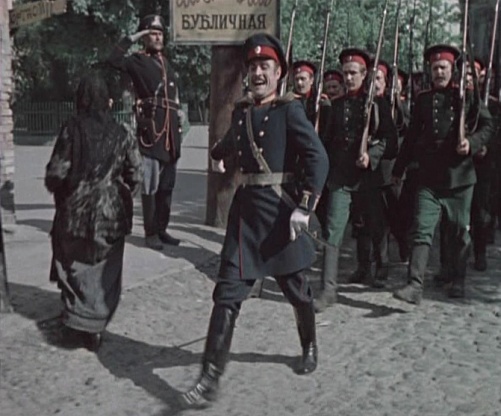 A squad of soldiers marching on the street. 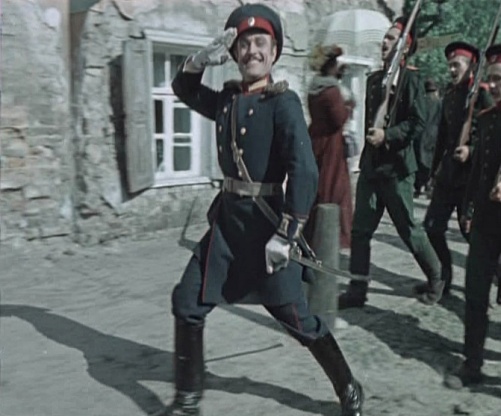 A squad of soldiers marching on the street 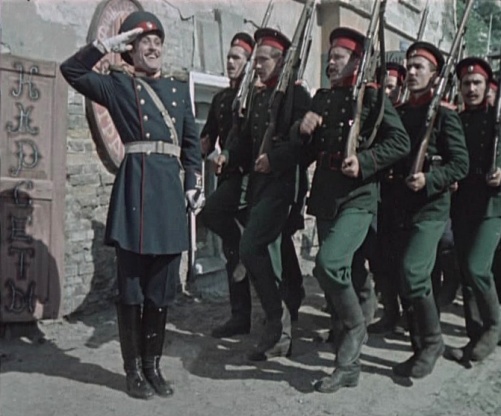 Note both Soviet and Imperial variants. 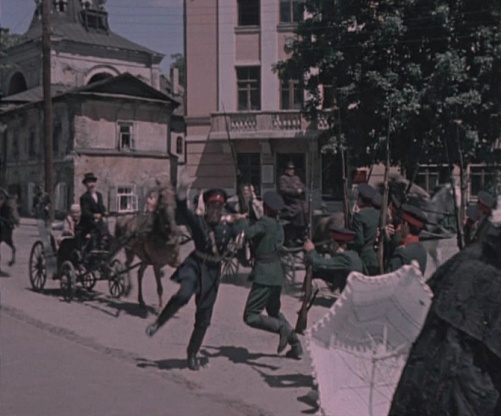 A squad of soldiers is forced to break the march and run. 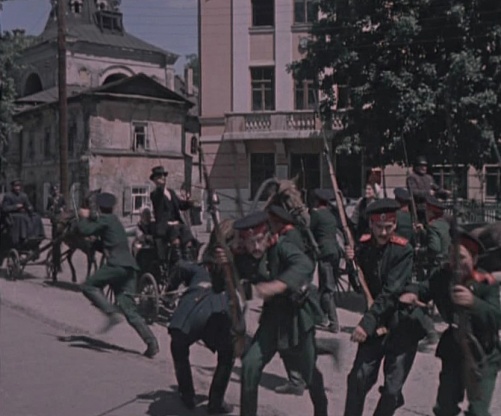 A squad of soldiers is forced to break the march and run.

There are a few other guns which were shot such way that it's hard (if not impossible) to identify them properly. The first one is something, seen hanging on the shoulder belt (though it's swordbelt rather than a rifle sling, there's still a possibility that it's a firearm) of some uniformed extra in the beginning of the movie and the next one is a holstered handgun that can be seen on guard watchman in the same scene in which a soldier squad appears. In this case the holster is typical for Nagant revolver, but it's hard to say if there is a gun in it or it's empty. 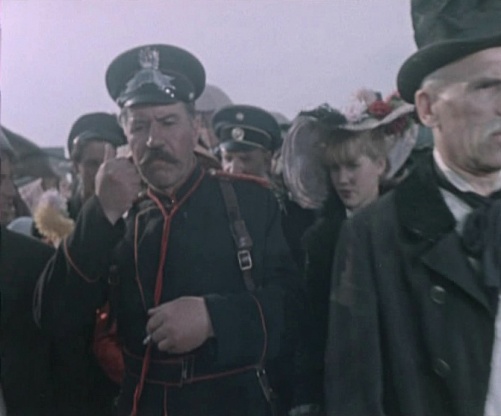 Unknown firearm (rifle?), seen hanging on the shoulder belt of some uniformed extrain the beginning of the movie

A guard watchman in the background has a holstered gun hanging on his belt.
Retrieved from "https://www.imfdb.org/index.php?title=Chasing_Two_Hares_(Za_dvumya_zaytsami)&oldid=1354133"
Categories: