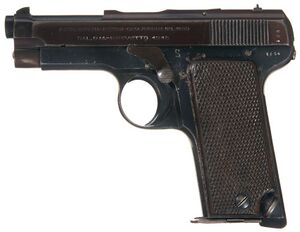 M1915 was the first semi auto pistol, manufactured by the famous Fabrica d'Armi Pietro Beretta company. It was designed by Tullio Marengoni as a more simple and robust replacement for Glisenti Model 1910 pistol. The Italian Army adopted the Beretta pisol and used it as a service weapon Modello 1915 during WW1. There are various statements about the caliber: while some sources claim that M1915 was mostly produced in .32 caliber, another ones tell that it was a Navy issued M1917 version that used .32 caliber while Army issued M1915s were in 9mm Glisenti. Improved version M1915/19 (should not be confused with a .25 caliber Beretta M1919) had a little different style of the open-top slide that became the standard for Beretta pistols for nearly a century.

The Beretta M1915 and variants can be seen in the following films, television series, video games, and anime used by the following actors: