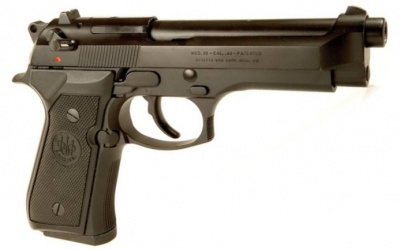 The Beretta 96 pistol series is a series of pistols made by Beretta, derived from the Beretta 92 pistol series. They are externally similar to the 92 series, but are chambered for the more powerful .40 S&W round. Most 92 models, such as the Vertec, Brigadier, or Elite are available in .40 S&W as well. The standard magazine size is 11 rounds, 10 for locations where magazine capacity is restricted. 12-rounded magazines were introduced with the 96A1 in 2010. An Italian company, Mec-Gar, also offers hi-cap magazines with 13 (Flush Fit) or 15 round capacities.

The Beretta 96 pistol series and variants can be seen in the following films, television series, video games, and anime used by the following actors: