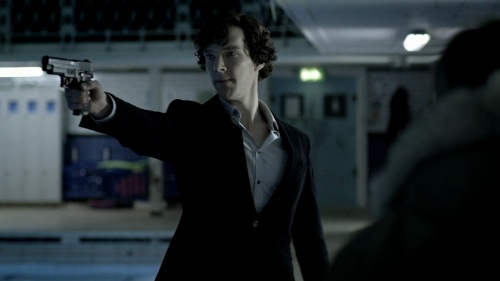 Benedict Cumberbatch with a SIG-Sauer P226 in Sherlock - Season 1.

Benedict Cumberbatch is an English actor well known for his roles as Dr. Stephen Strange in several productions within the Marvel Cinematic Universe and Sherlock Holmes in the BBC series Sherlock, a role for which he received a Primetime Emmy Award for Outstanding Lead Actor in a Miniseries or a Movie. He also has appeared in such films as 12 Years a Slave, 1917, and 2011's Tinker Tailor Soldier Spy. He received an Academy Award nomination for Best Actor for his role as Alan Turing in the 2014 film The Imitation Game. Cumberbatch returned to voice Dr. Strange in the Disney+ animated series What If...?.