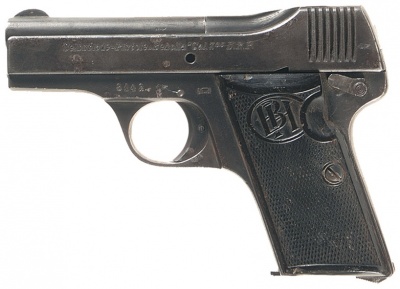 The Becker & Hollander Beholla was a pistol which served as a secondary sidearm of the Imperial German Army during WWI. The Behola was a mediocre firearm, however it was robust meaning that it was often issued to lower level troops when the more refined Luger P08 and Mauser C96 were in short supply. Due to it using a straight blowback action and the barrel being fixed to the frame (complicating field stripping) the Behola was relatively accurate and reliable, even with wartime shortcuts being taken in its production. Around 45,000 were manufactured during the war, some by other companies such as "Stenda" and "August Mentz" leading to variation in the grip markings. The longer 8 round magazines from a Colt Model 1903 will fit the Beholla, but not vice versa.

The Becker & Hollander Beholla and variants can be seen in the following films, television series, video games, and anime used by the following actors: