Assassin's Creed IV: Black Flag is the fourth main game in the popular Assassin's Creed series, developed by Ubisoft Montreal and released in October 2013 for PS3 and Xbox 360 and November 2013 for Wii U, PS4, Xbox One and Windows PC. The plot is a rather complicated meta-fiction in which the unnamed player character is a playtester for fictional game studio Abstergo Entertainment, working on their flagship project to use the series' fictional "Animus" past-reading technology to make a videogame set in the Caribbean between 1715 and 1720, during the last years of the Golden Age of Piracy.

The majority of time is spent in this game-within-the-game controlling a pirate captain named Edward Kenway, grandfather and father of two of the protagonists of Assassin's Creed III. Following a battle at sea, Kenway takes on the identity of a defecting Assassin, Duncan Walpole, and soon finds himself in command of a pirate brig he names the Jackdaw and involved in both the real-life politics surrounding the pirate stronghold at Nassau and the war between the Assassins and the Templars, while outside of the simulation the player character finds Abstergo's plans might be more sinister than just poor post-release support for the PC version.

The present-day segments of the game are played in first-person mode, while the game-within-the-game is an open-world third-person stealth-action game. Amusingly, the game uses period-accurate English capitalisation in the subtitles of Kenway's parts of the game, with all nouns capitalised as they are in German.

The player character, Edward Kenway, carries a number of weapons in a four-direction inventory, including various tools like smoke bombs and later a blowpipe. His primary weapons are a pair of swords and a brace of single-shot pistols; by default he carries two, while upgrades can be crafted allowing the number to be increased up to four, which Kenway can fire using a spinning "combo" animation or use for aimed shots; oddly, they can only be reloaded when every pistol has been fired. It is also possible to pick up rifles found in the world and use them as a temporary weapon, but they cannot become a permanent part of Kenway's inventory and will be dropped if any other weapon is selected.

Permanently upgrading Kenway's armament requires purchasing weapons from merchants which unlock at set points in the campaign; these can then be equipped in place of the default flintlocks and swords. The best weapons also require specific tasks be completed in order to unlock them.

After a number of missions are completed, Kenway gains control of the Jackdaw. The brig's weapons are operated by rotating the in-game camera; forward fires the chase guns, the sides broadside cannons and heavy shot, and astern explosive "fire barrels." Mortars can also be purchased, which are then aimed using the spyglass normally used to sight other vessels. Finally, the swivel guns can be operated by holding down the button to use them when a crosshair target appears, until the gun's target crosshair has aligned with it; releasing at this point will fire the swivel gun. Fire barrels, mortars and heavy shot for the broadside cannons have limited ammunition, while all other weapons do not.

The Jackdaw can also be upgraded, which requires both money and materials gained primarily by capturing and looting other vessels found in the open ocean. This allows a progressively more absurd amount of cannons to be mounted, as well as increases to the damage and ammunition capacity of the ship's various weapons. The final tier of upgrades generally require hidden plans to be found (or the accurately-named "Timesaver" DLC to be purchased) and usually turn the weapon in question gold, though the final hull upgrade instead appears to turn the Jackdaw into the world's first ironclad (!).

Kenway's default ranged armament is a brace of Flintlock Pistols, and these are also used by most allies and enemies. 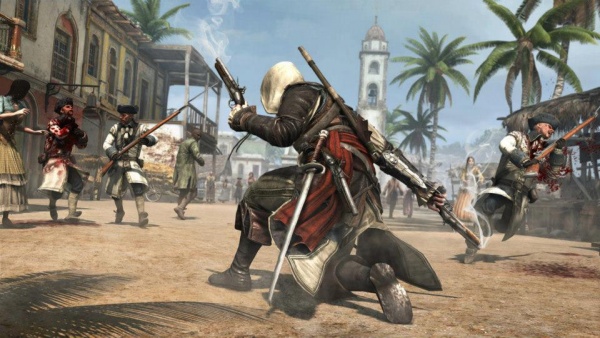 Kenway with four flintlock pistols in a promo screenshot. 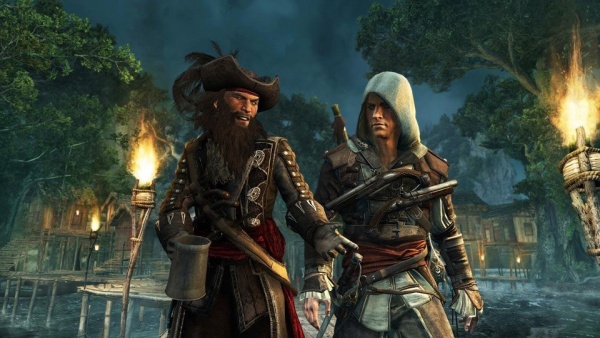 Two flintlock pistols are visible in the brace on Kenway's chest as he speaks with Edward Thatch, better known as Blackbeard.

The "Pirate Blunderbusses" are Blunderbuss flintlock pistols. They have the highest damage available for pistols, but minimal range.

An 18th century Italian blunderbuss flintlock pistol replica produced by Denix is wielded by Kenway in the cinematic trailers. 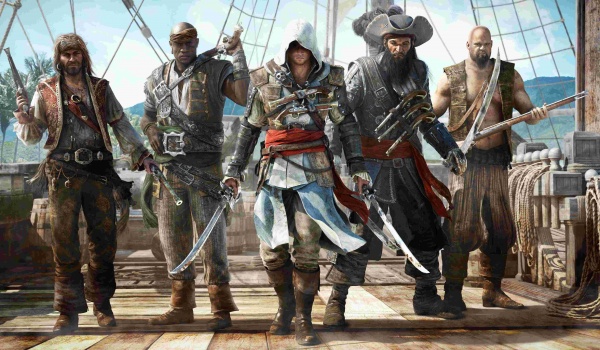 Promo image. Note the two blunderbuss pistols based off Denix' Italian replicas being carried by Kenway. The two gentlemen on his right also wield that particular model.

An 18th century Pirate blunderbuss flintlock pistol replica produced by Denix is wielded by Kenway in the cinematic trailers. The particular variant appears to be the very rare dragon head grip one which is no longer in production and can be seen only in the 2005 Denix product catalogue. This particular modification has ID numbers of 1074G and 1074L.

Kenway with two blunderbuss pistols based off Denix' Pirate replicas.

The "Captain's Wheellock Pistols" are based on late 16th century wheellock pistols inlaid with engraved bone.

A pair of Spanish-style swords with built-in miquelet lock pistols can be acquired as a bonus weapon; these cannot actually be fired like the normal pistols, instead simply firing for additional damage at the end of melee combos. 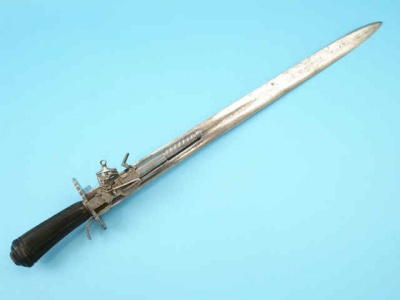 The "Common Flintlock Pistols" are based on the Hawken Percussion Pistol. This is anachronistic for the early 18th century setting as the Hawken pistols along with their percussion mechanism were produced in the 19th century. 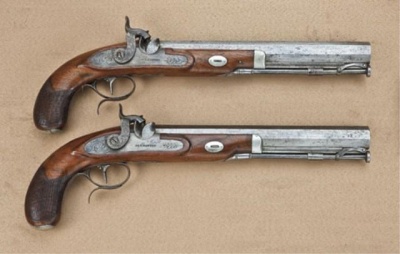 The "Cannon-Barrel Pistols" are inspired by the Dutch flare/canister shot flintlock pistols crafted by L. de Meyer in 1730s or 1760s.

The "Golden Flintlock Pistols" are based on the ivory flintlock pistols crafted in 1786 by gunsmith Johan Adolph Grecke for Empress Catherine the Great.

The Harper's Ferry Flintlock is being carried by Blackbeard in promotional images. It is also seen on some customization skins for the Mercenary in multiplayer. Its appearance in 1715-1720 is heavily anachronistic as the first model was not made until 1805.

Promo image. Note the anachronistic Harper's Ferry Flintlocks being carried by Blackbeard presumably due to recycling from Assassin's Creed III.

The Russian Pattern 1809 Officer Flintlock Pistol is seen in concept art of multiplayer weapons. It is anachronistic almost by a century.

The same Brown Bess/Enfield Pattern 1853/Kentucky Flintlock Rifle hybrid musket returns from Assassin's Creed III. It appears to be a placeholder as it appears only in early promotional images for the game. All the three weapons behind the hybrid are anachronistic for the 1715 setting of the game; the British troops of this era were armed with doglock muskets. 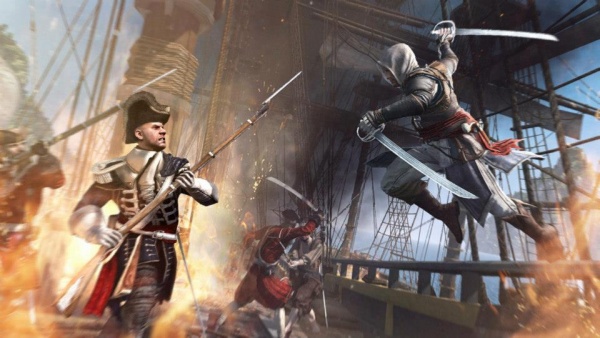 British troops with hybrid muskets in a promo screenshot. Also note the anachronistic bicorne worn by the British captain.

The musket used by the enemy gunners is a hybrid. It has a Madrid type stock and an overtly long flintlock plate which actually resembles earlier matchlock plates. The generally crude handguard and the ramrod going inside the wooden handguard also hint toward a matchlock musket influence. The Madrid type stock might be anachronistic for the early 18th century period as most of the weapons with this design date to the late 18th century.

These are sometime seen in weapon caches or the hands of enemies, and are always found in the hands of the snipers posted on the masts of larger enemy warships. Kenway can pick up and use them, though they are loud and unwieldy.

Spanish soldiers with hybrid muskets in a promo screenshot.

The Spanish soldier on the left wields and anachronistic Brown Bess.

One of Edward's pirates with the Brown Bess.

Cannons are the primary armament of the warships and fortresses seen throughout the game. The Jackdaw has two types; chase guns that fire chainshot, which does little damage but slows enemy vessels down (a rather unrealistic depiction of the effect of the ammunition, which was designed to smash a ship's masts) and broadside cannons which can fire aimed normal shot or unaimed heavy shot. The number of cannons on the Jackdaw can be upgraded using materials.

As with all of the Jackdaw's weapons, there is no animation for reloading the cannons, the weapons simply becoming ready again after a short interval. Perhaps most bizarrely, the final upgrade for heavy shot allows the cannons to be fired twice per unit of ammunition. 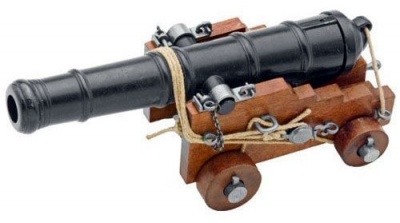 The Jackdaw can be upgraded to mount a pair of large brass mortars on her foredeck; while this was actually done in the 17th century, such "bomb vessels" were specialised ships, not ordinary brigs like the Jackdaw, and this was certainly not a standard feature of large warships as is shown on the Men O' War encountered in the game.

Mortars fire a strange airbursting non-conservation-of-mass submunition round which rains cannonball-sized projectiles over a wide area; when used by enemy ships or forts, their radius of effect is shown as a yellow circle indicating their projected point of aim and turns red when the round is about to impact. The exception to this is the legendary warship La Dama Negra (The Black Lady), which does not have aiming circles for her mortars. Bizarrely, her mortars are mounted as a large battery amidships resembling a modern VLS array rather than anything that might have existed at the time.

The Jackdaw is equipped with a pair of muzzle-loading swivel guns on either side of the rear deck, which can be used during boarding actions and to target fire barrels and weak spots on enemy vessels and fortresses if these are revealed by scoring hits with other weapons. When boarding, the shots have a substantial splash damage radius, appearing to fire explosive shot; this would have been impossible at the time, since period explosives were not stable enough to withstand the rigours of being fired from a long-barrelled gun.

Their rate of fire is ridiculously high for muzzle-loaded guns and there is no reloading animation, the guns able to fire five sequential shots during boarding and as many as there are targets the rest of the time. This is an odd oversight, since period breech-loading swivel guns with preloaded breech blocks would actually be able to fire almost as quickly as the weapons in the game do. 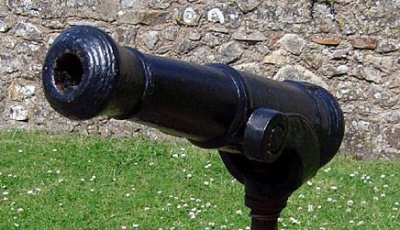