The following weapons were used in the film American Hustle: 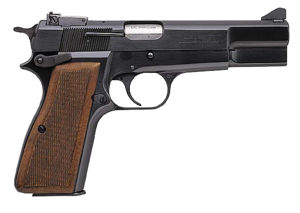 Another Browning is held by Stoddard Thorsen (Louis C.K.).

Irving Rosenfeld (Christian Bale) is seen taking a Walther PPK from a safe. He then holds it on Richie during a confrontation. In the trailer, he appeared to be holding an M1911A1.

Rosenfeld takes the Walther from the safe.

In the trailer for the film, Irving Rosenfeld (Christian Bale) appeared to be holding an M1911A1 instead of a PPK during a confrontation. Likely, the PPK was replaced so the pistol didn't appear to be pointed directly at another person (as this is not allowed in US "Green Band" theatrical trailers).
Retrieved from "https://www.imfdb.org/index.php?title=American_Hustle&oldid=983343"
Categories: