Alien is the 1979 science fiction film that launched the Alien film franchise. Directed by Ridley Scott, the film revolves around a space transport crew who stumble upon an unknown lifeform that poses a grave threat to their lives. The film launched the movie career of Sigourney Weaver and would spawn three direct sequels: Aliens, Alien³, and Alien: Resurrection as well as the Alien vs. Predator series of films. For the film's twentieth anniversary, a "Director's Cut" of Alien was released with added scenes. Ridley Scott would return to this universe in 2012's Prometheus and 2017's Alien: Covenant.

The following weapons were used in the film Alien: 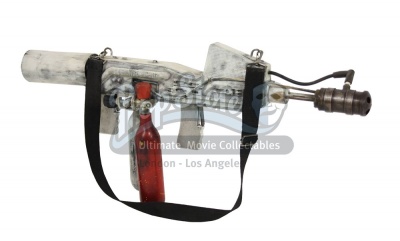 Closeup of the flamethrower used by Dallas (Tom Skerritt).

In a scene from the Director's Cut, Ripley (Sigourney Weaver) uses the flamethrower. This scene would be echoed in both Aliens and Alien: Resurrection.

Ripley (Sigourney Weaver) heads for the shuttle holding the flamethrower.

Ripley is seen holding a harpoon gun when confronting the Alien in the escape pod. It is likely based on a Mares Snub Nose.

Ripley (Sigourney Weaver) enters the shuttle with the harpoon gun.

Closeup as the barbs are deployed.

Closeup as the gun is jammed in the door.

Before investigating the derelict ship, Dallas (Tom Skerritt) tells the crew to break out the weapons, the larger of which was based on the Swiss Rexim-Favor, the other based on a Webley Junior Mk II Air Pistol. According to the novelization of the film, these are laser pistols. The Rexim-Favor-based weapon features a 4x20 scope and an underbarrel Singlepoint scope (which would make the scope unusable). The Rexim-Favors were used by the actors dressed in full-sized spacesuits, while the Webleys were used by children dressed in scaled down spacesuits, who were used in all wide shots to make the derelict set seem bigger. While not seen being fired, they are seen in holsters on the crew's spacesuits and Kane (John Hurt) is briefly seen holding one in the Director's Cut. 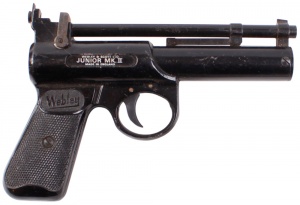 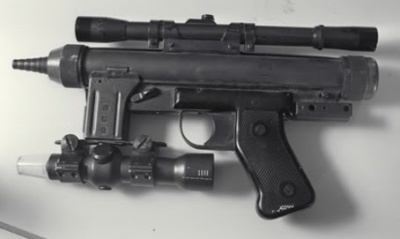 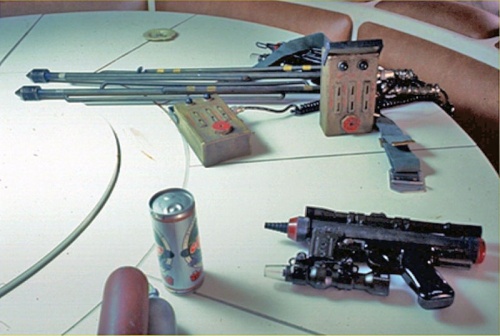 One of the handgun props is seen below the cattle prod prop. This is based on the Swiss Rexim-Favor. 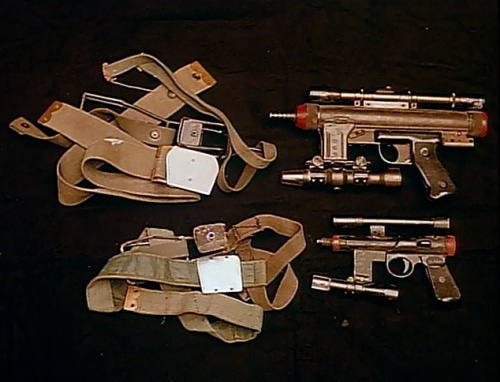 A display of the some of the weapons. 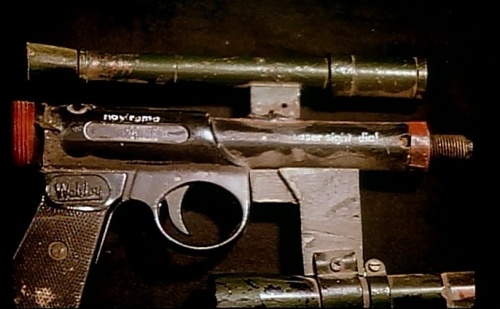 A handgun is briefly seen in a holster in Kane's yellow spacesuit. In order to make the set seem larger, children were dressed up in smaller scale suits.