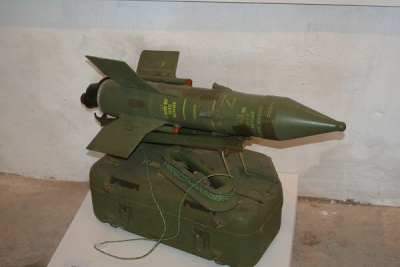 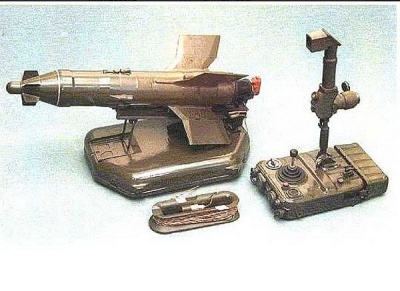 AT-3 Sagger is the NATO designation for the Russian Malyutka (Малютка, "Little One") wire-guided anti-tank missile. It was developed in the 1960s based on earlier Western MCLOS missiles such as the French ENTAC and Swiss Cobra, and was the first Soviet man-portable anti-tank missile, as well as one of the most prolifically produced ATGMs of the Cold War. The missile is rail-launched: in infantry use it is issued in a 9P111 fiberglass backpack carrying case which contains one missile split into warhead and engine sections and a firing cable on a plastic spool, and has a detachable launch rail which mounts to the backpack's lid. The missile is identified as 9M14, while the three-man manpack system (two complete launchers and one control unit) is identified as 9K11. The system was also used by the BMP-1 and BMD-1 IFVs, the BRDM series of scout cars, and the Mi-2, Mi-8, Mi-24 and Yugoslavian Soko Gazelle helicopters.

The missile arms almost immediately and can manoeuvre using vectored thrust within 5 yards of the launcher, but can only be captured by the gunner at 550-875 yards (to cover this enormous deadzone, one of the crewmen would be issued an RPG-7). Range is around 1.86 miles. The baseline missile is relatively slow with an average speed of only 270 miles per hour, taking up to 26 seconds to reach maximum range and making evasive action readily possible.

Older variants (AT-3A (9M14 Malyutka), AT-3B (9M14M Malyutka-M)) are MCLOS missiles guided using a 9S415 control console which includes a joystick and 9Shl6 8x magnifying periscope monocular viewer for visually tracking the missile at range: a tracking flare assists in visual identification of the missile in flight. One control console can be connected to up to four launchers, and will launch them consecutively. Like all MCLOS missiles not featuring TV guidance, it is difficult to use against a moving target since the operator must keep track of both the missile and the target at the same time.

Later upgrades to the vehicle and helicopter mounted versions were wire-guided IR SACLOS systems (AT-3C (9M14P Malyutka-P), AT-3D (9M14-2 Malyutka-2)) developed as a stopgap prior to the deployment of the AT-5 Spandrel and AT-6 Spiral ATGMs, but since the Soviet Union already had newer SACLOS ATGM systems for infantry, no equivalent tracking system for the portable Sagger was ever developed. The two-part nature of the system does mean that earlier MCLOS missiles can use the more advanced warheads from later SACLOS weapons. Some foreign SACLOS infantry variants do exist, generally using a modified version of the 9P135 launcher for the AT-4 Spigot and AT-5 Spandrel (9P135M and later).

The missile has been extensively copied and improved on, with clones produced by Serbia (Malyutka-2T), China (Hongjian-73 (红箭, "Red Arrow"), a copy of the AT-3B, and the SACLOS-guided Hongjian-73B, C and D which use a guidance system derived from the Hongjian-8 ATGM) and Iran (Raad (رعد‎, "thunder") and the SACLOS-guided I-Raad) among others. Romania produces a version which uses a tandem-charge warhead from the MILAN-2T. While the basic missile is well and truly obsolete, modern versions boast improved motors to increase range and speed, greater manoeuvrability, and extremely powerful warheads: one Serbian tandem-charge variant has a claimed penetration of up to 39.4 in (100 cm) of RHA.

The AT-3 Sagger can be seen in the following video games: