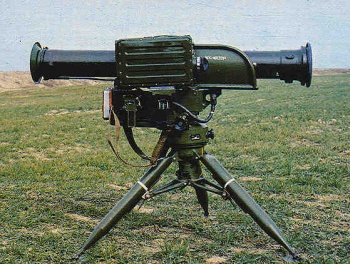 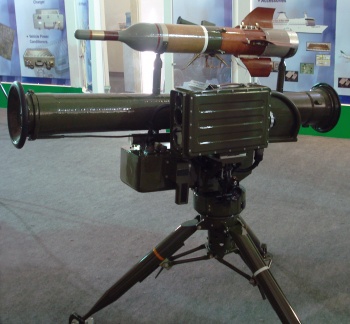 Baktar-Shikan launcher, an HJ-8 variant produced under license by Pakistan, with missile - 120mm

Hongjian-8 (红箭, "Red Arrow") is a Chinese crew-served wire-guided anti-tank missile system first deployed in 1985. The system was developed as a replacement for the Hongjian-73, a Chinese copy of the AT-3 Sagger missile system. It is generally agreed to be the result of reverse-engineering three distinct Western missile systems: the tripod is based on the launcher for the American BGM-71 TOW, the tracker derived from the French MILAN system, and the missile is based on the British Swingfire.

The HJ-8 and variants can be seen in the following films, television series, video games, and anime used by the following actors: