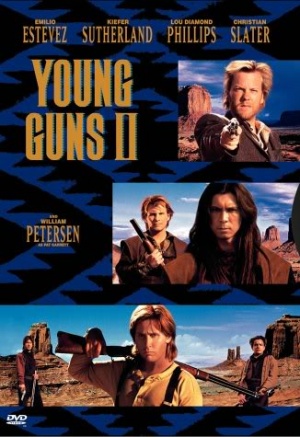 Young Guns II is the 1990 sequel to Young Guns. Emilio Estevez returns as the outlaw known as Billy the Kid, who is unexpectedly reunited with members of his old gang as he is hunted down by his old friend Pat Garrett (William Petersen). As in the original Young Guns, this film does a very interesting job of explaining certain events in the last days of Billy the Kid's life. The cast includes returning Young Guns stars Kiefer Sutherland and Lou Diamond Phillips as well as Balthazar Getty, Alan Ruck, Christian Slater, Viggo Mortensen, and James Coburn (who actually starred as Pat Garrett in Sam Peckinpah's 1973 film Pat Garrett and Billy the Kid).

The following guns were used in the film Young Guns II:

Billy the Kid (Emilio Estevez) uses a Colt 1878 Thunderer as his main weapon throughout the film; as this was the revolver carried by the real Billy the Kid on his run.

This isn't an actual Thunderer, as all Thunderers were double-action. However, they did have the Bird's Head grip frame, as this (probably Uberti) revolver does.

The "Quick Draw" model of the Single Action Army revolver is the main handgun used by Tom O'Folliard (Balthazar Getty). Billy uses one as well.

The "Cavalry" model of the SAA is carried by Pat Garrett (William Petersen).

The "Cavalry" model of the SAA is carried by Pat Garrett (William Petersen).

One of the bounty hunters (Lee de Broux) ambushed by Billy's gang at the film's beginning is armed with a Smith & Wesson Schofield Model 3.

A bounty hunter (Lee de Broux) ambushed by Billy's gang at the film's beginning is armed with a Smith & Wesson Schofield Model 3.

Billy the Kid and Doc Scurlock (Kiefer Sutherland) are both seen using the Winchester Model 1873 rifle in the film. Many of Garrett's lawmen carry Winchester rifles as well.

Members of Garrett's posse open fire with their Winchesters.

Closeup of the Winchesters.

A Winchester with a saddle ring.

During a shootout, Billy is seen taking up what appears to be a Winchester Model 1876 rifle.

Winchester Model 1876 rifle similar to the one used in the film Tombstone.

Billy with the rifle.

Pat Garrett (William Petersen) holds the Sharps during his time riding with Billy.

John W. Poe (Viggo Mortensen) also carries a Remington-Keene Deluxe Sporter rifle fitted with a scope and with a shortened magazine tube as his sniper rifle in the film, noted by its external hammer mounted on the back of the bolt. Based on the muzzle diameter it appears to be chambered in .45-70. A similar rifle is seen used in The Sons of Katie Elder, Joe Kidd, and Crossfire Trail. 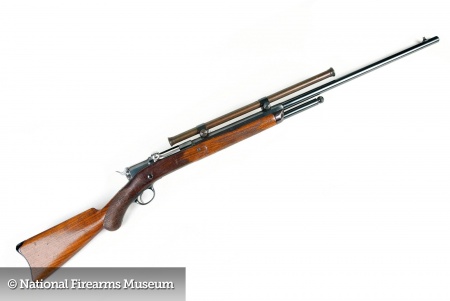 "Arkansas Dave" Rudabaugh (Christian Slater) uses what appear to be dual sawed-off 12 Gauge Double Barreled Shotguns as his weapon of choice for the film. Hendry William French (Alan Ruck) carries one also. Bob Ollinger (Leon Rippy) keeps a shotgun loaded with 18 dimes in each barrel, which Billy would later say is "the best $1.80 I ever spent!" The full-size 12 gauge is seen in the film as well, notably in the hands of Hendry William French (Alan Ruck).

"Arkansas Dave" Rudabaugh (Christian Slater) with one of his Double Barreled Shotguns.

Hendry William French (Alan Ruck) is seen in the back with the shotgun.
Retrieved from "https://www.imfdb.org/index.php?title=Young_Guns_II&oldid=1432026"
Categories: