Tom Clancy's Without Remorse or simply Without Remorse is an Amazon Prime original action-thriller co-written by Taylor Sheridan and Will Staples and directed by Stefano Sollima (Sicario: Day of the Soldado) and is an adaptation of the 1993 thriller novel of the same name written by Tom Clancy. The film stars Michael B. Jordan as US Navy SEAL John Kelly, who uncovers a globe-spanning conspiracy while on a quest to avenge the murder of his wife and unborn child. The cast includes Jamie Bell, Jodie Turner-Smith, Colman Domingo and Guy Pearce. Originally scheduled for a theatrical release on September 18, 2020, Without Remorse was delayed due to the COVID-19 pandemic. Amazon Studios acquired the distribution rights to the film and released it on their streaming service Prime Video on April 30, 2021.

The following weapons were used in the film Without Remorse:

The Heckler & Koch HK416D carbine is carried by the Navy SEALs during the opening operation in Aleppo, Syria. The carbines are seen fitted with 14.5-inch barrels, Magpul PMags, Magpul CTR stocks, optical sights, Magpul RVGs, Surefire M300 Scouts mounted on a Unity Tactical Fusion and a Surefire SOCOM-RC2 556 suppressor. All the HK416D carbines are painted in dark earth camo.

SCPO John Kelly (Michael B. Jordan) is armed with a suppressed Heckler & Koch HK416D carbine with a Leupold Carbine Optic and AN/PEQ-15 ATPIAL during a SEAL mission in Aleppo, Syria.

John holds his Heckler & Koch HK416D carbine after an explosion during the SEAL mission in Aleppo, Syria.

Robert Ritter (Jamie Bell) and other SEALs are armed with Heckler & Koch HK416D carbines during the SEAL mission in Aleppo, Syria.

Closeup of the receiver.

John with the G36K at the left.

Karen Greer (Jodie Turner-Smith) uses what appears to be an IWI Tavor TAR-21 rifle during the mission to Murmansk, Russia.

The AKM is seen in the hands of Syrian soldiers and Russian private military contractors in Aleppo.

While in Syria, a SEAL takes down an enemy fighter armed with an AKM rifle.

An AKMS with rails is used by enemy forces. 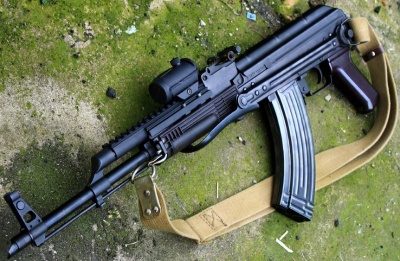 A Russian contractor fire his AKMS in Aleppo.

An Norinco Type 56-1 with rails is used by Russian Military Police soldiers.

Most of the Russian Military Police troops responding to the black op in Murmansk appear to be armed with with AK-74M rifles.

The M4A1 carbine is mostly used by security forces.

US military is seen armed with the M4A1 carbine.

The FN SCAR-L carbine is carried by one of the Navy SEALs during the opening operation in Aleppo.

Zastava M21 rifles with railed handguards and sights are used by members of John's team in Murmansk, including Dallas (Todd Lasance) and Thunder (Jack Kesy).

Thunder (Jack Kesy) readies what appears to be a Zastava M21 rifle.

In the center, Dallas (Todd Lasance) holds what appears to be a Zastava M21 rifle.

Thunder holds what appears to be a Zastava M21 rifle while helping a wounded Dallas.

A gunman opens fire on a car with what a bullpup rifle that resembles a Kel-Tec RFB.

A gunman holds a bullpup rifle that resembles a Kel-Tec RFB.

A Navy honor guard use their M1A rifles for a rifle volley during a military funeral.

A Navy honor guard fires their M1A rifles during a military funeral.

The Heckler & Koch MP7A1 is another weapon used by SEALs during the opening mission in Aleppo. The MP7 is fitted with a sound suppressor and red dot sight.

At the left, a SEAL uses a suppressed Heckler & Koch MP7A1.

A CZ Scorpion Evo 3 A1 is used by Robert Ritter (Jamie Bell) during the mission in Murmansk, Russia. 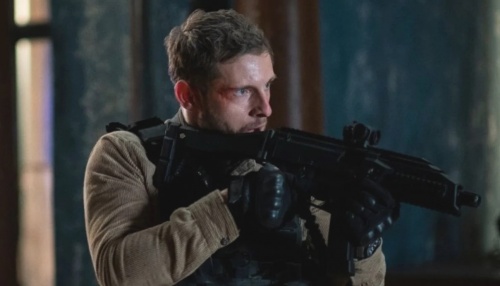 Robert Ritter (Jamie Bell) takes cover with his Scorpion Evo during the shootout in the Murmansk apartment block.

The CZ Scorpion Evo 3 A1 is fired by Robert Ritter (Jamie Bell).

John Kelly (Michael B. Jordan) uses what appears to be a Glock 17 pistol with Salient Arms International parts as his sidearm while on a mission in Syria. Later, he uses the pistol to take down assailants in his home. This pistol appears to be two-tone and is fitted with a Trijicon RMR sight. Suppressed Glock 17 pistols are also used by assassins who invade John's home. 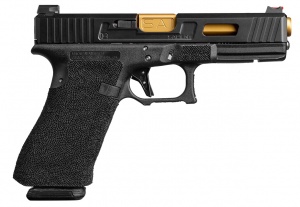 The Glock 17 pistol is seen in lower left after being used by John Kelly (Michael B. Jordan).

The suppressed Glock 17 pistol is seen through a night vision lens.

The Glock 19 is seen used by John Kelly (Michael B. Jordan).

John Kelly (Michael B. Jordan) holds what appears to be a Glock 19 pistol used as his sidearm.

A Glock 19 pistol is seen used by John Kelly (Michael B. Jordan).

A SIG-Sauer P226R pistol is used by John, Karen, and Hatchet during the mission in Murmansk, Russia.

A SIG-Sauer P226R pistol is pointed at Robert Ritter by John.

A sniper uses a Barrett M95 in Murmansk, Russia.

The Barrett M95 in the sniper's nest.

What appears to be a Bushmaster BA50 is used by a sniper in Murmansk, Russia.

A sniper takes cover while holding what appears to be a Bushmaster BA50.

An M249 SAW is seen mounted as a doorgun on the Huey helicopter during the SEAL mission in Aleppo, Syria.

At the left, an M249 SAW is seen mounted as a doorgun on the Huey helicopter during the SEAL mission in Aleppo, Syria.

A RPG-7 is used an enemy fighter in Aleppo. An RPG-7 launcher

An enemy fighter attempts to fire a RPG-7. Note the lack of a warhead loaded into the launcher.

What appears to be an AirTronic RPG-7 launcher (a modernized US manufactured version of the RPG-7) and warheads are found in a cache of weapons.

What appears to be an AirTronic RPG-7 launcher (a modernized US manufactured version of the RPG-7) and warheads are found in a cache of weapons during the SEAL mission in Aleppo, Syria.
Retrieved from "https://www.imfdb.org/index.php?title=Without_Remorse&oldid=1485399"
Categories: