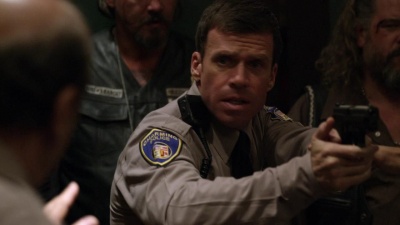 SIG-Sauer P229R as Deputy Chief Hale in Sons of Anarchy.

Taylor Sheridan is an American actor/screenwriter who is best known to television audiences for his role as Deputy Chief Hale in the series Sons of Anarchy. In recent years, he has written several acclaimed screenplays, including for the Academy-Award-nominated film Hell or High Water and Wind River (which he also directed). Sheridan has also is responsible for writing the screenplays for the crime thriller Sicario and its sequel Sicario: Day of the Soldado. He is also the executive producer and creator of the television series Yellowstone and its prequel 1883.

See the Discussion for the media in the IMFDB written and/or directed by Taylor Sheridan.