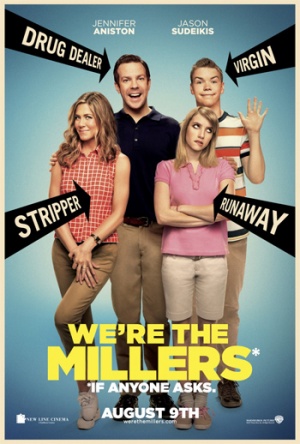 The following weapons were used in the film We're the Millers: 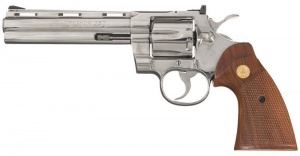 One-Eye puts his revolver to the head of David.

Border Patrol agents has Glock 17s holstered and one CBP agent starts firing at immigrants crossing the border. DEA Agent Don Fitzgerald has a Glock 17 as an standard issue handgun in the DEA, only shown in one scene.

A CBP agent fires his Glock 17 at the border crossers that were hiding under the Millers' RV.

Don's Glock 17 is shown in a holster in his RV's glove compartment. Note the Glock is holstered in a P229R holster.

A SIG-Sauer P229R is used by Pablo Chacon (Tomer Sisley). The pistol also is seen in the hands of David Clark (Jason Sudeikis) before he hands it off to Don. 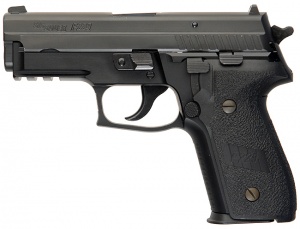 The SIG is put to the head of David Clark (Jason Sudeikis).

A SIG-Sauer P229R is held by Pablo Chacon (Tomer Sisley).

The SIG on the ground.

The pistol also is seen in the hands of David Clark (Jason Sudeikis).

A Cartel member is seen with a Heckler & Koch MP5A2 with a flashlight forend.

MP5A2 wielded by the cartel soldier.

A Cartel member is seen with a Heckler & Koch MP5K with a PDW stock attached.

The PDW slung by the guard on the left.

Pablo Chacon fires a Heckler & Koch UMP45 at the Millers and appears to be his main weapon in the trailers.

Pablo Chacon fires a Heckler & Koch UMP45 on the left.

Pablo with the UMP.

At the right, the UMP is held by One-Eye (Matthew Willig).

Guards at the compound armed with the rifles.

Rifles held by the guards.

Guard with the rifle. Note the distinct hooded front sight.

One-Eye also is seen with an AKS-74U with a synthetic handguard.

On the right, One-Eye also is seen with an AKS-74U with a synthetic handguard.

DEA SWAT agents are seen with Colt M4A1s. Some with ACOG optics.

The launcher mounted on the rifle carried by the guard next to the door.

The AK held by the guard has the launcher mounted underneath.
Retrieved from "https://www.imfdb.org/index.php?title=We%27re_the_Millers&oldid=1453785"
Categories: