From Internet Movie Firearms Database - Guns in Movies, TV and Video Games
(Redirected from The Prestige)
Jump to navigation Jump to search

The Prestige is a 2006 mystery directed by Christopher Nolan and stars Christian Bale and Hugh Jackman as magicians who are both determined to discover the secret behind their rival's illusions. The film's cast also includes Scarlett Johansson, David Bowie, Andy Serkis, and Rebecca Hall.

The following weapons were used in the film The Prestige:

Closeup of the Flintlock pistol as Alfred Borden (Christian Bale) readies the hammer.

Alfred Borden (Christian Bale) tries to convince his wife Sarah (Rebecca Hall) to shoot him with the Flintlock.

Closeup of the Flintlock.

Robert Angier (Hugh Jackman) holds his own Flintlock as he participates in Borden's illusion. 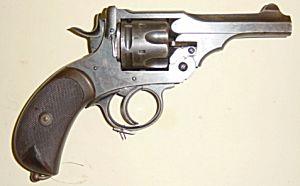 Closeup of the Webley.

The Webley is reached for.

When Robert Angier (Hugh Jackman) visits a restricted area at the film's beginning, Alley (Andy Serkis) comes out armed with a Double Barreled Shotgun before recognizing him.

Alley comes out with his Double Barreled Shotgun.

Alley closes the door with his Double Barreled Shotgun in hand. 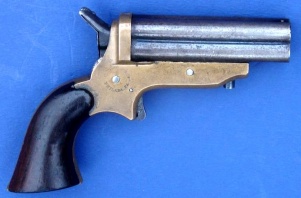 Borden's assistant has the pistol holstered.

The pistol is fired.
Retrieved from "https://www.imfdb.org/index.php?title=Prestige,_The&oldid=1317445"
Categories: