From Internet Movie Firearms Database - Guns in Movies, TV and Video Games
(Redirected from The Postman)
Jump to navigation Jump to search

The following weapons were used in the film The Postman:

The M1911A1 is seen in the hands of Holnists, to include General Bethlehem (Will Patton), and is also used by The Postman (Kevin Costner) when he escapes from the Holnists.

A Holnist prepares to execute the Postman.

Looking at the hammer and the safety, the guns used on the set are probably civilian Government models.

General Bethlehem (Will Patton) carries a Pre-Model 10 Smith & Wesson M&P as his sidearm. The same revolver was used just moments before by Ford Lincoln Mercury (Larenz Tate). It's identifiable as a Pre-Model 10 because of the hammer, front sight and the ejector rod design. 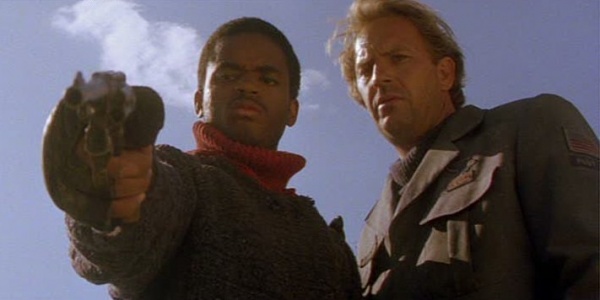 The revolver is handed off to The Postman by Ford Lincoln Mercury.

The Holnists use Colt AR-15 Sporter I Carbines, fitted with mock flash moderators to pass for XM177E2s, that are subsequently taken and used by several other characters including The Postman (Kevin Costner) as well as Abby (Olivia Williams). They were seen firing in semi-auto, further indicating that they are mocked-up civilian models (that in this instance weren't converted to full auto). In a brief continuity error, the Sporter 1 taken from an unconscious Holnist by Abby has a standard 16" barrel and A1 flash hider, but changes back to a faux XM177E2 the next time she's shown with it.

The Postman (Kevin Costner) holds the XM177 (mocked up from a Sporter I Carbine).

The Postman takes aim at ambushed Holnists with his carbine. This shot clearly shows the SP1-style 'slickside' upper receiver (no forward assist or shell deflector) and 'slabside' lower receiver (no 'fencing' around the magazine release).

The Sporter 1 on the ground after Abby knocks out its owner. Note 16" barrel and A1 flash hider.

A Holnist pursuing The Postman and Abby during their escape from Benning is armed with a Colt AR-15 Sporter II also mocked up as an XM177E2. The Postman later holds this carbine when encountering "Ponytail" (played by Costner's daughter Anne) in the woods.

A Holnist holds the Sporter II on Abbey. Note the forward assist.

The Postman holds the Sporter II on Ponytail, though he isn't much of a threat considering the bolt carrier is locked back on an empty chamber.

An M1 Carbine is carried by the Postman (Kevin Costner) at the beginning of the film. He loses it when he gets captured and it's never seen again. Near the end of the movie members of the Postman's army can be seen carrying M1 Carbines as well.

Korean War Era M1 Carbine, with birch stock, adjustable sight and bayonet lug - .30 Carbine. Most of the World War 2 variations of the M1 Carbine were sent back to government arsenals and retrofitted with the bayonet lug and adjustable rear sight. This is the version seen after late 1945 and all the way until the 1960s.

The Postman (Kevin Costner) walks through the remains of Salt Lake City with his faithful mule Bill and his trusty M1 Carbine. 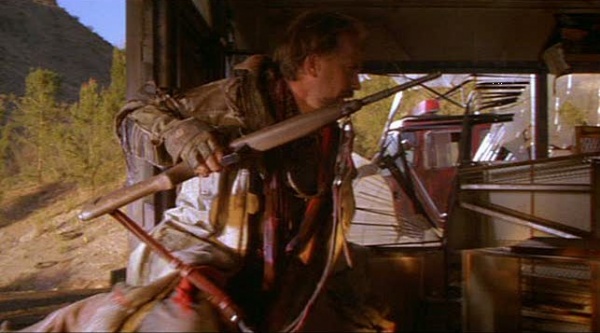 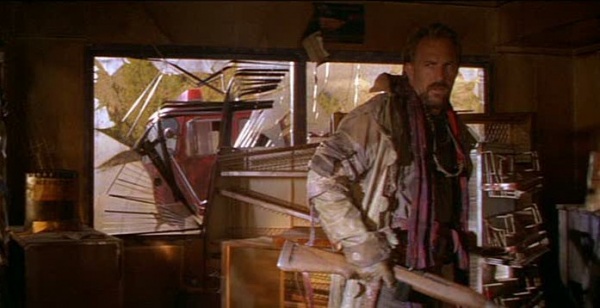 The Postman looks around inside the gas station with his M1 Carbine at his side. 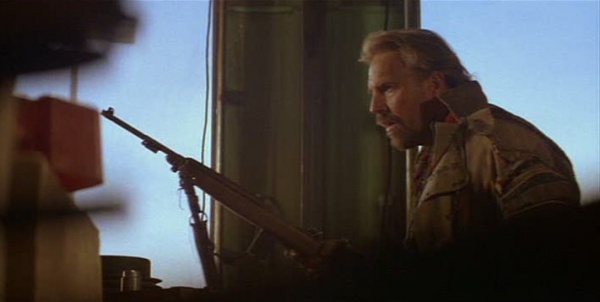 The Postman readies his M1 Carbine. This shot shows the bayonet lug and adjustable rear sight, indicating it is a 'post-war'(World War II) variant.

Springfield Armory M1As are seen in the hands of Ford Lincoln Mercury (Larenz Tate) as well as other followers of The Postman (Kevin Costner).

Ford Lincoln Mercury (Larenz Tate) aims his M1A at a retreating Holnist. Note the lack of selector notch on the stock, indicating this as a civilian-spec commerically-built rifle.

The Postman's followers armed with M1As during the film's climax.

M1As are shown being prepared for the impending confrontation with the Holnists.

A scoped Winchester Model 70 rifle is used by the Holnist Mercer (Rex Linn).

A Winchester 1894 Saddle Ring Carbine is carried, and used, by Colonel Getty (Joe Santos) of the Holnist Army. 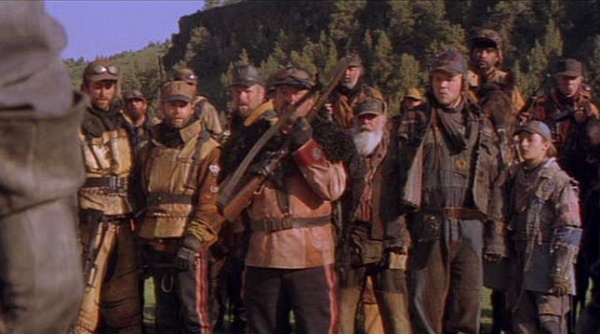 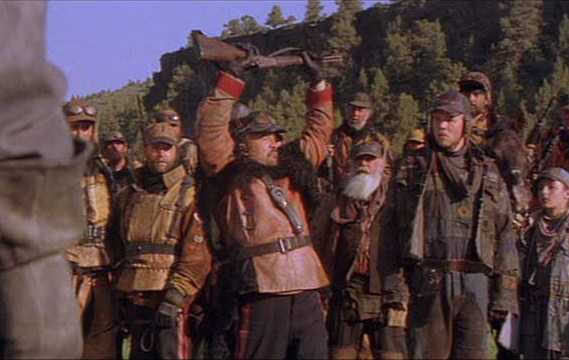 Getty raises his Winchester 1894 in surrender. 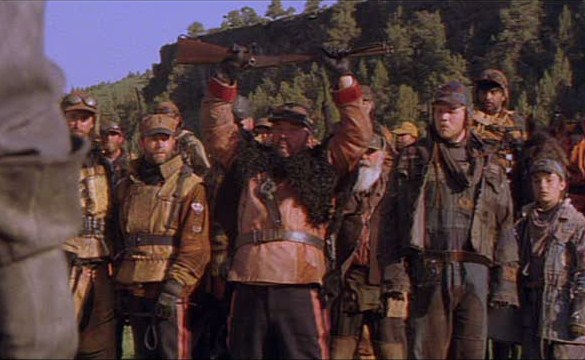 One of the Holnist soldiers is armed with what appears to be an FN FAL with mounted Cobray CM203 (standing in for the M203 grenade launcher). This appears to possibly be one of the same prop weapons previously used in the film Escape from L.A.. 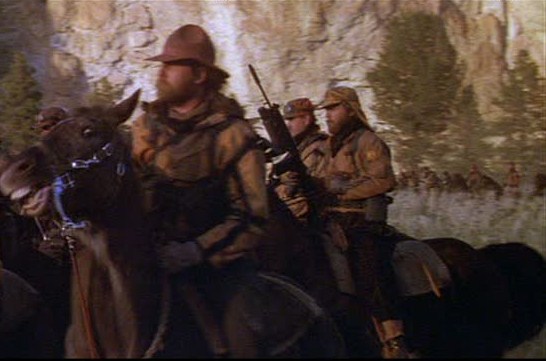 The Holnist soldier with his possible FN FAL with the underbarrel M203 Grenade Launcher.

M16A1 rifles can be seen being carried by Holnist soldiers in the background. 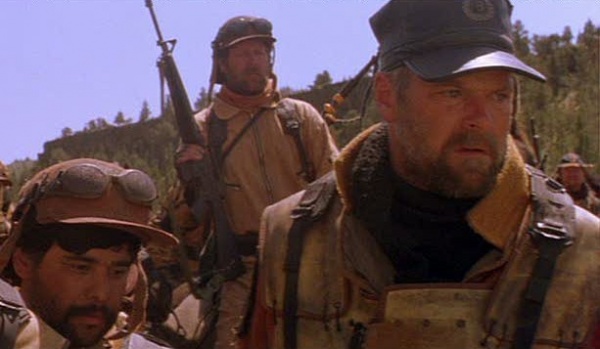 The Holonist soldier in the background with his M16A1 rifle.

One of the many Holnist soldiers appears to be carrying an AK-47 variant, but it's too blurry to definitively identify.

Note what appears to be an AK-47 variant being carried by one of the Holnist soldiers over Col. Getty's (Joe Santos) right shoulder on the far left.

A Mossberg 500 shotgun is seen in the hands of Sheriff Briscoe (Daniel von Bargen).

Sheriff Briscoe intimidates the Postman with his Mossberg 500.

A 12 Gauge Double Barreled Shotgun is carried by Old George (Ron McLarty) during the movie's climax.

An Ithaca 37 shotgun is used by Old George (Ron McLarty) at the Ambush at Elvis Dam.

The Holnists use a Oerlikon 20mm Cannon to destroy the town of Benning.

Holnists prepare to turn Benning into Swiss cheese with the Oerlikon.
Retrieved from "https://www.imfdb.org/index.php?title=Postman,_The&oldid=1441341"
Categories: