From Internet Movie Firearms Database - Guns in Movies, TV and Video Games
(Redirected from The Mummy (2017))
Jump to navigation Jump to search

The Mummy is the 2017 adventure fantasy film starring Tom Cruise as Nick Morton, Annabelle Wallis as Jennifer "Jenny" Halsey, Sofia Boutella as Egyptian princess Ahmanet (the film's titular mummy), and Russell Crowe as Dr. Henry Jekyll. This is a reboot of The Mummy film franchise and was supposed to be the first film in Universal's "Dark Universe", but those plans were scrapped after it became a box-office bomb.

The SIG-Sauer P226 Combat TB appears to be the pistol carried by Nick Morton (Tom Cruise). 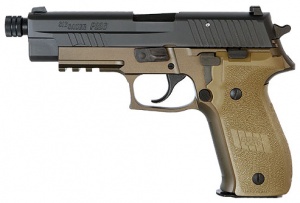 The SIG-Sauer P226 Combat TB appears to be the pistol used by Nick Morton (Tom Cruise).

On the left, U.S. MP aboard the C-130 Hercules transporting Ahmanet's (Sofia Boutella) sarcophagus has the Beretta 92FS (standing in for the military M9) in a chest holster.

Nick holds his SCAR-L while evading an RPG rocket.

Vail fires his SCAR-L at camel spiders in the tomb.

At the right, U.S. troops in Iraq carry the M4A1 Carbine.

Mounted atop a vehicle is a DShK Heavy Machine Gun.

The DShK being fired.

The RPG-7 is used by enemy fighters.