From Internet Movie Firearms Database - Guns in Movies, TV and Video Games
(Redirected from The Lincoln Lawyer (2011))
Jump to navigation Jump to search

The Lincoln Lawyer is the 2011 feature film adaptation of the Michael Connelly crime novel of the same name and stars Matthew McConaughey as Mickey Haller, a Los Angeles lawyer who operates out of the trunk of his Lincoln Town Car, and now finds himself representing a wealthy client who claims he was framed for a murder he didn't commit. Michael Connelly also wrote the novel Blood Work and a series of crime/detective novels featuring Harry Bosch. On May 13, 2022, The Lincoln Lawyer was adapted as a Netflix streaming series starring Manuel Garcia-Rulfo as Mickey Haller.

The following weapons were used in the film The Lincoln Lawyer: 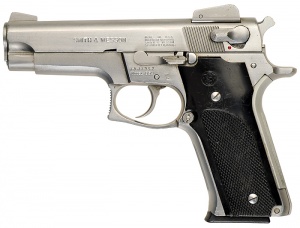 The Colt Woodsman is seen on the floor.
Retrieved from "https://www.imfdb.org/index.php?title=Lincoln_Lawyer,_The_(2011)&oldid=1515349"
Categories: