From Internet Movie Firearms Database - Guns in Movies, TV and Video Games
(Redirected from The Darkest Hour)
Jump to navigation Jump to search 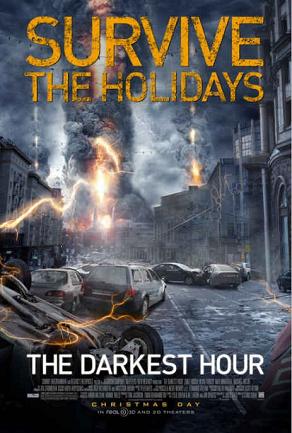 The Darkest Hour is a science-fiction film directed by Chris Gorak and produced by Timur Bekmambetov (Wanted, Abraham Lincoln: Vampire Hunter) about a group of American tourists who are trapped in Moscow when the world is invaded by invisible, energy-consuming aliens.

A Militsiya (Police) officer fires a Makarov PM at one of the aliens in the beginning, to no avail as it disintegrates the bullet without causing any damage. During the movie several characters are seen with PM pistols, mostly holstered.

The Militsiya (Police) officer fires his Makarov after seeing his fellow officer disintegrate.

Close up of the Makarov as the trigger is pulled by the officer.

Matvei (Gosha Kutsenko), leader of the resistance group carries a Stechkin APS as his personal sidearm, firing it (sensibly) in semi-automatic at the aliens near the ending. 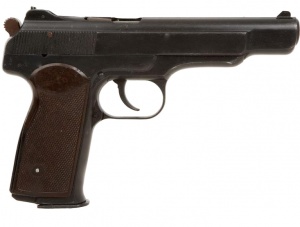 Matvei (Gosha Kutsenko) fires his APS at one of the aliens. 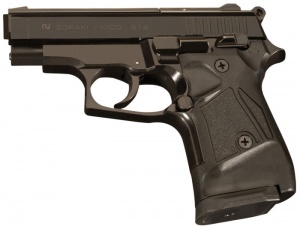 Vika (Veronika Vernadskaya) aims her Zoraki 914 pistol at the American tourists. This is a blank-firing only gun likely standing in for a real gun or for safety reasons when wielding at/around other actors.

Vika lowers the gun down.

Two AKS-74 rifles are seen in the trunk of a police car that Sean (Emile Hirsch) and Ben (Max Minghella) hide behind after obtaining flares and a map. Later one of the resistance fighters, Sasha (Nikolay Efremov), is seen using AKS-74.

Two AKS-74 rifles can be seen in the trunk of the police car behind Sean and Ben.

When Sean and the tourists head to the bay they encounter resistance fighters Matvei (Gosha Kutsenko) and Yuri (Artur Smolyaninov) who are both seen with AK-74M rifles to battle the aliens. Yuri fires his AK-74M at the aliens in the final battle.

Matvei (Gosha Kutsenko) on horseback holds the AK-74M assault rifle with stock in folded position. Both he and his horse are in makeshift suits of conductive materials.

Yuri (Artur Smolyaninov) aims his AK-74M as the alien approaches. He wears a suit of conductive materials to prevent the aliens from seeing him.

Yuri open fires his AK-74M at the alien.

When the tourists enter the U.S. embassy, dozens of M4A1 carbines are seen scattered next to empty shell casings. Skyler (Joel Kinnaman) picks one up and wildly fires it as rubble drops in front of him and the American tourists. Skyler carries the M4 with him after he leaves.

Skyler holds the M4A1 after picking it up at the U.S. embassy. Note the buttstock appears to be extended all the way out to the point of falling off. The rifle also appears without it's magazine despite being seen in the gun earlier and during Skyler's frantic firing.

Skyler fires the M4A1 Carbine at the alien.

The MK 18 carbine can be seen on the box in the building of the U.S. embassy.

In the top part of the U.S. embassy, a first pattern M249 SAW can be seen leaning against a wall on top of a box the tourist pass by.

The M249 SAW can be seen on the box in the building of the U.S. embassy.

A Barrett M99 can be seen at the top bunker of the U.S. embassy without an optic attached. When the tourists take a view outside, they use what appears to be the rifle's scope as a binocular.

The Barrett M99 is seen left behind girls. Note it lacks an optic.

Boris is ready to open fire 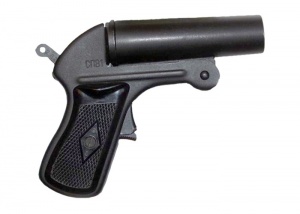 Then looks at the flare pistol. Note the red barrel breech and black grip frame.

Sasha (Nikolay Efremov) uses the M2 flamethrower against the alien.

Sasha (Nikolay Efremov) with the flamethrower after firing.