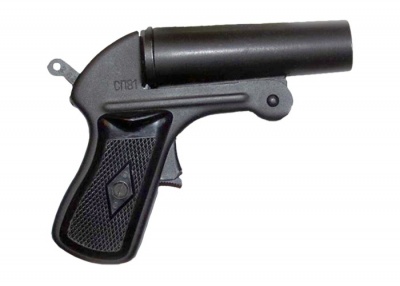 The SP-81 ("Signal pistol model 1981") is a Soviet/Russian flare gun, developed in 1980 and adopted in 1981, produced by Kovrov plant/ZiD. Created as a replacement for the SPSh-44, it actually represents its more compact version. It can be equipped by holster with a cartridge belt for ten charges.

Like its predecessor, the SP-81 also exists in the AL-1 line-thrower configuration.

It is also worth noting that the SP-81 was one of the few flare guns that had a combat version. In 1994, by special permission of the MAI, for truckers transporting especially valuable cargo, a version with an elongated heavy barrel, adapted for KS-23 charges, was released. The regular cartridge was the "Volna-R". The order was for 10,000, it is not known how much was actually produced.

The SP81 Flare Pistol and variants can be seen in the following films, television series, video games, and anime used by the following actors: