A Quiet Outpost (Tikhaya zastava) is a 2011 Russian war movie directed by Sergey Makhovikov. The story is based on real events that took place in July 13, 1993 on the Tajikistan-Afghanistan border where a Russian border guard outpost was attacked by Islamic radicals (after Tajikistan became an independent state, Russian border guards were still stationed on the former USSR's southern border until Tajikistan formed its own border guard in the late 1990s).

The following weapons were used in the film A Quiet Outpost (Tikhaya zastava):

The commander of the outpost, Capt. Pankov (Andrey Chadov), and Praporshik (Petty Officer) Gritsyuk (Sergey Selin) carry Makarov PM pistols. They are only seen in holsters. 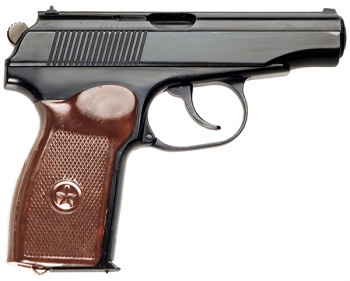 In one scene, Lyuba (Larisa Shakhvorostova) fires a stainless steel pistol that appears to be an EKOL Tuna, a blank-firing replica pistol based on the FIE Titan. 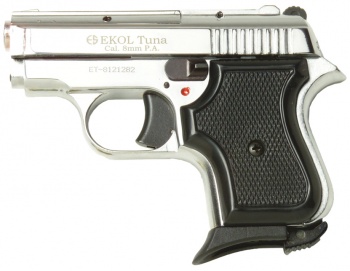 Fayzullo (Faridunsho Rakhmatulloyev), the leader of the Islamists, carries a pistol in a large holster. Only a small part of the grip can be seen.

Praporshik Gritsyuk (Sergey Selin) holds an AKS-74 with a GP-25.

An Islamist with an AKS-74 waits in ambush.

One of the soldiers of Lt. Bobrovskiy's unit holds an AKS-74 with GP-25. Note the bandage pack fitted to the folding stock.

Lt. Bobrovskiy holds an AKS-74 with GP-25 and "jungle style" taped magazines. The folding stock of his AKS is wrapped with rubber bands.

One of the soldiers of Lt. Bobrovskiy's unit fires his AKS-74.

An Islamist fires his AKS-74.

Some Russian border guards and Islamists are armed with AK-74 assault rifles.

A Russian border guard holds an AK-74 with wooden furniture.

An Islamist at the foreground fires an AK-74.

AKMs are seen in the hands of several Islamists at the center.

Sgt. Durov (Yuri Konovalov) and a sniper of the Spetsnaz unit are armed with SVD sniper rifles.

A close-up view of Durov's SVD.

The Spetsnaz sniper aims. His SVD is covered by a camouflage wrapping.

Durov with an SVD in the final scene.

During the battle, Sgt. "Trasser" Kiryanov (Aleksandr Alyoshkin) fires a PKM machine gun fitted with a bipod. In the final scene, the PKM is seen in the hands of Capt. Pankov (Andrey Chadov). A PKM is also seen mounted on an Mi-8 helicopter.

A closer view of the machine gun.

"Trasser" fires the PKM during the battle.

A wounded Pankov tries to fire the machine gun.

A PKT machine gun is coaxially mounted on a BTR-80 along with a KPVT. A PKT is also seen in the nose mounting of an Mi-8 helicopter.

A PKT is mounted on an Mi-8. Such usage of the PKT was quite common during the Afghan War and local conflicts of the 1990s-2000s.

A PKT is mounted coaxial with next to a KPVT.

A KPVT heavy machine gun is mounted on a BTR-80.

A close-up view of KPVT. 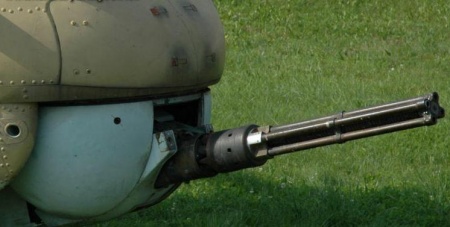 A wounded Spetsnaz soldier prepares to blow himself and the enemies up with his last grenade.

One of the soldiers of Bobrovskiy's unit holds an AKS-74 with GP-25.

During the battle, Islamists use RPG-26 rocket launchers.

A side view of the RPG.

2B14 Podnos Mortars are used by Islamists during the attack on the outpost. Lt. Bobrovskiy (Igor Savochkin) and his Spetsnaz unit capture three mortars and use them. 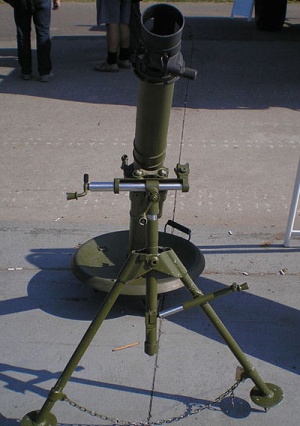 They assemble the mortar on position.

A support is attached to the barrel.

The mortar is loaded.

A closer view of the muzzle.

Lt. Bobrovskiy and his men at the mortar position.

In one scene, a border guard soldier signals to a helicopter by firing an SP81 Flare Pistol. 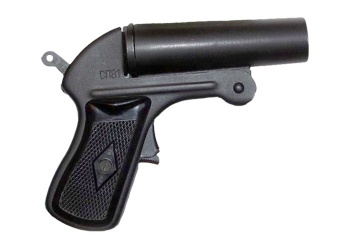 In one scene, a Russian border guard plants an SM signal mine.