Boys in Company C, The

From Internet Movie Firearms Database - Guns in Movies, TV and Video Games
(Redirected from The Boys in Company C)
Jump to navigation Jump to search 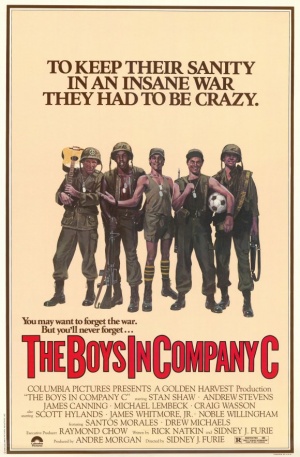 The Boys in Company C is a 1978 Vietnam War satire that focuses on a group of young US Marines from their initiation into boot camp through their yearlong tour in Vietnam. The film co-starred Stan Shaw, Andrew Stevens, James Whitmore Jr., Michael Lembeck and featured the acting debut of R. Lee Ermey, who played a boot camp drill instructor nine years before his role in Full Metal Jacket. The film was directed by Sidney J. Furie, who went on to direct the Vietnam War-themed films Purple Hearts, The Veteran (2006), and Going Back.

The following weapons were used in the film The Boys in Company C:

The recruits with their M16A1's during rifle drills for Gunnery Sgt. Loyce (R. Lee Ermey).

Tyrone (Stan Shaw) holds the M16A1. The rifle is anachronistic for the time period of the film, as well as the use of the 30-round "banana" magazine.

ARVN troops armed with the rifle.

On the left, Captain Collins (Scott Hylands) holds the rifle.

Some of the Marines in the film appear to carry the M16 (SP1) rifle noted by its "slab-side" receiver. Just as seen in 1978's Apocalypse Now (which was also filmed in the Philippines around the same time), the use of the M16 is an error as the original M16 was never used by the United States Marine Corps or any other branch of the US Military other than the Air Force.

The African-American Marine in the middle appears to carry an M16 instead of the A1 of the other troops.

The M60 machine gun is carried by several US Marines in the film, notably by Billy Ray Pike (Andrew Stevens) and Vinnie Fazio (Michael Lembeck). It's also seen mounted on US armored vehicles.

An M60 is fired above the heads of Marine recruits. This is supposed to be a live-fire exercise, but the rounds seen here appear to be blanks.

A Marine opens fire with the vehicle-mounted M60.

The M60D is seen mounted on the Huey in the background.

Other shot of the Huey with its guns.

Several Browning M2HB heavy machine guns are seen in the film mounted in US Armored Personnel Carriers and other vehicles. Tyrone Washington (Stan Shaw) is notably seen pointing an M2 at an inept officer.

An M2 machine gun is seen mounted on the M151 Jeep in the foreground.

An M2HB is seen mounted on the APC.

Lt. Archer (James Whitmore Jr.) holds the M1911A1 on an Army soldier to keep him from launching any more mortar rounds.

The pistol is held by Gunnery Sergeant Curry (Noble Willingham).

What appears to be a High Standard K-100 Shotgun with a pistol grip and short barrel is carried by Gunnery Sergeant Curry (Noble Willingham) in the film.

Gunny on the left with the shotgun.

The ejection port of the shotgun is seen in the lower left.

An M72 LAW is seen used by Tyrone to take out an enemy machine gun position.

An M72 LAW is seen used by Tyrone to take out an enemy machine gun position.

The M79 grenade launcher is held by Tyrone and Billy Ray when the men in the company take out an enemy machine gun position.

The M79 grenade launcher is held by Billy Ray when the men in the company take out an enemy machine gun position.
Retrieved from "https://www.imfdb.org/index.php?title=Boys_in_Company_C,_The&oldid=1482165"
Categories: