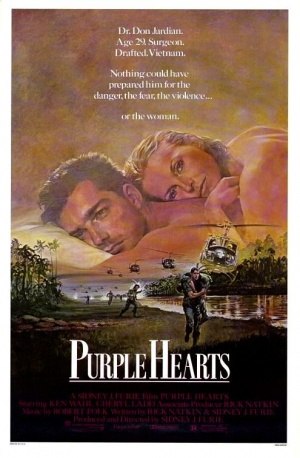 Purple Hearts is a 1984 war romance starring Ken Wahl as a Navy doctor and Cheryl Ladd as a Navy nurse who find love in the midst of the Vietnam War. Directed by Sidney J. Furie, the film also features R. Lee Ermey as a Marine gunnery sergeant.

The following weapons were used in the film Purple Hearts:

The M14 rifle is primarily carried by the Gunny (R. Lee Ermey).

Gunny (R. Lee Ermey) carries the M14 as he goes out on patrol.

Gunny with the M14 as he's about to go check on his men. Note that his helmet cover appears to be of WWII vintage instead of the Mitchell Pattern cover worn in Vietnam.

Gunny and other Marines open fire with their M14's.

The M16A1 rifle, with 30-round magazines are seen used by both US Marines and American Special Forces as well as by Dr. Don Jardian (Ken Wahl).

The RTO in the foreground carries the M16A1.

A shootout in a warehouse involves several M16A1's.

The M60 machine gun is used by US Marines in the film.

A Marine wields his M60 during the assault.

The M60D machine gun appears in the film door-mounted on UH-1 Huey helicopters.

Brenner (Paul McCrane) mans the M60D as a Huey doorgunner.

NVA forces are armed with Norinco Type 56 rifles throughout the film.

Several Browning M2HB heavy machine guns are seen used during the attack on the Marine outpost.

The M2 is mounted in a machine gun nest.
Retrieved from "https://www.imfdb.org/index.php?title=Purple_Hearts&oldid=1048368"
Categories: